Updated on 12.18, 9:15 am: There have been seven Star Wars films since The Empire Strikes Back, which opened on 5.21.80. For 39 years I’ve been hoping for another that would be as good. None of them have made the grade, and that includes Star Wars: The Rise of Skywalker, which I saw yesterday afternoon.

I was talking with a critic friend a few hours later, and he said something I more or less agreed with. He said “it’s okay.” That’s a fair way of putting it. And not a put-down.

I didn’t mind the classic fan-friendly stuff (echoes and replays of A New Hope, Empire and Return of the Jedi). There’s a whole lot of this in the second half, but the first half…yeesh. Director J.J. Abrams pushes the action along in such a crazy-ass, pell-mell, Mexican jumping bean way I had a headache within minutes.

Then again Rise is a somewhat better film than Abrams’ The Force Awakens. Or the last 45 to 50 minutes are, at least.

But that first hour is rough. “I don’t think I can take this,” I was muttering to myself. “If it doesn’t slow down I might have to…I don’t know, hit the lobby, walk around, check my phone messages.” But I manned up and toughed it out.

The Rise of Skywalker finally slowed down and became more or less coherent around…oh, the 75-minute mark, somewhere around there.

I took some notes after it ended and sent them to a friend. I won’t spoil anything important, I promise.

“J.J. levitated the [redacted] out of the water and used the exact same John Williams music…great!

“And he re-did the Return of the Jedi finale on the forest planet of Endor with love, joy, hugs and great relief. And he included a lesbian couple kissing and hugging. (A real quickie.) But he also brought back [redacted]!  I thought I’d seen the last of those guys.

“And I loved returning to a certain desert-like planet…

“I still don’t get why Kylo Ren has to wear a face-shield helmet. Darth Vader did so because his face was disfigured; Ren has a huge schnozz but otherwise has nothing to mitigate.

“Who’s the overweight bearded guy who plays one of the rebel pilots?” It turns out he’s Greg Grunberg.

“Emperor Palpatine was thrown into a black void by Darth Vader at the end of Return of the Jedi. Does anybody ever stay dead in these films? Back in the early ’80s dead Star Wars characters (such as Obi Wan Kenobi) would return as ghostly see-through figures with ice-blue lines around their edges. This happens again in The Rise of Skywalker but that’s all I can say.

“And yet there’s one character who returns from the dead who isn’t ghost-like…okay, I’ll stop.

“I’m sorry but I’m not much for burying valuable stuff, especially light sabers.  Who buries classic weapons?  There are too many dangerous characters out there. Keep those sabres around just in case.

“At the end of Robocop Dan O’Herlihy says to Robocop, “That’s some pretty good shootin’, son — what’s your name?” and Robocop says “Murphy”. Remember that? There’s an homage to that scene in Skywalker.

In the old Tarzan films of the ’30s, there were at least one or two instances of a dire situation being saved when Tarzan let go with his jungle yell and all the animals came to the rescue as a kind of unified army. Abrams also includes a hat tip to this.

“After it ended a producer friend told me about an alleged affair that happened between costars in The Force Awakens. The rumor goes that Carrie Fisher said to Harrison Ford, ‘There seems to be something happening between those two.’  Ford allegedly replied, ‘You know what?  I wish them well.’

“Daisy Ridley’s nose is so straight and narrow and perfect.” End of notes.

Look, I’m just not the right guy to ask about the quality of this or that Star Wars film, okay? I’m the wrong man for the job. All I know is whether it’s Empire Strikes Back-level or not, and this isn’t.

But the last 45 or 50 minutes are really nutso. It even gets to the point of “oh my God” crazy, and so crazy in one scene that the audience laughed in a kind of “we give up” way.

Like I said before I was going insane and sinking into depression during the manic first hour, but Rise gradually calmed down and I settled in. I just wish that the idea of death was respected more.

As the prequels and sequels have unfurled, the Star Wars franchise has become less of an Empire vs. rebels thing that believes in The Force and more about the conflicts and currents of a royal family. You’re my son…we’re brother and sister…another bad guy has sired a certain hero, etc.

That’s all I have to say for now. I’ll come up with more as stuff occurs to me. 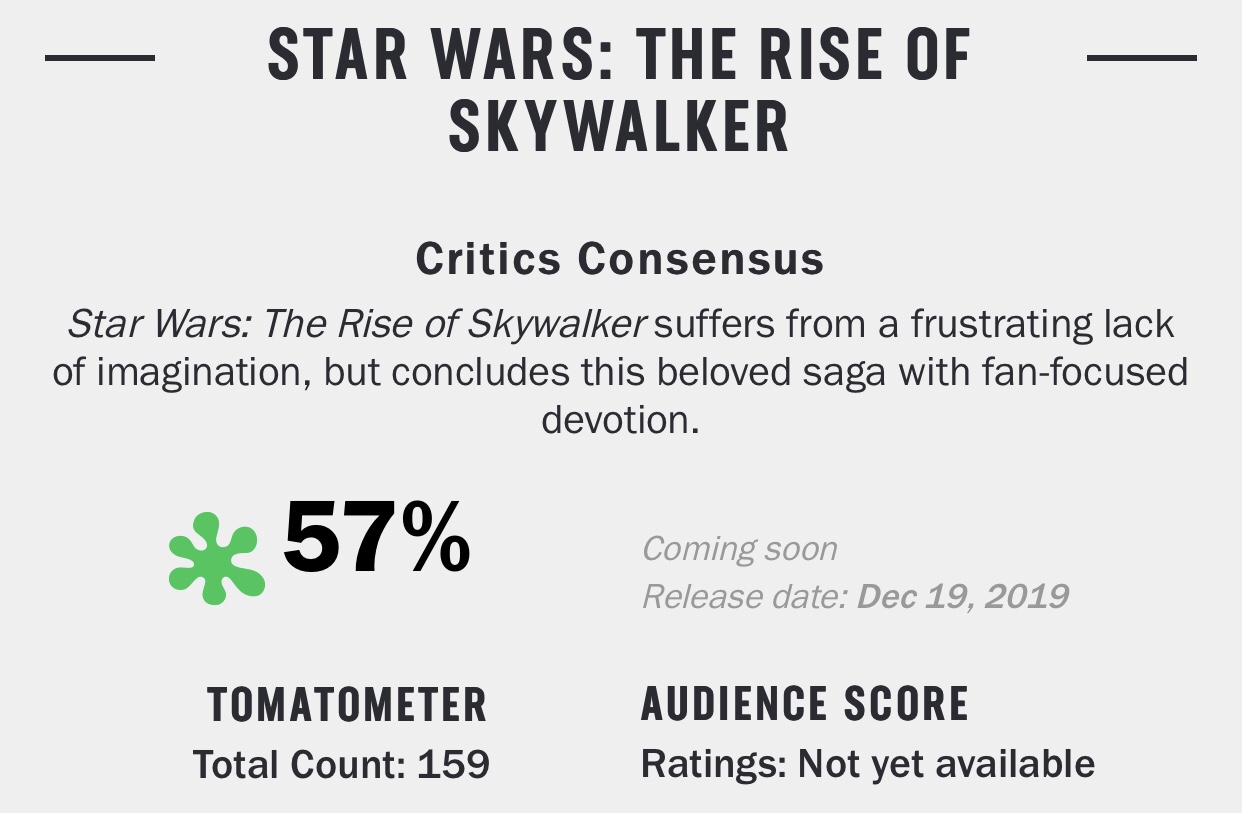 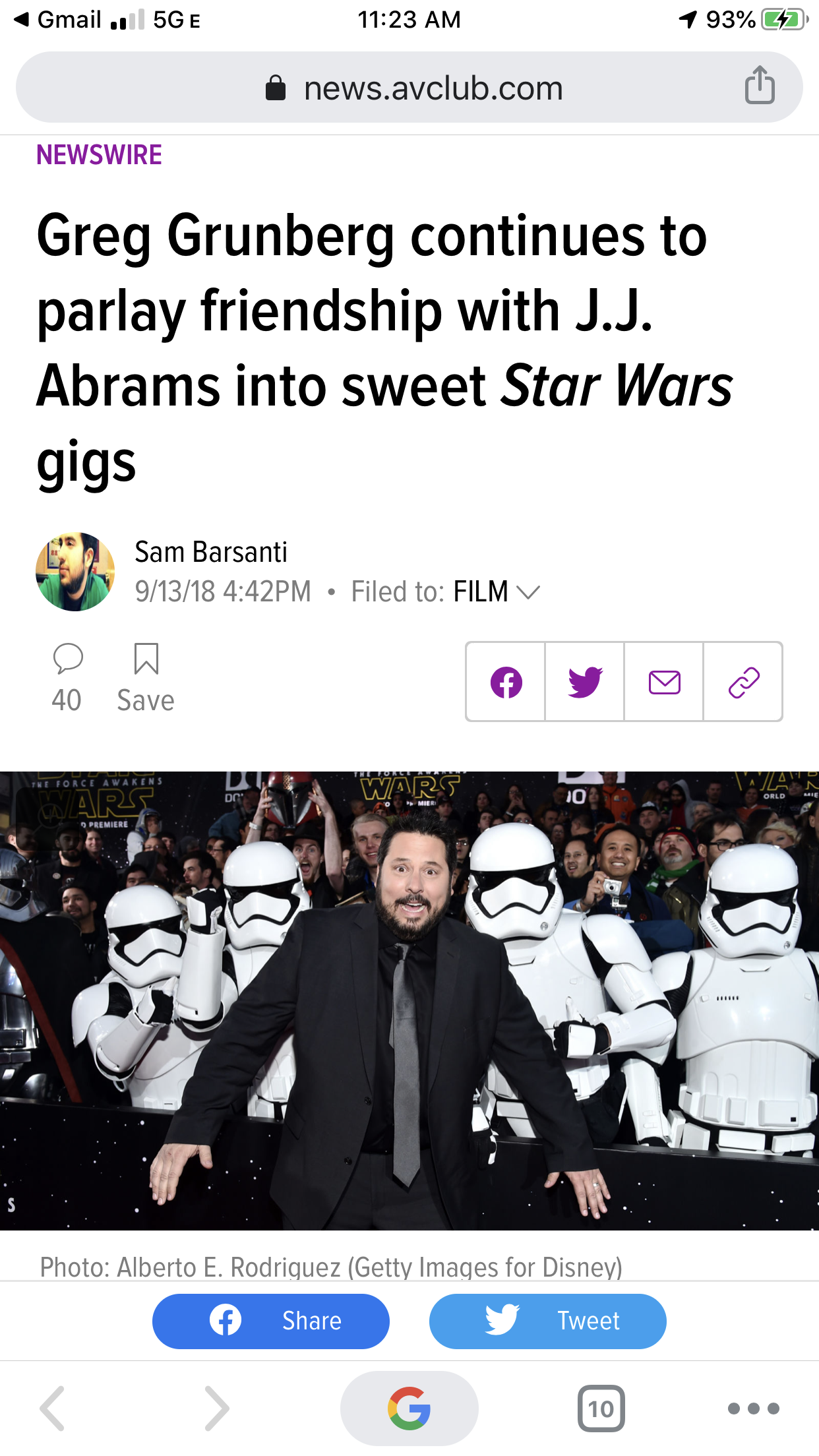