I attended last night’s THR “Awards Chat” interview with The Irishman‘s Al Pacino and the intrepid Scott Feinberg. It was fairly lively and amusing as Pacino interviews go. Al turns on the “personality” and the hoo-hah and makes everyone laugh as he re-performs his classic tales while dispensing an accasional fresh line. The show was supposed to begin at 7 pm but Al was late so it started around 7:20 pm and ended…oh, 85 or 90 minutes later.

Scott’s interviews are basically about biographical recap, so he started with Al’s early days and got heavily into the early to mid ’70s, and then Scarface and then the mid ’80s drop-out period, and then Al’s return to glory with Sea of Love (’89). But before you knew it there were maybe 15 minutes left and the last 30 years to cover, so suddenly Scott is racing through Al’s resume and summarizing like a gatling gun.

My favorite Al tale is the one about Diane Keaton vs. Pacino’s attorney (i.e., “He’s crazy!”). Pacino began to tell the great “Buddy Rich drum solo at Carnegie Hall” story, but seconds into it he remembered that he’d just performed this one three weeks ago at the Santa Barbara Film Festival Martin Scorsese dinner and that some may have seen it on YouTube, so he shortened it and told the story a different way. 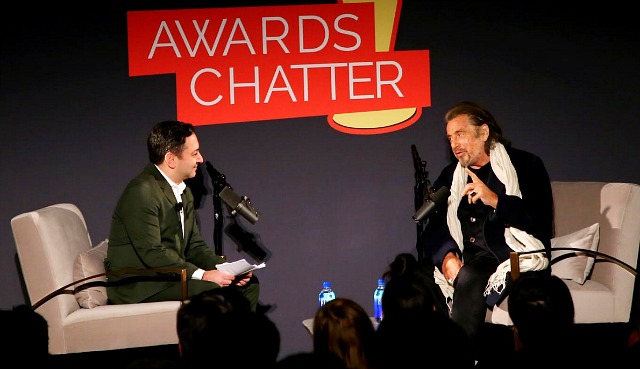 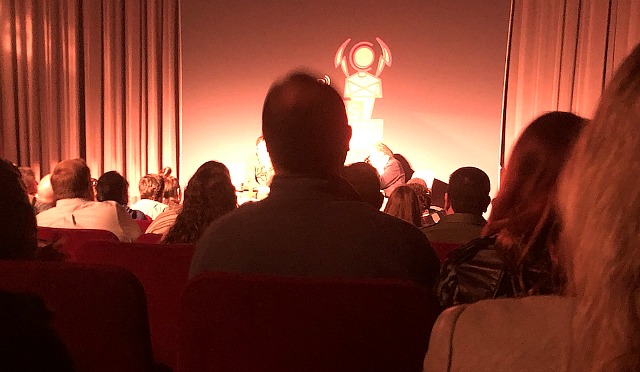 The loud, over-reacting fathead who was sitting two rows ahead of me at last night’s DGA interview.

Al has fast, cat-like reflexes — thinks on his feet like a Reno poker dealer.

Unfortunately I was sitting behind a loud superfan type. A guy who had to cheer and laugh too loudly and go “ahhh!” and “whoo-whoo!” every time Al shared a funny line or whenever a well-regarded Pacino classic was mentioned. This is what happens when you let non-professional riff-raff attend these events. Seriously — this guy was a real animal.

Once or twice this 40ish muttonhead (who was wearing a short beard, glasses and a green sweater, and had a kind of pudgebod physique) hopped up and down in his seat like an excited four-year-old. At one point this fool raised his fist in the air like he was cheering a prizefighter. His long-suffering wife or girlfriend, sitting to his right, was quiet as a churchmouse — I was sensing that she was embarassed for the guy and felt she had to be extra-restrained in order to compensate for his behavior.

The bottom line from my perspective is that I was watching a three-person encounter — Pacino, Feinberg and this excitable fanboy. This sack of potatoes was a lot louder than Pacino or Feinberg and certainly more energetic, and after a while I saying to myself “Oh, Jesus Christ, this is awful…this guy is ruining the whole thing.” It was because of this ayehole that I spent half of the time listening and half Twitter-surfing. I couldn’t entirely focus because that would have meant letting this idiot into my head.

Al told his Diane Keaton vs. Pacino attorney money story when he sat down with Feinberg five years ago. It starts at 30:00 — a goodie.