There’s one interesting thing about Jay Roach‘s Bombshell (Lionsgate, 12.13) that I haven’t mentioned, and it’s a pretty good trick when you think about it.

There’s no disputing that Fox News has been a malevolent cultural force in this country, generating rancid rightwing spin for over 20 years now, and that the late Roger Ailes did everything possible to trash President Barack Obama during his two terms and block every initiative of his center-moderate agenda. Worst of all, Fox News did more than any other entity to inflame rural bumblefucks and pump them up for the candidacy of Donald Trump.

Look where we are now, thanks to the Foxies — the country convulsing over the criminal reign of the most destructive sociopath president in U.S. history. 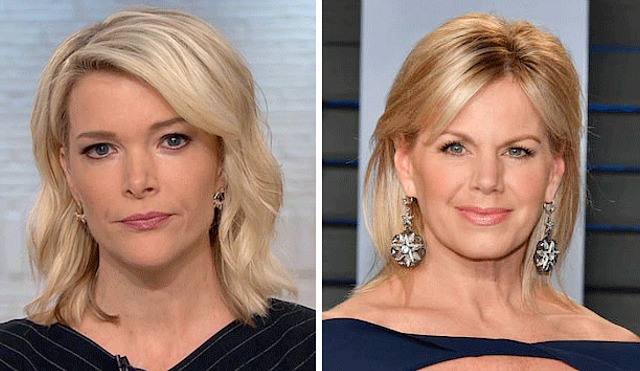 What Bombshell manages to do, then, is present lead protagonists Megyn Kelly (Charlize Theron) and Gretchen Carlson (Nicole Kidman) — a pair of charismatic on-camera professionals who contributed to the anti-Obama poisoning of the political waters and blew toxic rightwing smoke on a daily, dedicated basis…what Bombshell manages to do is make you forget that these women are no one’s idea of noble or heroic or even fair-minded as far as disseminating the news was concerned.

Any viewer would and should feel empathy for Kelly and Carlson’s situation with the sexually predatory Ailes, but it’s hard not to feel conflicted at the same time. Because Kelly and Carlson served an agenda that pushed racist, highly questionable, xenophobic propaganda.

Slate‘s Dana Stevens: “I can think of more important whistleblower stories than Megyn Kelly’s. A person with a platform that size who uses her on-air time to argue vehemently that Santa Claus is white just isn’t that exciting to root for. No one deserves to be harassed at work, and the fact these women banded together to bring down an enormously powerful and malignant man is admirable. That doesn’t mean I want to spend two hours gazing at Megyn’s seemingly poreless face as she wrestles with whether and how to tell her truth, while continuing to play a highly public part in a media ecosystem based on lies.”

This aside, my positive feelings about Bombshell have remained the same. 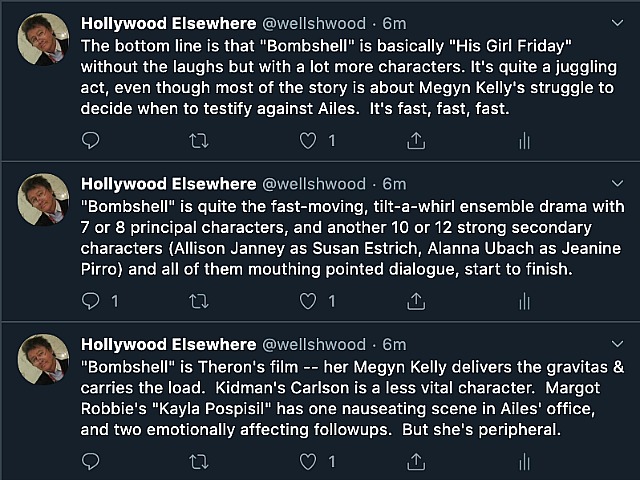 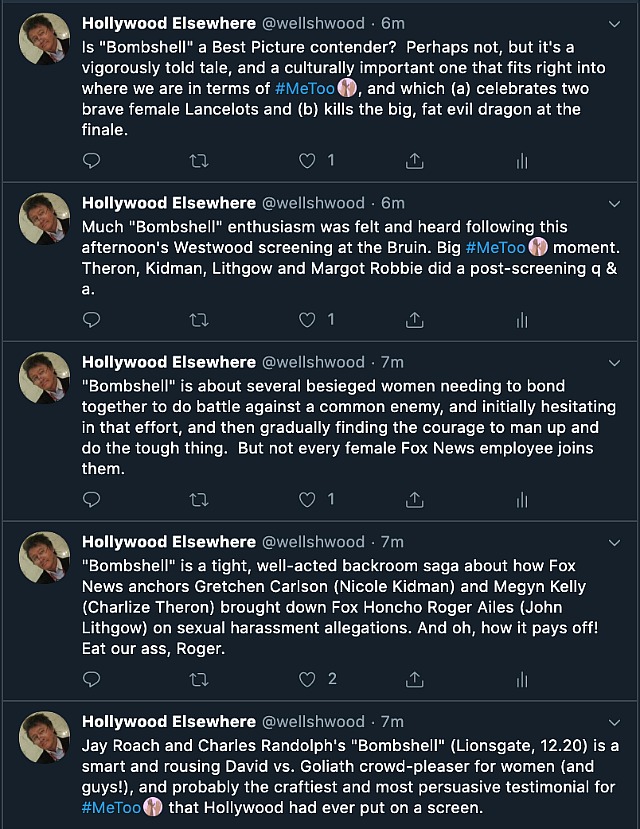