Aunt Gloria Spells It Out

Signed, sealed, delivered — the African American community has decided that Typewriter Joe will be the Democratic presidential candidate. They’re basically saying to X-factor white liberals like myself, “The Iowa caucus isn’t until February 3rd, followed by New Hampshire, South Carolina and then Super Tuesday on March 3rd, but it’s over…it’s settled. You’re going to take Joe Biden and like him.”

I’m a Pete Buttigieg guy, but if we’re taking 60something candidates Tom Steyer would be far preferable to Biden, and if we’re talking 70-plus I’d much rather see Michael Bloomberg become the Democratic candidate. I like and admire Bernie Sanders, but I don’t believe this country is ready to put a tax-and-spend Jewish Democratic Socialist who wants the U.S. of A. to become Finland, as much as I would personally be down with that.

Either way AA voters have decided that it’s Droolin’ Joe, period. And that’s the name of that tune.

“What this new Washington Post-Ipsos poll of African Americans voters has done is confirm that my Aunt Gloria has her finger on the pulse of black America.

“At the family barbecue, I asked why she thought Biden was the person to take on Trump. Her answer left me slack-jawed and remains the best explanation for Biden’s continued strength. ‘The way the system is set up now, there is so much racism that it’s going to have to be an old white person to go after an old white person,’ Aunt Gloria said. ‘Old-school against old-school.'” — from 1.11 Jonathan Capehart column, “Joe Biden leads among black voters for a reason.” 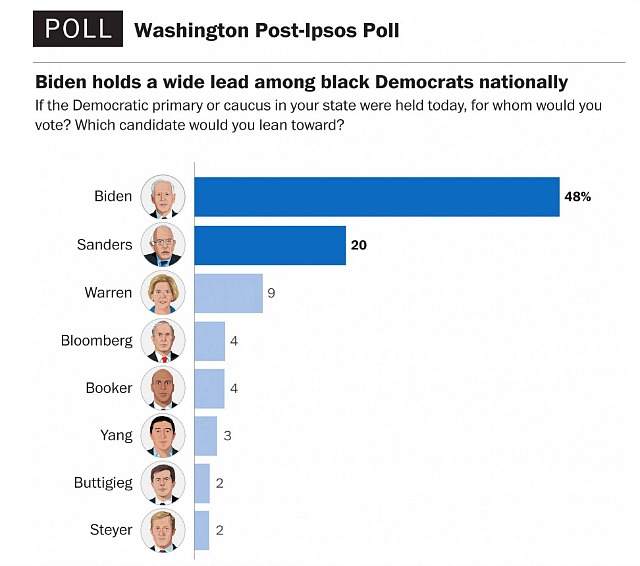