Kantemir Balagov, the director of the much-admired Beanpole, is only 28 years old (and his appearance suggests he could be even younger). But he’s already delivering the studied chops and immaculate directorial control that are par for the course among accomplished directors twice his age.

How intense is Beanpole? How invested, how richly composed, how well acted, how Klimovian, how Kubrickian, how immersive? “Very” on all counts. A psychological survival tale set in Leningrad just after the ravages of World War II, it’s probably the fiercest and darkest post-war drama made in the 21st Century.

Hollywood Elsewhere sat down with Balagov a while back, and it’s fair to say he doesn’t default to the usual animated, occasionally jokey, “delighted to be here” repartee. He sits there and waits for your questions and answers them, politely but curtly. And that’s it. He doesn’t feel he has to augment or supplement. He’s a first-rater and knows it. A mixture of confidence and patience. 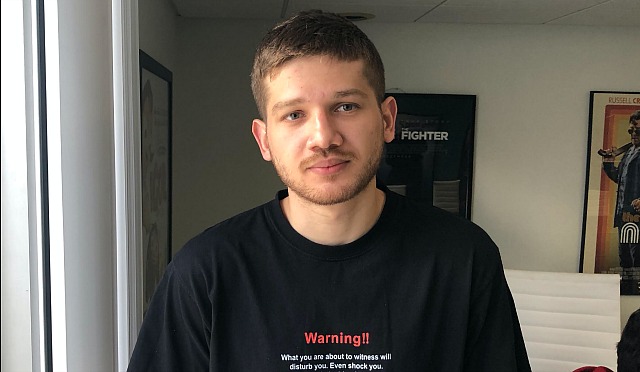 Balagov is quite the portraitist and, to go by a just-posted Variety interview, quite the film scholar.

Is it fair to call Beanpole gloomy? Yes, but also riveting. I felt sorrow and pity for each and every character, of course. But the tone is solemn and somewhat oppressive. And yet, given the context, this is probably necessary.

Viktoria Miroshnichenko‘s titular character, Iya, is an all-but-catatonic giraffe from whom verbal expression does not easily emanate. Why must she take 30 to 45 seconds to collect her thoughts before answering the simplest questions? Because that’s Balagov’s intention — to convey her destroyed inner state with traumatized expressions, gut feelings and minimal dialogue.

Vasilisa Perelygina‘s Masha, Iya’s best friend, is far more interesting — more expressive and generally more alluring. If Perelygina had played the lead (which is to say if Iya had been eliminated), I would be a bigger fan of Beanpole. In my estimation she’s a natural movie star.

But not Viktoria. Iya is impenetrable and burdensome and, as far as the afore-mentioned death of the child is concerned, inexplicable and even hateful.
The ghastly murder of Masha’s young son is “addressed” but not really dealt with, and I was simply unable to get past this.

Balagov’s idea, I gather, is that if a character is profoundly devastated by war trauma, it’s within her realm to accidentally smother an innocent. In basic emotional movie-watching terms that’s simply not acceptable.

The principal characters (excepting a 50-year-old doctor and the rich, chilly parents of Masha’s amorous suitor, a dorky kid who has a nose like Vladmir Putin) are all numb and haunted-looking, which of course is fitting and necessary. This is not a film about steady keels and bright futures.

If I was mixed on Beanpole, other were ecstatic. After it screened in Cannes last May (in the Un Certain Regard section), Balagov won a Best Director Award and FIPRESCI prize.

Balagov comes from a little Russian burgh called Nalchik. Imagine how easy it would have been to just stay there and live a life of limited consequence. But instead he made a series of 10-minute short films that appeared on YouTube. This led to film study at Kabardino-Balkar University in Nalchik. And gradually his first feature, Closeness (’17), a dark kidnapping drama set in a sodden Russian backwater.

Beanpole is just as grim if not grimmer than Closeness, but it’s also more ambitious in an atmospheric, large-canvas sense. And a whole lot sadder.

If Beanpole is finally a movie for film festival and arthouse dweebs than for guys like myself, it is certainly the kind of studied, ultra-textured film that scholars, film critics and film festival honchos will always understand and admire. Balagov is a heavyweight. He has decades of impressive accomplishments ahead of him. This much is certain.

Tatyana’s assessment: “Since I was eight years old or thereabouts I was very fond of reading books about the Soviet Union’s experience of World War II and particularly about the siege of Leningrad, which lasted almost 900 days and was horrible for so many with civilians slowly dying from cold and the lack of food.

“I can recall two titles — ‘The Dawns Are Quite Here’ by Boris Vasilyev, and ‘Only Tanya is left (The Diary of Tanya Savicheva).’

“What struck me about Beanpole is how Kantemir Balagov, a relatively young man, was able to dig so deep and truly reveal the feminine essence: the desire to live, love and care for someone. I loved both characters and couldn’t stop crying at the moments when they just wanted to forget the war horror and all the darkness they had to go through (especially Masha) and just be happy.

“I respect and admire Balagov. After I had seen Closeness in Telluride I knew that a new star had appeared in the Russian sky.

“No one has showed the war through the eyes of women in this dramatically penetrating way. We always see heroism of men soldiers who sacrificed their lives, their broken souls and bodies but never a woman’s attitude.

“I also loved the doctor who used euthanasia to stop sufferings of the crippled soldiers. It was of course a criminal thing to do but in my opinion the only humane thing to help.”