If you could easily move into any home or apartment in which a movie character resides, what would you select? A recent Facebook thread asked this question, and believe it or not the author said he’d like to live in Scotty Ferguson‘s Vertigo apartment in San Francisco.

The guy has his pick of any residence in the movie world, including Robert Downey, Jr.‘s houseboat in Zodiac, the gaudy Tony Montana mansion in Scarface, Robert De Niro‘s seaside home in Heat, Joe Starrett‘s cabin in Shane and Xanadu in Citizen Kane, and he chooses an unexceptional and rather pokey one-bedroom apartment at 900 Lombard (at Jones)?

Hollywood Elsewhere is torn between (a) Kristen Stewart‘s small Paris apartment in Personal Shopper, (b) the mountainside John Robie home in To Catch A Thief (which Sasha Stone and I actually visited in 2011), (c) the Frank Lloyd Wright-inspired VanDamm home in North by Northwest, and (d) Lionel Barrymore‘s ramshackle hotel in Key Largo.

No, I wouldn’t like to live in that 19th Century Knives Out mansion. I love that cozy third-floor area where Chris Plummer wrote and slept, but otherwise it’s too big, too cavernous, too costly to heat. 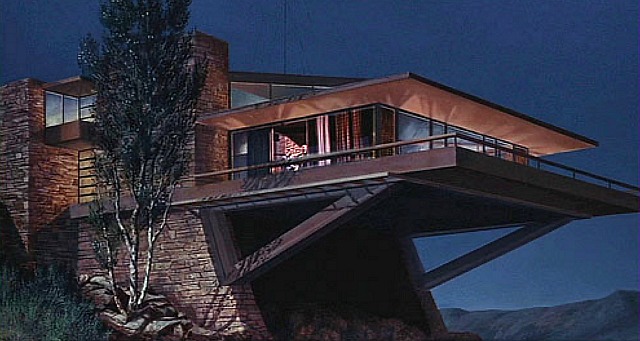