Greta Gerwig during a Waldorf Astoria round-table interview for Noah Baumbach‘s Greenberg, snapped sometime in mid January 2010). My first question to her was “speaking as a veteran, how would you define mumblecore?” I can’t find the mp3 but her answer was clear and concise. 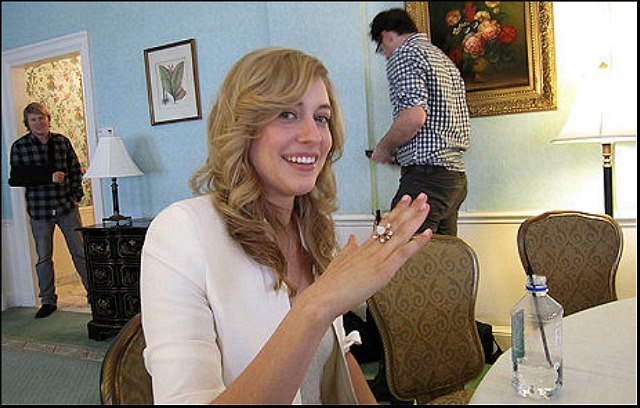 I spoke this morning with Greenberg star Ben Stiller inside a semi-quiet restaurant (i.e., not really quiet enough) adjacent to the Waldorf Astoria’s main lobby. It went well, perhaps of my certainty that Stiller delivers the performance of his career in Noah Baumbach‘s intensely granular film about midlife stagnation and L.A. loneliness. No ambiguity in your head means calm and clarity.

Greenberg (Focus Features, 3.19 limited) is easily the most intriguing film of the new year, and more than worth a tumble. It doesn’t exactly “entertain,” and yet it does — it’s just operating in a low-key way that’s almost entirely about observation, and without a single false note. If your girlfriend doesn’t like it (and she may not), you may want to think about dumping her. Seriously. Because Greenberg is about what a lot of 30ish and 40ish people who haven’t achieved fame and fortune are going through, or will go through. It’s dryly amusing at times, but it’s not kidding around.

Greenberg is a fascinating character-driven drama about Roger Greenberg (Stiller), a neurotic 41 year-old who’s caretaking his younger brother’s Los Angeles home while the brother and his family are on a vacation in Vietnam. It’s mainly about a curious attract-repel relationship between Greenberg and the brother’s gangly, emotionally vulnerable assistant (Greta Gerwig), and an amiable ex-musician friend (Rhys Ifans) with whom Greenberg shares various confessions/reflections.

Things don’t “happen” as much as we learn more and more about Greenberg’s internals. The basic drill is that he’s become stuck in a moderately unhappy fall-back position in his life, and is close to astonished that things haven’t turned out as well as he thought they might when he was younger. He blew a shot at being in a successful rock band in his 20s, we’re told, and is now working as a carpenter in Brooklyn. Not miserable but neurotic and fickle, and certainly not content.

Is Greenberg funny? In a LQTM sense, yeah, but to most people LQTM isn’t what they go to movies for. I do, however. I was quietly smirking at Greenberg the whole time, having a quiet little blast with it. And then it grew on me the second time. I didn’t realize how sublime the ending is until I saw it again. That’s my fault.

What is clear from the start is that for Stiller’s Greenberg, carpentry won’t do. He’s too much of an artist-searcher complainer, and it’s not enough to anesthetize the demons. The film reminds that when you have a hungry visionary Bengal tiger inside you, you’d best express it or the tiger will eat you up from within. That or you’ll start collapsing bit by bit.

I know that tune myself. My main job in my early to mid 20s was trimming trees, which didn’t work for me either. At all. I was fucking around on the margins as a party-hound and a rock-band drummer and a chaser of skirt. And the Bengal tiger began to growl more and more loudly — let me out! — and I began to see myself as a failure because I wasn’t trying hard enough to make that happen.

I’d told Stiller earlier that I was impressed with how deeply Greenberg just settles in with the manner and psychology of Stiller’s character without feeling the need to go all “story” on the audience. A genuinely ballsy move on Noah’s part. The humor is so subdued and embedded within situation and milieu that it’s not humor — it’s John Cassevetes-like introspection. I’m obviously saying that with respect.

Stiller’s performance, in any event, seems to me like a landmark-type thing — a seriously ego-free inhabiting of antsy-quirk neuroticism. Being, not acting, and certainly with any audience comfort-winks. A breakthrough of some kind.

If there’s a rowdy commercial horse laugh in Greenberg, I missed it — and bravo to that. I didn’t “laugh” when I saw it, but I was constantly LQTM-ing by way of surprisingly intimate recognition. I felt that I was communing in part with my late brother, Tony. Greenberg is nothing if not relentlessly itself, and never seems to go for schtick of any kind. Personal recognition laughter, as most of us know, is never “hah-hah-hah.” As Michael O’Donoghue once said, making people laugh is the lowest form of humor.

“I think you connected in the same way with the movie that we all did while making it,” Stiller replied in an e-mail — eloquently, I thought. “I too recognize Greenberg, and I have to say I’ve never had an experience like this, where a character was so specifically written, and I ended up feeling a connection with that aspect of myself. I actually feel protective of him — or maybe that aspect of people I love who have not had the good fortune to have outward success or acknowledgement in this world. It can be very painful, just to get through the days. To get past your own self imposed barriers, that are all very real.

“I feel very fortunate to have had this experience, and I love Noah for it. He is a truly good person, who as you said did something brave in movies now — allowing the character’s real, incremental growth, to be the story. I learned a lot from him.”