When it comes to 2020 Oscar nominations, Hollywood Elsewhere is partly run-of-the-mill and partly…well, a bit peculiar. In some ways I’m a lot like Scott Feinberg, and more similar than not to Sasha Stone. But I’m everybody’s brother and son. I ain’t much different from anyone. Well, in some ways I am.

Advance warning: Bong Joon-ho‘s over-praised social dramedy will wind up Best Picture nominated (along with a locked nom for Best International Feature), but it must not and can not win in the former category…no!

Best Picture in order of likelihood: The Irishman, Once Upon a Time in Hollywood, 1917, Parasite, Joker, Marriage Story (6). Outliers: Little Women (will a series of impassioned journalist columns and the ever-present Twitter fervor push it through?), Jojo Rabbit (too broad, too comedically tidy, lacking in boldness), Ford v Ferrari (respectable character-driven drama, excellent race-car footage), Knives Out (VERY clever, first-rate popcorn whodunit), Uncut Gems (an endurance test to sit through, the Safdies are sadists). (5) 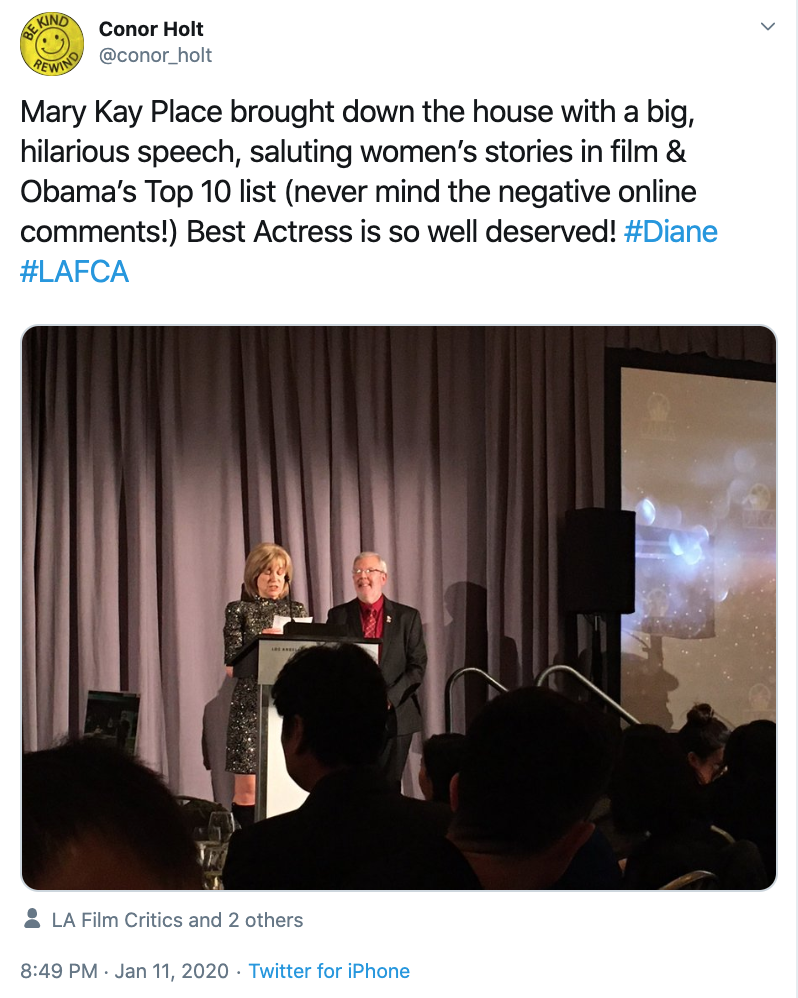 Not happening: Leonardo DiCaprio, Once Upon a Time in Hollywood (nobody has said boo about Leo’s performance — all the heat has been about Brad).

Forget it: Lupita Nyong’o, Us. Not a chance: Cynthia Erivo, Harriet.

Best Supporting Actor in order of likelihood: Brad Pitt, Once Upon a Time in Hollywood; Al Pacino, The Irishman; Joe Pesci, The Irishman (will cancel each other out), Tom Hanks, A Beautiful Day in the Neighborhood; Jamie Foxx, Just Mercy.

Should be nominated but won’t be: Julia Butters, Once Upon a Time in Hollywood.

Unworthy contenders: Scarlett Johansson, Jojo Rabbit (because her character was hung?); Margot Robbie, Bombshell (because Roger Ailes humiliates her in that one agonizing scene?); Nicole Kidman, Bombshell (because she delivers a prim-and-proper performance that she could have performed in her sleep?).

Call me bullish, biased or delusional, but I refuse to take this man out of my Oscar predictions. pic.twitter.com/hgr0B6xrAr

January 12, 2020by Jeffrey Wells31 Comments
« Previous post
Say It Wasn’t So, Joe
Next post »
Death Of A Culture