This morning “handsome solo” posted a hard–nosed comment about Quentin Tarantino‘s “beautiful angel” depiction of Sharon Tate in Once Upon A Time in Hollywood. He was promptly derided as a “misogynistic troll” for, as one commenter claimed, saying that in the actual world Tate “had it coming because she was no saint.”

Solo (who has since deleted his post) didn’t say or mean that. Allow me to elaborate.

Solo’s basic assessment is correct. Tarantino created a Sharon Tate lacking in any recognizably adult specifics, certainly in any kind of closely observed, semi-complex fashion. She’s more of an alpha vibe than a person. All she does in the film, really, is flash that radiant smile and listen to Paul Revere and the Raiders and bop around and have a good time.

There’s not even an attempt at some kind of interesting definition or shading in QT’s Tate dialogue. No texture, no hints, no unspoken conveyances…nothing. Remove the tragic fate aspect (which we all supply on our own, of course, except for those Millennial and GenZ dingbats I heard about who reportedly didn’t get the ending) and she’s basically presented as a glowing cypher in go-go boots. 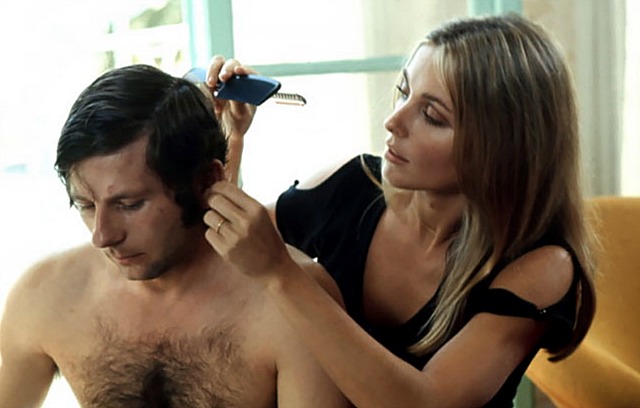 Once Upon A Time in Hollywood was never intended to be any kind of portrait of Tate and Polanski — it’s a portrait of Rick Dalton and Cliff Booth. But you know what? That N.Y. Times stringer who challenged Tarantino at the Cannes Film Festival press conference wasn’t just whistling dixie.

Are you telling me that if, say, Eric Roth, Robert Towne, Diablo Cody, Paul Schrader, William Goldman, Susannah Grant, Jay Presson Allen, Tom Stoppard, Paddy Chayefsky, Joseph L. Mankiewicz, Leigh Brackett, Greta Gerwig, James L. Brooks or the Lawrence Kasdan of the ’80s and ’90s had written their own versions of Once Upon A Time in Hollywood (i.e., sticking to the basic bones but adding embroidery here and there) that they would have written Tate as a rich hippie-chick Barbie doll?

Sharon Tate was in fact a driven woman with a presumably complex inner life. She was certainly more than just a blissed-out ditzoid. She was a limited (you could say mediocre) actress in a somewhat turbulent marriage. She and Roman Polanski had their infidelities. Hair stylist Jay Sebring was in love with Tate. He knew Polanski was to some extent an aloof and selfish husband, more tethered to his work than to Sharon, and so Sebring was just waiting for an opportunity to move in.

Tarantino isn’t ignorant of Tate’s personality and history and ups and downs, but he certainly chose to ignore them. All you get from the film is that QT wanted to be as kind and cherishing and chivalrous as possible to poor Sharon, considering what actually happened to her.

That said, saving her life (and that of Sebring, Abigail Folger, Wojciech Frykowski and Steven Parent) at the very end is quite welcome and in fact constitutes one of the happiest endings ever delivered by a mainstream, big-budget film in this century. This is the spark of my initial affection for Once after catching it in Cannes, and partly why I’m still a fan.

Excerpt from “Tate Soup,” posted on 3.22.18: “Tarantino doesn’t do research. He doesn’t do realism or history. Everything he’s ever written and directed has been pulled straight out of his ass.

“As intriguing as this project sounds, Tarantino is incapable of playing it even semi-straight. He’s not a docu-dramatist — he’s a creator of alternate Quentinworld fantasies. His last three films have mined the past — Inglourious Basterds, Django Unchained and The Hateful Eight — and each time he’s reimagined and re-dialogued history in order to transform his tales into his own brand of ’70s exploitation cinema. Why should QT play his cards any differently with the Manson family?”