Reader comment: “I hate to say this, but Pete needs to drop out now. Along with Warren and Klobuchar [and Steyer and Bloomberg]. The goodwill Pete would earn would do a lot for his future.”

His point was that stopping Bernie the Destroyer is the paramount thing above all, and that if the left-moderate voters could focus entirely on Biden there’s a half-assed chance that Bernie’s momentum might be slowed down or even sputter out.

HE to reader: “Disheartening as your suggestion feels to me right now, Pete sacrificing his candidacy in order to stop Sanders may be the smartest move he could make right now. Of course, Buttigieg and the others will stay the course until after Super Tuesday.”

Bernie Sanders may survive his first four-year term as President. Then again who knows? He’s a tough old goat, and he might trudge on through. But he’s also a 78 year-old man who had a heart attack five months ago. And the odds don’t seem to favor his being in robust health at the start of a theoretical second term in January ’25, when he’d be 84.

From Chris Cillizza‘s “The Delicate Issue for Bernie Sanders That His Democratic Opponents Won’t Touch,” posted on 2.28.20

“The scrutiny applied to a front-running candidate covers their policy positions, their personality and preparedness for the nation’s top job, and yes, even their health.

“Consider what President Donald Trump would do with the issue of Sanders’ health, given (a) that Sanders had a well-documented heart attack last fall while campaigning in Nevada and (b) the way in which Trump tried to make Hillary Clinton’s health an issue in 2016.”

Consider a 2.21 Slate piece by Jeremy Samuel Faust, titled “What Are the Chances Sanders Has Another Heart Attack Before November?”

Excerpt #1: “I considered the risk that, between now and Nov. 3, Sanders might experience any of the following: a second heart attack, another life-threatening emergency, any event that would require hospitalization (including any “false alarm”), or even death. The risk is not trivial, and is worth explaining in full.

“First, there appears to be little evidence that Sanders’ current health is a hindrance to the daily rigors of a national campaign. Considering the extent of his heart attack in October, he appears to be doing well, able to campaign vigorously, and likely up to the demanding position of president, from an endurance standpoint at least.

“Nor is his life expectancy the central question, though, yes, his remaining expected life span dropped from around 10 to five years after his heart attack.”

“But his one-year risk is low, meaning his chance of surviving the campaign is good. When Sanders entered the hospital in October (given what we’ve been told by his doctors), his calculated six-month risk of death was rather harrowing, likely between 11 and 19 percent. Fortunately, by virtue of surviving his initial hospitalization, and the incident-free intervening four months, those numbers have improved, to better than 95 percent.”

Excerpt #2: “Using Medicare claims data, researchers at Yale analyzed millions of patients who suffered heart attacks like Sanders’. (As an aside, using adjectives like mild, moderate, or severe to describe Sanders’ heart attack is not helpful. What we can say is that these researchers were looking precisely at patients like Sanders who had experienced approximately the same problem as his, in the same time frame.)

“Here’s what they found: From the day they left the hospital, the one-year risk of at least one rehospitalization for any reason in Medicare beneficiaries who suffered a heart attack like Sanders’ was about 50 percent (the baseline annual risk among his age cohort is more like 1 in 6).

“Again, by virtue of four incident-free months on the trail, that number is now lower for Sanders. But his chance of another hospitalization between now and November alone likely remains between 30–35 percent. While the daily risk is low, around 0.17 percent, we have more than 250 days to go until Election Day. The risks add up.”

Who in the HE community has the courage to stand up and tell the #MeToo kowtow crowd that they’ve gone overboard in their praise for a decent shock-scare flick?

“Unraveling the dusted bandages of H.G. Wells’ classic 1897 science-fiction novel, writer-director Leigh Whannell has refashioned The Invisible Man as a bracingly modern #MeToo allegory that, despite its brutal craft, rings hollow. Whannell has the talent and cunning to turn The Invisible Man into a chilling and well-crafted B-movie. But if you’re looking for anything more than that, you’ll probably come up empty.” — AP critic Jake Coyle. 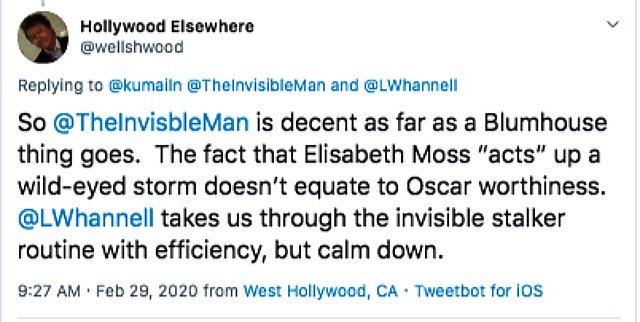 There are two vaguely irksome problems with “And Then He Kissed Me“, the 1963 doo-wop song that became legendary when Martin Scorsese used it to score the famous Copacabana tracking shot in Goodfellas.

The naive and drippy lyrics (written by Phil Spector, Ellie Greenwich and Jeff Barry) comprise irksome problem #1. Irksome problem #2 is the lead vocal track by the proficient Dolores “LaLa” Brooks, whose nasal singing style serves to underline the banality of the fairy tale that the song is selling.

But the arrangement by the legendary Jack Nitzche is rhapsodic and transportational — so much so that the song works better without the vocals. Not to mention the engineering by Larry “Wall of Sound” Levine. The song was recorded at Gold Star Studios (6252 Santa Monica Blvd., near Vine Street) in April 1963.

Mohammad Rasoulof‘s There Is No Evil has won the Berlinale’s Golden Bear prize. Here’s an excerpt from Peter Debruge’s 2.28 Variety review:

“In Iran, executions are often carried out by conscripted soldiers, which puts an enormous burden on the shoulders of ordinary citizens. And what are we to make of the condemned, for whom guilt can sometimes be a capricious thing, dictated by a severe and oppressive Islamic regime — the same one that accused Iranian director Mohammad Rasoulof of ‘endangering national security’ and ‘spreading propaganda’ against the government?

“When Rasoulof returned from Cannes in 2017, following the premiere of his film A Man of Integrity, he was banned from filmmaking for life and sentenced to a year in prison. But as a man of integrity himself, the director could not stop.

“His latest film, There Is No Evil, premiered in competition at the Berlin Film Festival, where instead of being silenced, Rasoulof launches his most openly critical statement yet, a series of Kafkaesque moral parables about Iran’s death penalty and its perpetrators, made in open defiance of the restrictions the government put on him.

“The resulting feat of artistic dissidence runs two and a half hours, comprising four discrete chapters, each one designed as a standalone short film exploring a different facet of the subject. By subdividing the project like this, Rasoulof was able to direct the segments without being shut down by authorities — who are more carefully focused on features — and, in the process, he also builds a stronger argument.

“The truth, the film clearly understands, is more complicated than its title: There is evil in the world, and it corrupts us when we don’t take a stand. What would you do in the characters’ shoes? What will you do in your own?”