Bernie Sanders‘ loss to Donald Trump next November will usher in a period of catastrophic bully-boy autocracy that will make the last three years look faint-hearted by comparison. It will also shatter the Democratic party into a thousand shards of shrieking recrimination — people will lose their minds — while accelerating the planet’s fossil-fuel destruction tenfold and God knows what other horrors.

In ’16 blunt-spoken Bernie seemed like a good guy compared to cackling eye-bag Hillary, but now he’s the Pied Piper of Destruction and an all but certain deliverer of…oh, God, more misery than most of us can even imagine. And for the sake of the very best intentions. Over the cliff and into a Jeremy Corbyn-like abyss.

Moderate candidates, remember, won 54% of the Iowa vote compared to Sanders and Elizabeth Warren’s 44%, and in New Hampshire Bernie-Warren tallied 35% compared to 53% for Buttigieg, Klobuchar and Biden. But “Bernie’s probably got it”, the pundits say.

And so tonight’s Las Vegas debate, naturally, will be all about what a terrible billionaire candidate Michael Bloomberg is. A candidate who might have a chance of beating Trump…maybe. Progressive twitter has been tearing Bloomberg down over the last several days, and this evening he’ll be slashed, trashed, hammered, punched, bruised, brutalized and rhetorically spat upon, etc. Partly by Warren but mostly, I presume, by the Death’s Head Moth from Vermont.

I’ve never liked Amy Klobuchar, but I’m almost hoping she catches on. She won’t because too many people feel as I do but I’m hoping against hope. I don’t know what to do or say or feel. We’re dead, finished, kaput. The most corrupt and ethically destructive U.S. president in history is probably going to be re-elected. We’re all in a pit of hell. When Bernie loses next November you can thank guys like Kid Notorious along with the wokester purists. 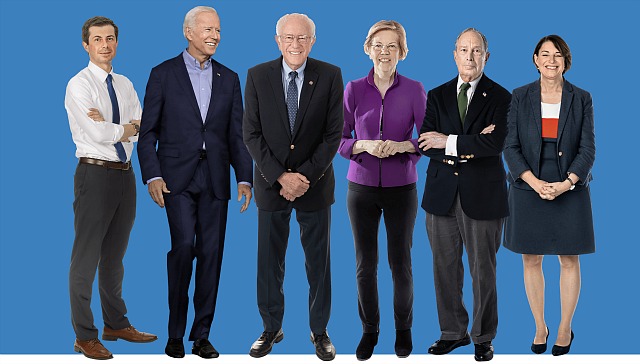