F.X. Feeney was the kindest, warmest, most wonderful human being I’ve ever known in my life. Well, not specifically — the preceding description actually applies to Raymond Shaw in The Manchurian Candidate — but F.X. really was one of the best human beings I’ve ever dealt with in this racket…this kinship of the cloth made up of bicoastal film chasers and acolytes, contrarians, worshippers, cultists, would-be priests, snarkers, chess players, obsessives, rage junkies, hand-jobbers and torch-carriers.

And now he’s gone and my heart goes out. A series of strokes. 66 years old. If anyone hears of a gathering or farewell party of any kind, please advise.

Sharp, perceptive and enterprising though he was, F.X.’s stock-in-trade was the fact that he had a big beating heart that never quit. He didn’t seem to have a caustic or dismissive bone in his body. He might allude to this or that shortcoming in a film or a person, but he never put anyone or anything down. He was mainly about scholarly hugs and caresses. 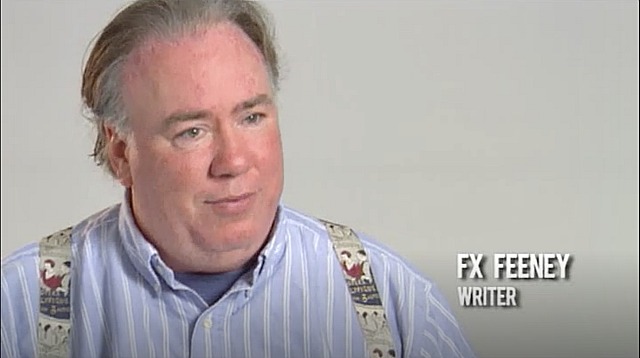 Plus he was a staunchly emotional Irishman, and I can recall two or three times off the top of my head when his voice cracked while speaking of something near and dear. Buy or stream Z Channel: A Magnificent Obsession (which no one, I realize, is allowed to mention these days because founder Jerry Harvey killed his wife and himself in some kind of horrific murder-suicide finale), and watch F.X. reflect tearfully on the Z Channel mystique and Harvey’s contradictory currents.

F.X. prayed at the altar of film on a daily, devotional basis. He cared, he believed. You could wake him up at 4:30 am on a Sunday and talk to him about Michael Powell or Budd Boetticher or Michael Cimino or Roman Polanski. The only other film persons I can think of who’ve routinely augmented their film passions with such kindness and tenderness are Guillermo del Toro and Martin Scorsese.

If he hadn’t become a film guy F.X. couldn’t been a great priest. I can see him right now in a freshly pressed black cassock. To me he was always the Film Yoda with the kindly face and the Andy Devine-sized pot belly, that pinkish complexion and that dapper fedora covering his swept-back salt-and-pepper hair.

Of all the people in the New York and Los Angeles film realm there are maybe four or five I would consider confessing my sins to. Until today F.X. was one of them. I could go into the confessional closet, get on my knees and say, “Bless me, father, for I have sinned against whatever or whomever.” And F.X. would say, “You’re absolved, Jeff. Go and sin no more. And while you’re at it you might want to find a bigger place in your heart for Michael Cimino.”

F.X. and I worked as in-house freelancers for People in ’97 and ’98. It was in the People offices that F.X. passed along a story he’d gotten from Lars von Trier at the 1998 Cannes Film Festival, about an alleged incident between Harvey Keitel and Nicole Kidman during filming of Eyes Wide Shut. (I once referred to it as “The Saga of Mr. White.” **)

A lot of brief tributes have appeared on F.X.s Facebook page.

Wiki boilerplate: “After graduating from the California Institute of the Arts in 1976, Feeney worked for several years as an inker and painter at Hanna-Barbera Studios. By 1980 he became a film and book critic for LA Weekly.

“Jerry Harvey, chief programmer for the pay TV service Z Channel, noticed a tribute to Warren Oates that Feeney wrote after the actor’s sudden death in 1982. Harvey had been the last person to speak to Oates. This led to Feeney serving as a resident film critic and creative consultant to Z Channel between 1983 and 1989, directing dozens of commercials for the service. The ads promoted a number of premieres of director’s cuts and “lost films” that were the trademark of Z Channel, most notably Sergio Leone‘s Once Upon a Time in America, John Ford‘s Up the River, Karel Reisz‘s The Loves of Isadora and Sam Peckinpah‘s Pat Garrett & Billy the Kid.

“After Z Channel folded, Feeney worked alternately as a screenwriter and freelance journalist. His work has continued to appear in L.A. Weekly, as well as in American Film, Movieline, People Magazine, Variety, Vanity Fair and the magazine of the Writers Guild of America, West.

“Feeney published two book-length essays with Taschen in 2006 about film directors Roman Polanski and Michael Mann. In 2006 and 2007, he became a creative consultant to ClickStar, a movie download service founded by Morgan Freeman, constituted on the Z Channel model.”

** Almost certainly bullshit but who knows?: Von Trier said that Keitel and Kidman had been filming some kind of sexually intimate scene, and that Keitel had submitted to the scene with too much passion and had accidentally ejaculated on her, and that the blowback from this had led to Keitel’s departure. The incident was described by Von Trier, according to Feeney, as “an honest misfire.”