Of all the Best Picture contenders this guy only likes Once Upon A Time in Hollywood and JoJo Rabbit, but his real favorite was Danny Boyle‘s Yesterday. Jesus wept! Plus I have no respect for anyone who would call Casino better than The Irishman. That’s just a silly estimation. Everyone regards Casino as good but grating (especially due to Sharon Stone‘s performance) and certainly underwhelming compared to Goodfellas, and not nearly as satisfying as The Departed. But at least he’s entertaining:

“My favorite film of the year didn’t even get a nomination. I’m embarrassed to admit it because a lot of people hated it, but it was Yesterday. That movie made me feel fucking great.

“Two movies that I really hated were Ford v Ferrari and Little Women. The director [of Ford, James Mangold] knows nothing about racing, and admitted as much at the q & a after it screened at the Academy — you don’t have someone putting on their goggles once they’re already driving or staring longingly at the guy in the next car as he passes him! [The 1966 film] Grand Prix had class and style and knew what it was about. 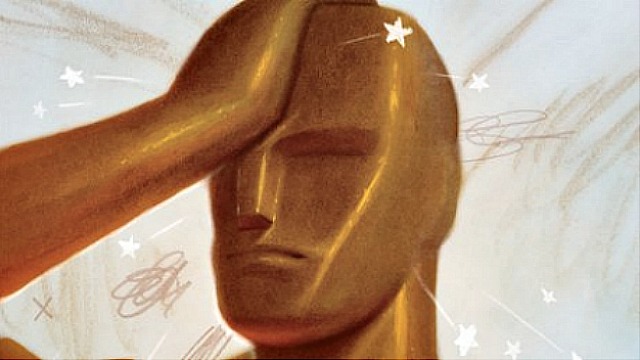 “With Little Women, the timeline was ridiculous. I was really confused sometimes, and I know I’m not the only one. Thank God [Saoirse Ronan] cut her hair, because that at least gave me a bit of a reference point.

“As for Marriage Story, I needed to care for the kid, and I didn’t. And I know that those two actors [Adam Driver and Scarlett Johansson] poured their souls into those roles, but it’s getting harder and harder for me to care about entitled people’s marital relationships. It wouldn’t have been that hard to say, ‘I’ll stay in New York, you go to LA and work for a while,’ stay married, hook up when you can and be bicoastal.” HE interjection: I agree with this criticism.

“The Irishman, as much as I loved it and its performances, is not Casino. After Hoffa was dead, the movie was done for me, my ass was sore and I wanted to get the fuck out of there.” HE to producer: What is wrong with you, man? The last 35 minutes of The Irishman [after Hoffa is dead] is the big melancholy karma-kickback payoff, Frank Sheeran looking at death in the face, buying the coffin, talking to the priest, “leave the door open a little bit,” etc. You, sir, are a half-filled Coke bottle.

“I love Parasite — super-smart, brilliant director [Bong Joon Ho], the movie looks great and the whole look into class struggle was terrific — but once the murdering started happening they lost me.

“Joker was excellent, but it’s not a best picture.

“Once it got down to Jojo Rabbit and Once Upon a Time in Hollywood, it was hard for me. I wish I could have voted for them both. Once I realized it was okay to laugh at Jojo, it was great — so funny and so applicable to where we are today.

“But Once Upon a Time in Hollywood gave me real escape at a time when I wanted nothing more. I don’t jump up and down for [Quentin] Tarantino movies — the last movie of his that I liked before this one was Jackie Brown, but this movie made me feel good. We all have our ups and downs in this business. I’m not at the high point of my career right now, so I could identify very much with the characters, and Once Upon a Time in Hollywood gave me hope.