Has anyone seen Jeff Nichols‘ Midnight Special, which opened a little less than four years ago? Of those who saw it, does anyone remember much about it? You wouldn’t be expected to as it was fairly negligible. (A good 20% if not 30% of the RT positive notices were born of knee-jerk critical deference to Nichols, who’s one of the good guys whom everyone is required to like.) And it was a commercial bust, costing $18 million but earning only $6.7 million.

I called it “a grim, grubby paranoid road-chase thing — a kind of shitkicker film about peeling rubber and hiding out in shitty motels and dodging the authorities, mixed in with doses of Starman, E.T. and Close Encounters. For my money it felt like too much work for too little payoff. When it ended I was muttering to myself, ‘That’s it?’ As I was driving back over the hill I was saying to myself, ‘You can’t hit a homer every time at bat.'”

Until last night I had no reasonable expectation of ever thinking about Midnight Special again. But then, out of the blue, Tomato-approved critic Monica Castillo tweeted that Nichols’ film was “still great.” To which I responded, “Uhm, why would you call it ‘great’? It obviously isn’t.” Castillo replied, “Because I thought it was great. We can agree to disagree on this movie and many others.” What could anyone say to that except “okay, I guess, whatever”?

But within seconds TheWrap‘s Alonso Duralde pounced on me for mansplaining and sounding like an asshat. Not for disagreeing with Castillo’s opinion but for disagreeing with Castillo. Because on Twitter, the gentlemanly thing is to never sharply disagree with a Latina critic, and to in fact treat all gilded-cage critics with kid gloves. Which of course is a form of chivalrous chauvinism and protective paternalism.

If I’d disagreed with, say, Emiliano Castillo of the San Jose Mercury News, Duralde wouldn’t have said boo and he knows it. 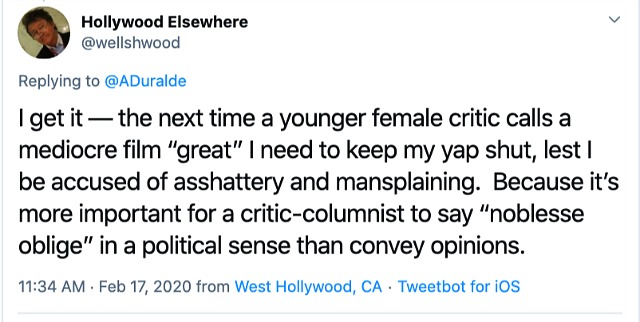 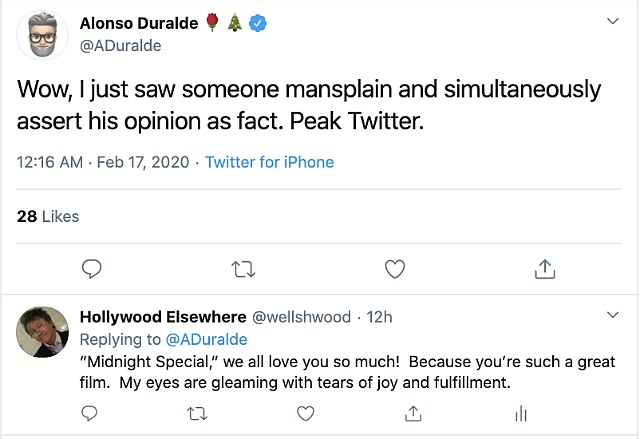