Last night I watched Alexandre O. Philippe‘s Leap of Faith, a 105-minute doc about William Friedkin and the making of The Exorcist. Assembled from a marathon six-day Friedkin interview, the 84 year-old director passes along fascinating story after story about the development, casting, filming and editing of his 1973 classic.

The film premiered at last September’s Venice Film Festival, and it just played at Sundance ’20. I was interested because I was a huge admirer or Philippe’s Memory, a saga of the making of Ridley Scott‘s Alien, which I saw during Sundance ’19.

Leap of Faith (which will probably get some kind of minimal theatrical play before going to streaming) is very good stuff. It held me tight and firm — I relaxed and felt great start to finish. As a longtime Exorcist fan (I’ve seen it 10 or 12 times, the last two or three on Bluray), I eat this shit right up.

Friedkin (known in his heyday as “Hurricane Billy”) is a first-rate raconteur — always has been. He tells it and sells it. And man, what a story. He was between 37 and 38 during the shooting of The Exorcist in ’72 and early ’73, and it was the greatest time in the history of Hollywood to be a hotshot whirlwind helmer. All the signs were favoring. 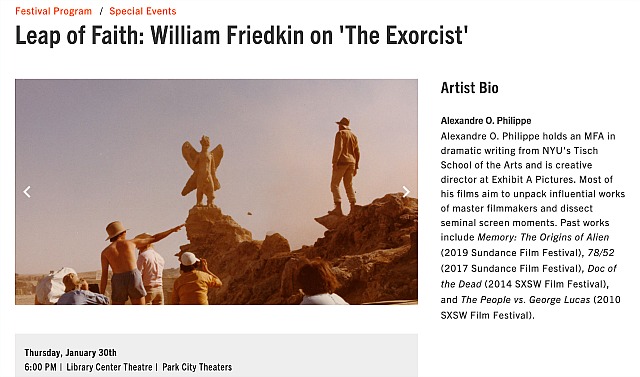 I loved all the stories in which Friedkin told this and that Exorcist collaborator that their ideas or acting weren’t good enough. Saying “no” over and over again to this or that possibility is partly what strong directing is about. There are always hundreds of mediocre or underwhelming ideas thrown at a director, and he/she has a duty to say “no” to roughly 98% of them.

I especially loved Friedkin’s riff on a certain “grace note” portion in the film (the non-essential but haunting passage in which Ellen Burstyn walks through Georgetown on a crisp fall day as “Tubular Bells” plays on the soundtrack). And I was intrigued by Friedkin’s concluding thought, which keys off footage of Kyoto’s gardens, about the essential solitude and loneliness that we all have within.

But since Philippe is encouraging this kind of thing, I was amazed that Friedkin never even mentions, much less explores, the central social metaphor of The Exorcist.

The story is about the young daughter of a famous and wealthy movie actress succumbing to demonic possession — some adjunct of the devil literally occupying and ravaging her body and soul. But in a broader social upheaval sense this kind of thing was happening a lot in the mid to late ’60s. Middle-aged parents of that era were contemplating the anti-traditional, in some cases shocking behavior of their teenage or college-age kids (longer hair, frank sexuality, pot and hallucinogens, anti-government protests) and wondering what had happened to them. Who is this person? What dark social forces have turned my son/daughter into someone I barely recognize, much less feel any rapport with?

William Peter Blatty’s 1971 novel came out of this social earthquake, and anyone who says that late ’60s cultural convulsions weren’t a seminal influence in the creation of this horrific tale is either brain-cell deficient or lying. How could Friedkin not even mention this?

And as long as he’s telling fascinating tales, why not mention the Ted Ashley-Ellen Burstyn story that he passed along in his 2013 book “The Friedkin Connection“?

Excerpt: “Ashley, the senior production chief at Warner Bros., hAted the idea of casting Burstyn. ‘I’m not giving the lead in this picture to a woman who’s never played a lead in anything!’ He was furious. ‘Ellen Burstyn will play this part over my dead body.’ At which point he walked to the side of his desk and lay down, face up, on the floor. ‘Go ahead,’ he said, “try to walk over me.”

“I shrugged, then walked to where he was lying, to step over him. He quickly grabbed my leg and held it tightly so I had to lean on his desk for balance. ‘You see?’ he shouted triumphantly. ‘That’s what’ll happen if you try to cast Burstyn. I’ll come back from the dead to stop you!’ Alas, the studio had no other choices, and eventually Burstyn was approved.”

The only problem with any of this is that serious Exorcist heads have already seen “The Fear of God: The Making of The Exorcist,” a 22 year-old doc that accompanied a 25th anniversary DVD release. And it has a few of the same stories. And there’s another Friedkin doc that also premiered at the 2018 Venice Film Festival — Francesco Zippel‘s Friedkin Uncut, which I’d also love to see. (Here’s Glenn Kenny’s N.Y. Times review.)