The Hollywood Reporter‘s Scott Feinberg and Scott Johnson have co-authored a 2.3 article titled “Catherine Burns: The Vanishing of an Oscar-Nominated Actress.” It tries to paint a hard-luck portrait of a gifted actress whom Hollywood had given the backhand to, and who hated playing the Hollywood game, and who led a subdued and shrouded life over her last three or four decades.

The 23-year-old Burns delivered an Oscar-nominated supporting performance in Frank Perry‘s Last Summer (’69), but she was never that lucky again. Burns made two more films in the immediate wake (Me, Natalie, Red Sky at Morning) and did some theatre and a lot of television over the next…oh, 15 years or so. She had dabbled in writing and allegedly focused on that entirely in the ’80s. Then she fell off the map.

A longtime Manhattanite, Burns married a non-industry dude named Kenneth Shire in 1989. Sometime in the aughts she and Shire moved into a retirement community in Lynden, Washington. The THR piece discovers that the 73-year-old Burns passed almost exactly a year ago and that cirrhosis (i.e., a drinking problem) was a “contributing factor” in her demise. 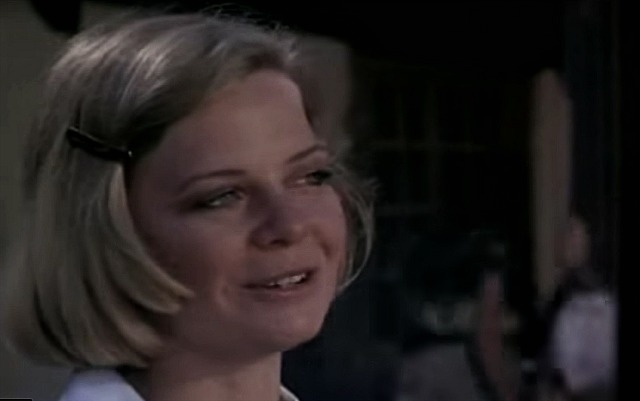 When contacted by the Seattle-based Johnson, Shire doesn’t mention her passing. He also lets go with some anti-Hollywood rancor. “She hated [Last Summer] and most everything that came with it,” Shire says. “She wanted to be remembered as a published writer of novels. My wife has been out of the business for decades. She is not old news. She is ancient news. We are in our eighth decade. We left that rotten business a long time ago. It’s time for some peace. Maybe someone else wants this kind of reminder of who they once were, but we do not.”

HE to Feinberg, Johnson: My impression was that the piece tried to inject a certain melancholy or sadness that may not have been warranted by the facts. It tried to make it sound as if Burns wanted to deepen or expand her career but Hollywood and to a lesser extent Broadway said no. In their usual callous way, Hollywood types didn’t think she had the right look.

Many are called, few are chosen. Talented as she was, Cathy Burns was one of the called.

Just because Burns delivered a special moment in Frank Perry‘s Last Summer as well as some noteworthy stage and TV-series performances…that doesn’t mean she had what it took to keep going and going as an actress, She apparently didn’t have that engine, that hunger, that gotta-gotta. We all know that these qualities are as important as talent.

A certain Hollywood columnist was dismissive of her looks, the article reports, and that obviously amounted to a kind of cruelty.

Burns’ looks were okay. She was small and mousey, but it takes all sorts to make a world. If you ask me she looked like a slightly less attractive version of Liza Minnelli‘s “Pookie” in The Sterile Cuckoo, and perhaps with a side order of Susan Oakes‘ “Anybodys” in West Side Story.

The main thing is that she didn’t have that X-factor dynamism that all successful actors seem to have. She had a certain recessiveness and a face that said “whatever” and “maybe you could leave me alone”. She was was hugely turned off by the day-to-day reality of being famous and recognized on the street or whatever.

In early ’70s Rex Reed said on The Dick Cavett Show that he loved Burns’ performance. He also said a thing or two about supporting players who have a limited palette.

Burns might have had a tough time of it and/or a possible drinking problem, but at least she had that brilliant Last Summer performance, which on the personal and creative fulfillment scale puts her way ahead of God knows how many tens of millions of regular Janes who never broke out of their humdrum middle-class lives, or God knows how many thousands of would-be actresses who were never lucky enough to be cast in a Frank Perry film during a very special time in the late ’60s.

Not every talented person makes it in this business. Some deliver a breakout performance and then the clamor stops. It sounds as if Burns wanted to live a quiet, sheltered, hidden-away life for the most part. Plus she had a semblance of a life in that retirement community during her last decade or so. Mostly, it seems, Burns made her own bed.

Does the piece say that? No. It basically says “poor Cathy Burns…she had a special gift but she got the brush-off because she didn’t fit the Hollywood mold, and so she wound up leading a possibly happy but subdued life, and then she died of cirrhosis, and then her widowed husband tried to pretend she was still alive when the Hollywood Reporter came calling.”