I don’t know what I’d do if I was Jason Bateman‘s character, Marty Byrde. I’d probably spend half my time dreaming about what faraway tropical haven I could escape to, and the other half debating which method of suicide would be preferable. What a churning cauldron of greed and malice, and in a Missouri hellscape yet. Bumblefuck agony. Season 3 will deliver ten episodes, starting on 3.27.20.

I’m very sorry that Rod Lurie‘s The Outpost, which had been scheduled to debut at South by Southwest on 3.14 with a follow-up on 3.17, has taken a COV-19 torpedo along with the whole SXSW ship. Yes, Rod and I are friendly but this is nonetheless a strong, vital and worthy film, and it would have been suitably launched had things gone off as planned. Life is unfair.

Early last November I caught a not-quite-finished version. A U.S. forces-vs.-the-Taliban war flick based on Jake Tapper’s book, it’s a rousing, highly emotional drill into another tough battle that actually happened, and another example of the kind of combat flick to which we’ve all become accustomed — one in which the U.S. forces get their asses kicked and barely survive.

Tapper’s same-titled book, published in 2013, is about the ordeal of U.S. troops defending Combat Outpost Keating. Located at the bottom of a steep canyon and absurdly vulnerable to shooters in the surrounding hills, the outpost was brutally attacked by Taliban forces on 10.3.09. For a while there it was very touch-and-go. The base was nearly overrun. Eight Americans and four Afghans defenders were killed.

The Outpost starts off, naturally enough, with a subdued queasy feeling of “okay, how long before the bad stuff starts?” What happens is that things start to go wrong vaguely, gradually, in small measures. Then it upshifts into unsettling (a name-brand actor buys it) and then bad to worse, and then worse than that. And then the bracing, teeth-rattling 30- to 40-minute finale.

It just occured to me that one of the things I loved about Zero Dark Thirty, which is not about the military but the intelligence community, is that it ends with a feeling of modest satisfaction — bad guy smoked, mission accomplished, all is well.

I know I was expected to feel a similar kind of satisfaction from Clint Eastwood‘s Heartbreak Ridge, but I didn’t.

Variety‘s Steven Gaydos, posted last November: “Thanks for calling attention to this terrific film that packs a wallop. Really an edge of the seat experience from start to finish and deeply moving as well. Very Charge of the Light Brigade in that ‘military intelligence’ once again proves oxymoronic and brave young souls are left to figure a way to save each other from catastrophe. Heroes.”

South by Southwest is the latest festival to fold its tent over fears of COVID-19. The annual film and music festival would have happened between Friday, 3.13 and Saturday, 3.21. How serious is the threat in Texas? Not very. It’s slight, in fact, but all those big companies panicked and bailed. Hollywood Elsewhere will boldly fly to Austin anyway to visit my son Dylan, who recently moved there from the Bay Area.

Following Thursday afternoon’s walkout the Hachette Book Group announced today that it has capitulated to the wokester Khmer Rouge by deciding to not publish Woody Allen’s memoir, “Apropos of Nothing.”

“The decision to cancel Mr. Allen’s book was a difficult one,” senior vp of communications Sophie Cottrell said in a statement. “At HBG we take our relationships with authors very seriously, and do not cancel books lightly. We have published and will continue to publish many challenging books. As publishers, we make sure every day in our work that different voices and conflicting points of views can be heard.

“Also, as a company, we are committed to offering a stimulating, supportive and open work environment for all our staff. Over the past few days, HBG leadership had extensive conversations with our staff and others. After listening, we came to the conclusion that moving forward with publication would not be feasible for HBG.”

Translation: “At HBG we obviously don’t take our relationships with authors all that seriously or we wouldn’t have deep-sixed Woody Allen‘s book. The bottom line is that we are open to cancelling books if the Khmer Rouge doesn’t approve of their content. We are living through a period of wokester blacklisting and career cancellings, and we feel it is better to try to get along with these totalitarian goons than to butt heads.”

Allen obviously needs to simply self-publish. It would almost certainly become a best-seller. 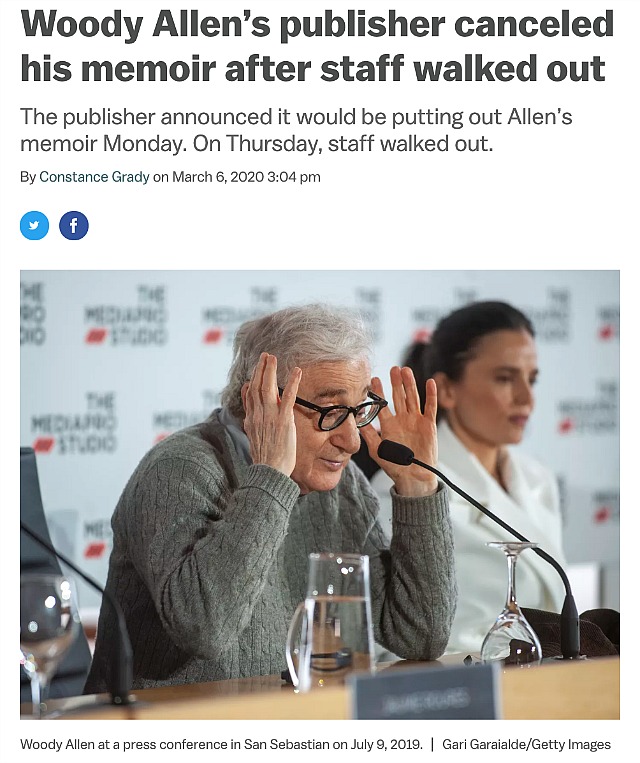 Amid a torrent of laments about how Elizabeth Warren was defeated by sexism (which was certainly a factor in her campaign’s collapse), here’s a candid, splash-of-cold-water-in-the-face assessment by reason.com’s Katie Herzog:

Excerpt #1: “Warren could have focused on the working class; instead, she focused on the wokest class. She advocated for social positions that may resonate with highly educated, largely white activists, but just don’t appeal to a broad base of Americans across race and class. She talked about nonbinary driver’s licenses and advocated for trans women to play women’s sports and used the term ‘traffic violence‘ when the rest of us simply say ‘car crash.’

“She’s out of touch — or at least, her advisers are — and there aren’t enough Oberlin grads for her to win Ohio, much less the swing states that will likely determine the outcome of the 2020 race. So here’s why I didn’t vote for Elizabeth Warren: Because she would have given us four more years of Trump. That isn’t sexism; it’s math.”

Excerpt #2: “Warren’s followers are both primed to see sexism everywhere and so enamored with their candidate — so sure of her (and their own) righteousness — that they are unable to see any of the flaws that are so apparent to anyone outside their bubble.”

“So here’s an alternate explanation: Elizabeth Warren didn’t lose this race simply because of sexism but because she made a series of political miscalculations, starting with the disastrous unveiling of her DNA test, which managed to anger progressives and make conservatives point and laugh. Then there was her refusal to go on the most popular cable news network in America in order to make a political point, the condescending manner in which she spoke about voters she disagreed with, her bungled Medicare for All plan, and the fact that she positioned herself to split the progressive vote with Bernie Sanders — a candidate with grassroots momentum and a campaign that has been ongoing since 2015.

“Had Warren pitched herself as a capable, qualified, less ancient and more moderate Democrat instead of Bernie Lite, it’s possible it would be her running against him right now instead of Joe Biden.

Excerpt #4: “But then she pivoted from the reformer who went after banks and stood up for the consumer into the sort of social media justice warrior who thinks she speaks for marginalized people while actually speaking over them. Despite this ill-advised rebranding, she still had plenty of ideas that I liked, from universal preschool to boosting small business to ending for-profit prisons and getting rid of the Electoral College. But her good ideas were too easily overshadowed by her bad ones.

“Take, for instance, the LGBTQ town hall (which was a bad idea in the first place). Warren was asked by a 9-year-old trans boy named Jacob what she, as president, would do to keep kids like him safe. Instead of telling him the truth (‘Jacob, bullying is sort of a local issue but I recommend a kickboxing class’), she said that she would let this 9-year-old kid vet the next secretary of education. This may have played well in that room, but she wasn’t running to be the president of the Gay-Straight Alliance; she was running to be president of the United States.”