Stephens: “Allen’s book alleges that Mia Farrow not only brainwashed Dylan [Farrow] into believing she had been molested but also that she victimized some of her adopted children physically and psychologically, claims Moses Farrow and Soon-Yi fully corroborate. 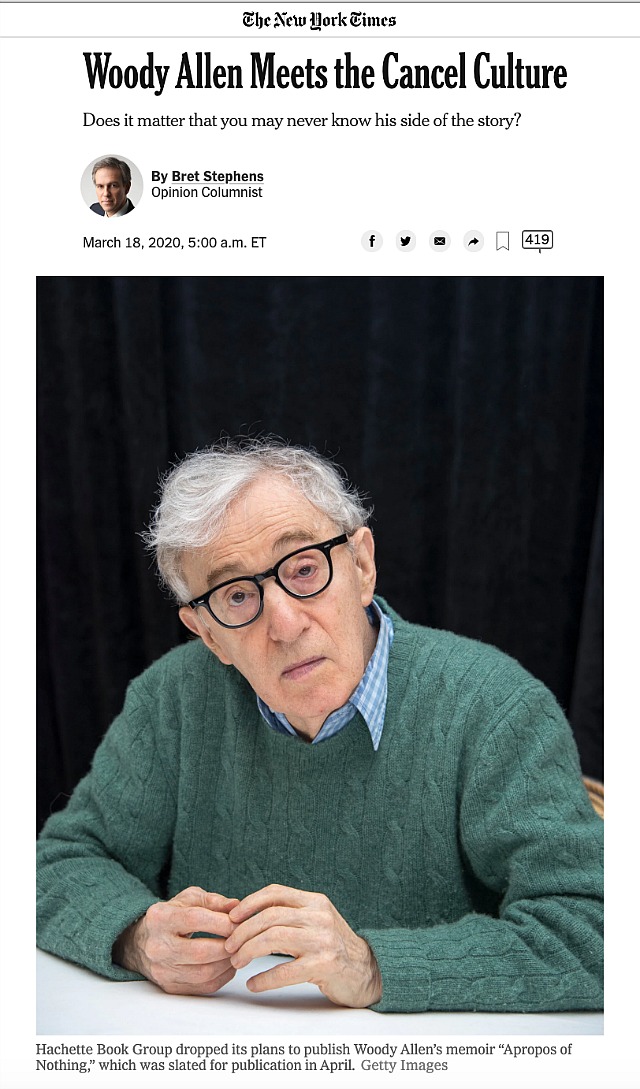 “In one instance, according to Moses, Mia once locked up her adopted paraplegic son Thaddeus in ‘an outdoor shed overnight over a minor transgression.’

“If Mia, Dylan or Ronan Farrow were to write a book rebutting Allen’s charges — only for the publisher to buy the book and then quash it at the last minute — there would surely be an outcry. Rightly so.

“So why does any of this matter in this virus-bitten moment?

“The answer isn’t censorship: Hachette is a business that must take account of its market, while Allen is still free to shop his book to another publisher. Nor is the answer that the memoir is some priceless literary treasure that must see the light of day. Much as I enjoyed it, it isn’t.

“It matters because cancel culture threatens our collective well-being in multiple and fundamental ways: The banishment of unpopular people; the unwillingness to examine contrary threads of evidence and entertain opposing points of view; the automatic conflation of accusation with guilt; the failure of nerve by people entrusted with preserving the institutions of liberal culture; the growing power of digital mobs; the fear these mobs instill in any would-be contrarian or gadfly who thinks to venture a heterodox view. These threats go to the heart of what it means to sustain the habits of a free society.”