“Last night was obviously not a good night for our campaign, from a delegate point of view. We lost in the biggest state up for grabs yesterday, the state of Michigan. We lost in Mississippi, Missouri and Idaho. On the other hand we won in North Dakota and we lead in the latest vote count in the state of Washington — the second largest state contested yesterday.

“We are, however, winning the generational debate, and I say to the Democratic establishment that in order to win in the future, you need to win the voters who represent the future of our country, and you must speak to the issues [that] concern them. You cannot simply be satisfied from winning the votes of people who are older. 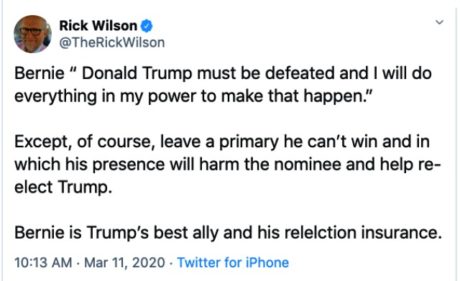 “While our campaign has won the ideological debate, we are losing the debate over electability. I cannot tell you how many people our campaign has spoken to, who have said and I quote, ‘I like what your campaign stands for, and I agree with that also, but I’m gonna vote for Joe Biden, because I think he’s the best candidate to defeat Donald Trump.

“Tragically we have a President today who is a pathological liar, and who is running a corrupt administration. He clearly does not understand the Constitution of the United States and think that he is a President who is above the law. In my view he is a racist, a sexist, a homophobe, a xenophobe and a religious bigot. He must be defeated [next November] and I will do everything in my power to make that happen.”