An apparition standing in grassy weeds on the other side of a river. No words, movement, gestures. Like a mannequin, and in bright sunlight yet. And then she’s gone.

All my life I’ve felt vaguely creeped out by this scene in Jack Clayton‘s The Innocents (’61). Alas, your typical horror fan wouldn’t so much as raise an eyebrow if a director had the nerve (or the foolishness) to insert something like this in a contemporary fright flick.

“Quietly unnerving” lost its currency a long time ago, I’m afraid. I’m not sure it ever had any real currency to begin with. Today’s elevated horror genre (Personal Shopper, Hereditary, A Quiet Place, The Babadook) demands bigger jolts. The only recent films that operated close to this level were Robert Eggers‘ The Lighthouse and The Witch, and even they dealt crazier cards than Clayton did.

The woman in the weeds (i.e., “Miss Jessel”) was played by Clytie Jessop.

There’s also a moment or two with Quint at the window. He was portrayed by Peter Wyngarde, who died two years ago. 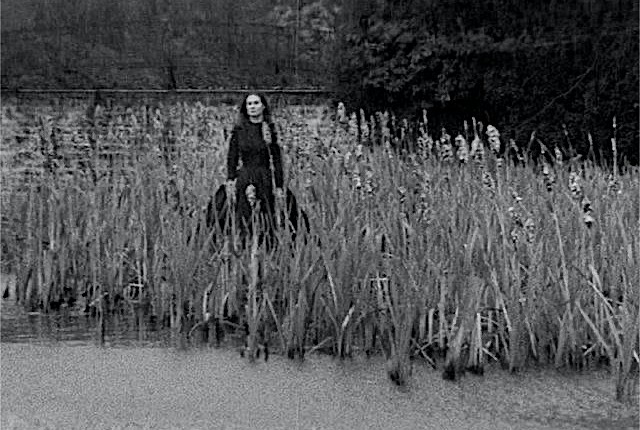