In the space of 24 hours I went from never having seen Anthony Mann‘s Raw Deal, to begrudgingly watching a shitty 480p version on Amazon Prime, to half-admiring it, and then realizing it was actually better than that, and then deciding that owning the Classicflix Bluray wouldn’t be a bad idea.

Especially considering the following extras: (a) a feature-length audio commentary by author and film historian Jeremy Arnold, (b) “Deadly is the Male: The Making of Raw Deal” — a featurette with writer and film historian Julie Kirgo, film historian and director Courtney Joyner and biographer and producer Alan K. Rode; (c) “Dennis O’Keefe: An Extraordinary Ordinary Guy,” a featurette with Jim O’Keefe (son of Dennis O’Keefe) and biographer and producer Alan K. Rode & film historian & director Courtney Joyner; (d) A 24-page booklet with an essay by author Max Alvarez (“The Crime Films of Anthony Mann”) featuring stills, posters and other production material; and (e) a restoration comparison. 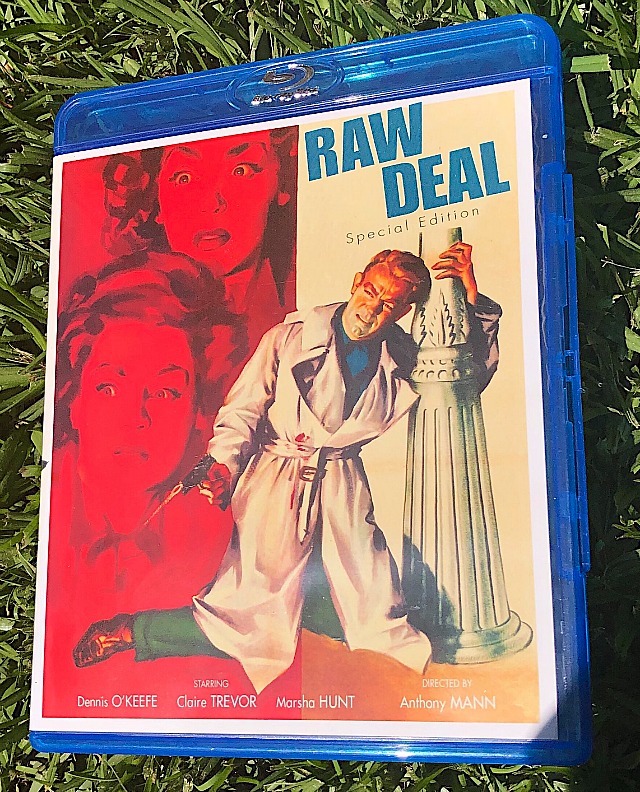 And by the way, costar Marsha Hunt is still with us at age 102 — “retired actress, model, and activist, with a career spanning over 70 years — blacklisted by Hollywood film studio executives in the 1950s during McCarthyism. In the midst of the blacklist era, Hunt became active in the humanitarian cause of world hunger, and in her later years she has aided homeless shelters, supported same-sex marriage, raised awareness of climate change and promoted peace in Third World countries.”