Earlier today, the Academy’s board of governors approved a temporary relaxation of the rule stipulating that a film needs a seven-day theatrical run in L.A. County to qualify for the Oscars. This is transitional but whoa-level historic. For the first time in Hollywood history films that have never seen the light of a projector lamp will be able to scoop up an Oscar or two at the Kodak theatre.

The reason, of course, is the awful, soul-stifling, lifeforce-draining pandemic.

Exhibitors were already on life support and gasping for air due to theatre closings — now they’re having sequential heart attacks. They know that in the affairs of all institutions “temporary” often means “mostly temporary unless, you know, things change or whatever.” The operative phrase is “the thin end of the wedge.”

Variety: “[This] doesn’t mean, however, that any movie premiering on a streaming service is eligible for Oscar gold. To be considered, the streamed film must have already had a planned theatrical release. The film must also be made available on the Academy Screening Room member-only streaming site within 60 days of the film’s streaming or VOD release”

AMPAS president David Rubin and CEO Dawn Hudson, in a letter sent to Academy members: “The Academy firmly believes there is no greater way to experience the magic of movies than to see them in a theater. Our commitment to that is unchanged and unwavering. Nonetheless, the historically tragic COVID-19 pandemic necessitates this temporary exception to our awards eligibility rules. The Academy supports our members and colleagues during this time of uncertainty. We recognize the importance of their work being seen and also celebrated, especially now, when audiences appreciate movies more than ever.” 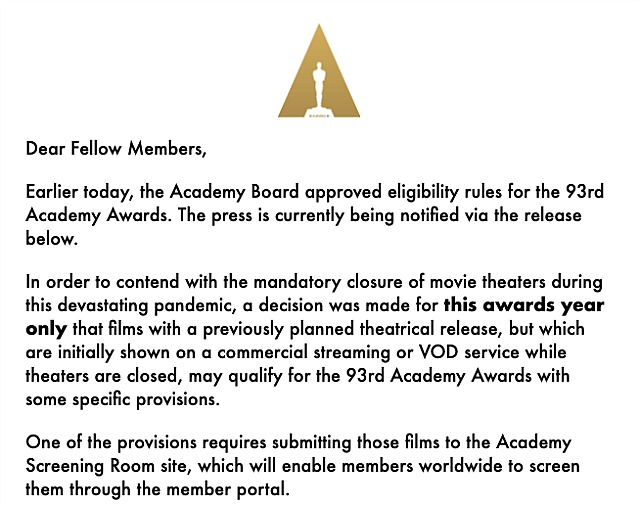 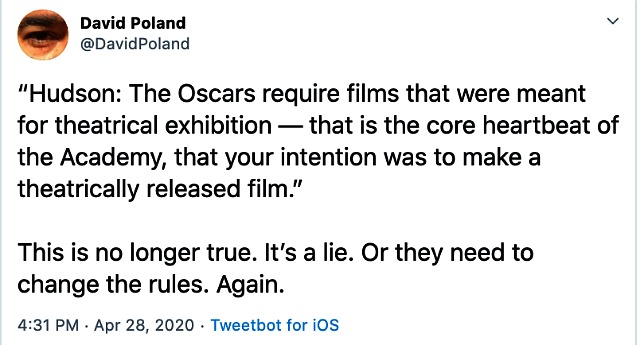