In a just-posted Indiewire piece about the upcoming 2020 and ’21 Oscar season, Anne Thompson quotes a prominent awards strategist as follows: “To cancel Oscars is to kill cinema…it’s the death knell.”

I for one agree, but when I think of “Oscars” I mostly think of the six-month-long, September-to-February season in which films of a somewhat higher calibre get a lot of attention. One way or another “the season” has to happen, and it has to kick off in September or at least October, come hell or high water.

Thompson also speculates that a New York and Los Angeles-based Telluride Film Festival is more likely than the usual usual. “Virtual participation is far more likely — and if fewer talent attends, and media follows, how eager will studios be to program their films? Most likely, distributors will wind up screening movies curated by the tastemakers at Telluride for media in L.A. and N.Y. under safer conditions in rooms sparsely filled by media and awards voters. ‘Telluride films will be ones you pay attention to,’ said one awards campaigner.”

Vulture‘s Mark Harris has written a pissy, dismissive, incurious review of Woody Allen‘s “Apropos of Nothing.” He’s certainly entitled to his opinion, but reading the piece gave me stomach acid. Whereas I felt no adverse stomach sensations and experienced mostly pleasure while reading Allen’s book, especially the portion that covers his Brooklyn childhood and teen years.

Seriously — the first 80 or 90 pages of “Apropos of Nothing” are luscious. They’ll put a smile on your face. And Harris more or less pisses on them, in part because Allen delivers the same kind of riff that he used in Broadway Danny Rose, when Allen’s titular character describes a certain female cousin looking “like something you’d find in a live bait store.” Tribal self-loathing, par for the course, etc.

As I wrote on 3.29, Allen has a voice and a style and a certain shticky attitude, and much of the book is like listening to some streetcorner wise guy tell a story from a bar stool. And I’m sorry but unless you’re an Inspector Javert for the #MeToo community, “Apropos of Nothing” is an engaging read. Really. It’s easy to process. It flows right along. And it’s funny and cuts right through for the most part.

Most of Harris’s review makes a case that “Apropos of Nothing” isn’t the deepest or the most probing piece of literary self-excavation or self-examination ever published, which is true. But I weathered the mundane or underwhelming or overly glib parts. Harris, on the other hand, doesn’t like the fact that Allen is who he is, and that his voice is his voice.

“If you can read “Apropos of Nothing” with that in mind, “you’ll have a better-than-decent time with it,” I wrote. “And by that I mean diverting, chuckly, passable, fascinating, occasionally hilarious and nutritional as far as it goes.”

There are two portions of Harris’s review that made me fall over backwards in my chair.

“I understand those moviegoers who have no desire ever to watch or rewatch another Woody Allen movie,” Harris writes.

He does? One of our finest film historians and a highly perceptive film critic “understands” the nonsensical position of Woody haters, which is based on nothing but a blind belief that Dylan Farrow‘s account of what may or may not have happened on 8.4.92 is 100% reliable? There is nothing in terms of evidence or professional opinion (not to mention the account posted by Moses Farrow) that backs up Dylan’s account, but Harris nonetheless “understands” (seems to have no major argument with, feels a certain allegiance with) their ignorance. Shafts of light piercing through the clouds!

“But as a film historian, I can’t remove [Allen’s] films from my cultural vista,” Harris adds, “because they’re not only his. [For] Annie Hall is also an essential part of Diane Keaton’s filmography, and of Gordon Willis’s, and of Colleen Dewhurst’s, and of Jewish filmmaking, and of New York romantic comedy.”

In other words, if it weren’t for the charms of Annie Hall plus the creative participations of Keaton, Willis and Dewhurst, Harris might be tempted to remove Allen’s films from his “cultural vista”? I’m not going to bellow like a buffalo and slap my forehead as I list all the great and near-great films Allen has directed and written and acted in. But I will say this: I’m stunned.

Harris excerpt: “Dwight Garner, who artfully tweezed this book for the New York Times, wrote that he believes that ‘the less you’ve read about this case, the easier it is to render judgment on it.’ I have little to add to that except how deeply I wish I had read less.”

Harris seems to be saying that he hasn’t read Moses Farrow’s history of what happened between Woody, Mia and Dylan. If he has he certainly hasn’t mentioned this in the review. If he hasn’t read the essay, Harris should know that most of the details and accusations against Mia in Woody’s book are backed up by Moses, who by the way is a professional marriage and family therapist.

There’s a passage in Allen’s book that “stopped me in my tracks”, Harris writes. It says that “[Mia] didn’t like raising the kids and didn’t really look after them. It is no wonder that two adopted children would be suicides. A third would contemplate it, and one lovely daughter who struggled with being HIV-positive into her thirties was left by Mia to die alone of AIDS in a hospital on Christmas morning.”

But if memory serves this is all in Moses’ essay. Is Harris implying that Moses’ perspective and viewpoint aren’t worth considering? If he’s not implying this, why the hell didn’t he at least mention that Moses and Woody are on the same page?

Repeating: Expressing disgust at a candid, well-written (if occasionally redundant and overly gracious in terms of costars and collaborators) memoir by one of the most acclaimed film artists of our time, and in so doing signaling lockstep solidarity with #MeToo cancelling, is not a becoming profile, to put it mildly.

This pissed-off guy seems above-average intelligent. One measure of a fast and nimble brain is the ability to be lucid and persuasive while you’re yelling so hard and loud that your face is turning red. I would love to see him go up against Trump or Fauci or Mitch McConnell or any significant D.C. legislator.

The brilliant Shirley Knight has passed at age 83. A baby buster from Oklahoma, Knight’s acting career spanned nearly 60 years (’59 to 2018). She peaked between ’60 and the late ’70s, but never slowed down. Her last film, Periphery, was released two years ago.

Knight’s performance as the escaped housewife in Francis Coppola‘s The Rain People (’69) is probably her strongest career highlight, followed by her Oscar-nominated turns in Dark At The Top Of The Stairs (which I’m ashamed to admit I’ve never seen) and Sweet Bird of Youth (’62).

Her relatively small supporting role in Richard Lester‘s Juggernaut (as a cruise-line passenger who has a fly-by-night affair with the ship’s captain, played by Omar Sharif) wasn’t any kind of career milestone, but her performance was first-rate. Her best moment was when she danced with Roy Kinnear.

More recently I was impressed by her mother-of-Helen Hunt performance in As Good As It Gets (’97), which was eccentric, spirited and funny.

I never saw Knight’s Tony-nominated performance in Kennedy’s Children (’76), and I don’t even remember her in Endless Love, Divine Secrets of the Ya-Ya Sisterhood or Grandma’s Boy…sorry. And I never saw her in Redwood Highway, a 2013 indie in which she costarred with Tom Skerritt.

I spoke to Knight at a party about four or five years ago. I told her I wished I could re-view The Lie, a 1973 live-TV drama that was written by Ingmar Bergman and dealt with a stale upper-middle-class marriage. It was captured live and on videotape at the CBS Television Center on Beverly and Fairfax. Knight played George Segal‘s wife who was having an affair with Robert Culp, or maybe the other way around. (The fact that it included a discreet semi-nude scene was striking for television back then.) Knight said she’d never seen it, and didn’t know if it had been offered for rent or sale or anything. Apparently a cruddy-looking MUBI version was viewable not long ago.

Kudos to Frontline‘s Miles O’Brien, Kate McMahon and Caleb Hellerman for a gripping, comprehensive summary of how the U.S. became the country with the worst known coronavirus outbreak in the world, or basically how the Trump administration totally dropped the ball and fucked everything up. Or, in dryer, more polite terms, “what happens when politics and science collide.” Worth watching even if you’ve been paying attention. The Open Up bumblefucks probably don’t want to know, but that’s how they roll.

All flooding through me again, can’t unwatch this, apologies, etc.

45 Comments
The New World War 2
For me, Arthur Chu and Joseph McBride have captured the essence of what’s been happening over the last seven weeks or so. We’ve all been suddenly thrown into a fairly close equivalent of World War 2, and some people (the rural, red-state, Trump-following brainiacs who are willing to risk a worsening pandemic in the name of re-opening bowling alleys, tattoo parlors and the like) are revealing who they really are, God help us. 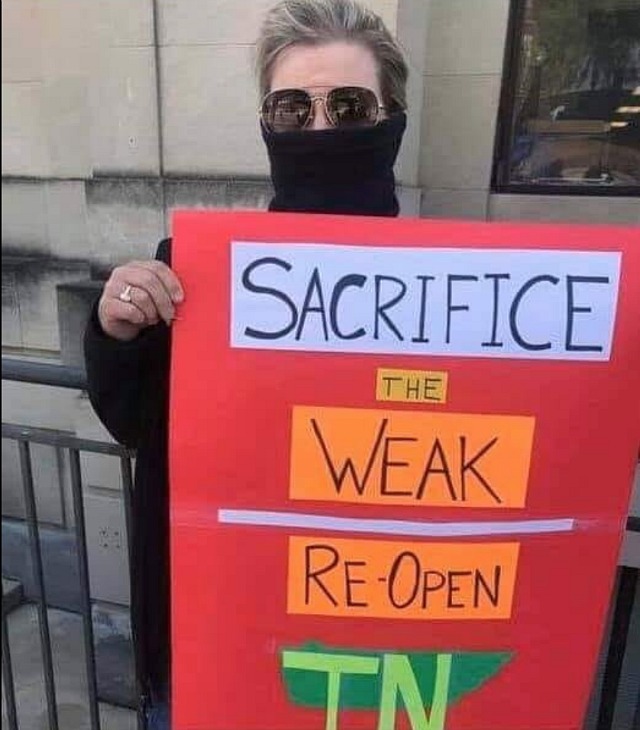