“A Gesture Toward Life”

For years I moaned about not being able to buy a DVD of Carol Reed‘s Outcast of the Islands (1951). Then came a DVD version that didn’t look so hot. Now we have a “a refreshingly new” Kino Lorber Bluray (4.28) that has “depth, superior detail” and a “more layered contrast,” according to DVD Beaver.

I saw Outcast on broadcast TV so many years ago that I can’t remember much, but I have a recollection of something exceptional. If nothing else a serving of atmospheric exotica, it’s about a ne’er do well (Trevor Howard‘s Peter Willems) who doesn’t redeem himself and in fact ends up in a worse place at the end than at the beginning.

The sequence that stands out, memory-fragment-wise, is one in which Robert Morley‘s character (i.e., Elmer Almayer) has been forcibly wrapped into a kind of cocoon-like hammock, and is swinging back and forth with Howard taunting him with a stick or spear of some kind, promising that “I’ll get you next time.” 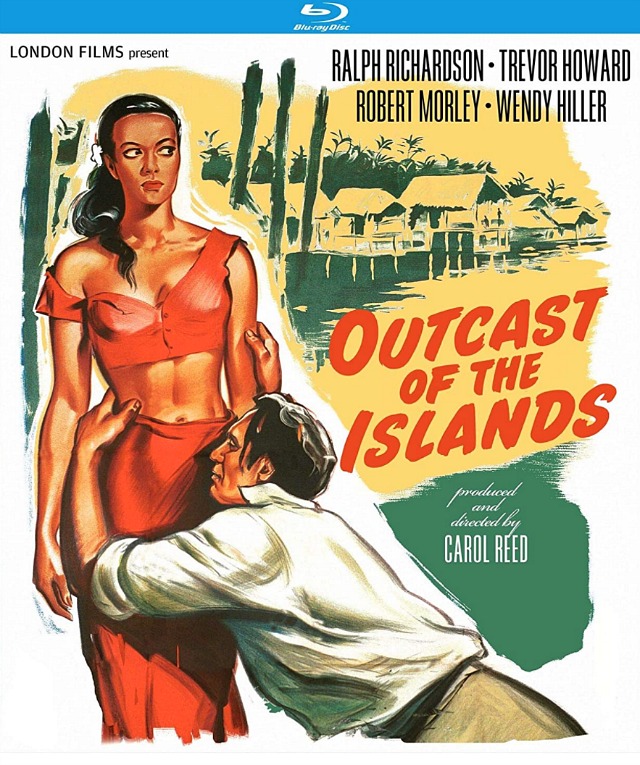 The story mostly takes place in Indonesia. I don’t remember the particulars. I’ve never read the Conrad book, but I gather it’s a bit grim. Wendy Hiller costars with Morley and Ralph Richardson,. The striking black-and-white cinematography is by Ted Scaife and John Wilcox.

Pauline Kael called Outcast of the Islands “a marvellous film that relatively few people have seen. It’s probably the only movie that has ever attempted to deal in a complex way with the subject of the civilized man’s ambivalence about the savage. It also contains some of the most remarkable sequences ever filmed by Reed; it’s an uneven movie, but with splendid moments throughout.

“Howard is superb as Willems, who makes himself an outcast first through contemptible irresponsibility and through betrayal of those who trust him, and finally and hopelessly when, against his will, he is attracted to the silent, primitive girl, the terrifying Aissa (played by Kerima). Willems is wrong in almost everything he does, but he represents a gesture toward life; his enemy, Almayer (Robert Morley), is so horribly, pathetically stuffy that his family unit (with Wendy Hiller as his wife and Annabel Morley as his child) is absurdly, painfully funny.