Bernie Is Out (But Pushes On)

With Bernie Sanders finally acknowledging what has been patently obvious since Super Tuesday, which was that he had no chance to win the Democratic nomination, “just under 20%” of the Democratic base (including the deeply despised Berniebros) is now free to do whatever. Some will bitterly or half-heartedly vote for Biden in the fall, some will become Trump supporters, some will attempt to spark a third-party movement.

For a very brief period, just after New Hampshire and Nevada and prior to Super Tuesday, victory for the Sanders campaign seemed inevitable. But that phase quickly ended when the Democratic establishment strongly urged (i.e., ordered) Pete Buttigieg and Amy Klobuchar to suspend their campaigns. And then Elizabeth Warren bailed in early March.

All along Sanders’ vision and platform have always been the most correct and courageous, but he never had the numbers to defeat Trump.

The passion of the Sanders flock has always been two-pronged — mostly defeating the Democratic center-left establishment and secondarily (and a distant second at that) evicting Donald Trump from the White House. They’re now free to pour all kinds of insurrectionist bile into the social gumbo. For the next few months they will take shot after shot at decent, well-meaning Uncle Joe, who will only serve a single term (everyone understands this) while paving the way for Gavin Newsom or Andrew Cuomo in ’24.

From “Bernie Sanders Only Has Eyes for One Wing of the Democratic Party,” a 4.8.20 N.Y. Times piece by Thomas B. Edsall:

“Earlier this month, Shom Mazumder, a political scientist at Harvard, published a study, ‘Why The Progressive Left Fits So Uncomfortably Within The Democratic Party,’ that analyzed data from a 2019 survey of 2,900 likely Democratic primary voters.

“‘I saw two clear poles emerge within the Democratic Party,’ he writes. “The ‘establishment’ and the ‘progressive left.’ A third group also emerged, and while it’s not as clearly defined as the other two, it has some overlap with the establishment and tends to be more fond of Wall Street, so I’m calling that ‘neoliberals.’

“’Establishment’ voters, in this scheme, means center-left voters who make up just over 60 percent of the total. They stood out as favorably inclined to Nancy Pelosi, Chuck Schumer, Barack Obama and the Democratic National Committee — in other words, to the Democratic establishment.

“’Progressive left’ Democrats, at just under 20 percent, were most favorable to labor unions, Black Lives Matter, the #MeToo movement, Alexandria Ocasio-Cortez and the Democratic Socialists of America. These Democrats viewed business interests — as exemplified by Wall Street — negatively, and they weren’t happy about Joe Manchin, the centrist senator from West Virginia, either.”

Received four or five days ago: 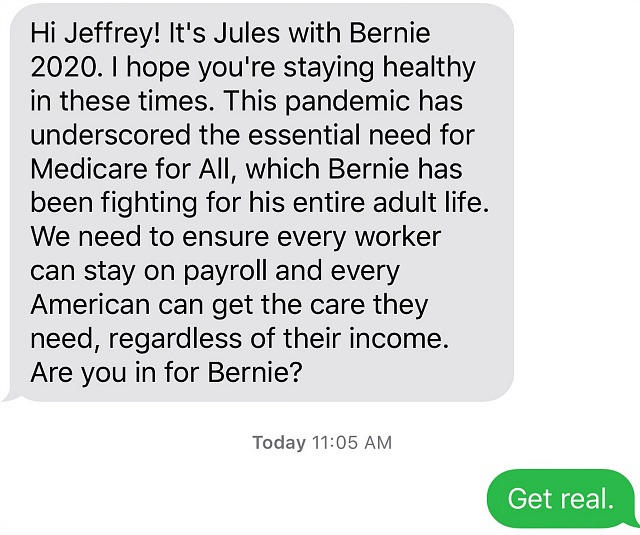 April 8, 2020by Jeffrey Wells62 Comments
« Previous post
Sometime in late May or June…?
Next post »
Respect for Allen Garfield