I intended to watch the first three episodes of Mrs. America on 4.15, when they began streaming. So what happened? I’ll tell you what happened. Last Wednesday arrived and I didn’t get around to it. I kinda sorta forgot, to be honest. Plus I painted the hallway between the living room and the bedroom, above and beyond my column duties. Ditto Thursday and Friday. A three hour commitment isn’t a simple or easy thing. But today I will hunker down.

From Linda Holmes’ NPR review (4.15): “Mrs. America doesn’t ask you to sympathize with Phyllis Schlafly, exactly; it is unsparing in drawing her as a tremendously unkind and destructive person — and, increasingly as it goes on, a dishonest one. But it does seek to explain something about her. It seeks to use the story of her as a way to explain how power works and how politics works, as well as how the ERA came to fail after looking like it was on a clear path to ratification.

“But perhaps we are past needing all of this explained. Perhaps that is why the story of Schlafly feels wearying.

“To be clear, Mrs. America is made well (directing editing, acting). There are some playful and clever juxtapositions in the editing, as when you jump from a very sexy scene to one in which Schlafly is dutifully rubbing her husband’s tired calves. The re-creation of the aesthetic of the period is gorgeous and feels truthful, looking like the 1970s rather than a send-up of the 1970s. Across nine episodes, it never feels dull, even though it does sometimes feel a bit speechy. It doesn’t give in to too many of those moments in historical pieces in which names are dropped in a wink-wink kind of way, as when Schlafly meets two young men late in the series who seem unimportant and then introduce themselves as Roger Stone and Paul Manafort. Or when a young woman helping with the legal work is told, at the close of her one significant scene that perhaps she should assume a higher-profile role — and then she is addressed as ‘Mrs. Ginsburg.’ Winkety-wink.

“But something seems amiss, separate from the filmmaking, separate from the artistry. Maybe it’s just that it can be hard to separate Mrs. America‘s utter bleakness from its quality. Its conviction that determined public figures can persuade people to turn on their neighbors in response to invented threats is hard to argue with, but hardly a proposition for which one needs to turn to fiction — even historical fiction. As the old Palmolive ad of this era would have said: we’re soaking in it.” 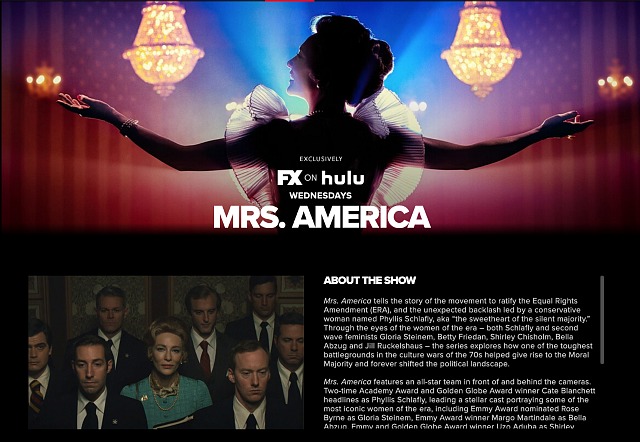