Sunday, 2.9.20 feels like a century ago. Nine weeks have actually passed. Imagine yourself at the Neon/Parasite Oscar-viewing party at Soho House. You’ve been there six and a half hours, Bong Joon-ho has won four Oscars (Best Picture, Best Int’l Feature, Best Director, Best Original Screenplay) and the whole party is whoo-whooing and sipping the champagne. You’re thinking BJH probably won’t show until after midnight or even 1 or 2 am, and that hanging around for another three or four hours isn’t worth the exhaustion.

So you say goodnight to some friends and walk down the staircase and step into the elevator. You arrive at the ground-level parking lot floor and suddenly a younger, tuxedo-wearing guy you kind of “know” but whose name escapes smiles and shakes your hand and says “got a minute?” He pulls you over to an empty corner in the parking area. You’re half intrigued. His right hand is resting protectively on your left shoulder as he leans forward and begins to half-whisper the following:

Tuxedo Guy: “This is going to sound weird and maybe even mind-numbing but what I’m about to tell you is God’s honest truth. I can’t tell you how I know but I do. I’m not bullshitting and I wish I was…”
HE: “Okay.”
Tuxedo Guy: (Exhales) “There’s no easy way to say this but in a few weeks’ time your life will all but totally stop. All of us, everyone, the whole thing. Europe, Asia, everywhere. You’ll continue with the column but everything else will stop. No more incomes, no more travelling, no more restaurants, no more socializing, no more screenings or film festivals, no more wandering around Amoeba Records, no more Aero theatre, no more hiking or beach-walking…it’s all going to screech to a halt.”
HE: “That’s the punchline?”
Tuxedo Guy: “It’s real, man.”
HE: “You heard this today?”
Tuxedo Guy: “I know. Believe me. I’m telling you the truth.”
HE: “Caused by what? A nuclear attack?”
Tuxedo Guy: “No bombs, no terror, not a sound. When it happens you’ll be able to hear a pin drop.”
HE: “When what happens?” 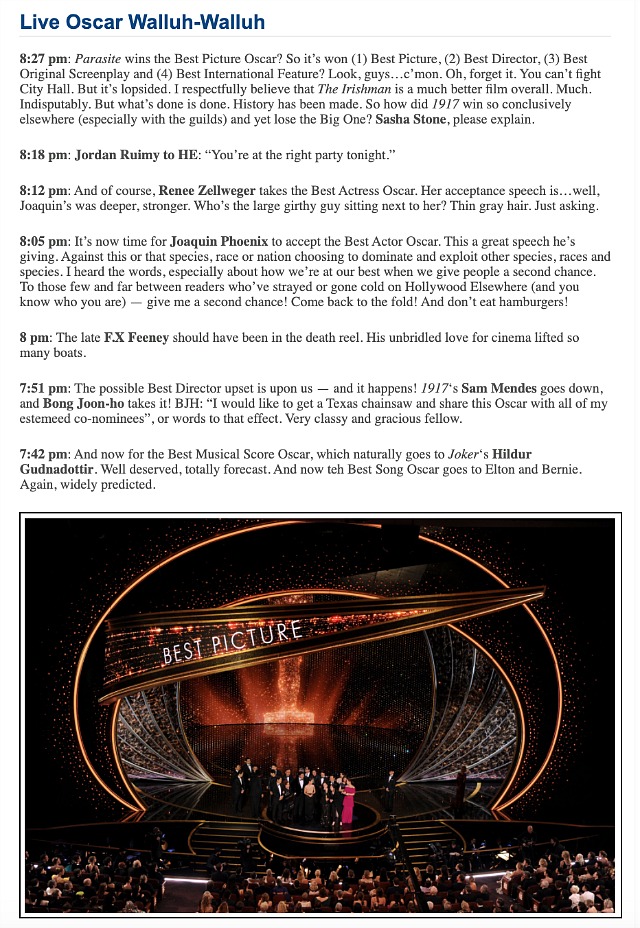