Journo pally: “I recently watched Peter Bogdanovich‘s Saint Jack (’79), which is basically about the most likable and charismatic pimp in Singapore (Ben Gazzara). I know this is not considered one of Bogdanovich’s great successes but several key critics went for it at the time. It’s agreeable in a weird sort of way. The location work is great and Gazzara is fine (ditto costar Denholm Elliott), but all I could think as I watched was “talk about a film that could never, ever be made today…it would be accused of sexism, racism, a white colonial mentality…you name it. The fact that it speaks to its time — the end of the Vietnam War — would be ignored, as would its breezy storytelling. What can I say? Enjoyable but boy, is it anachronistic.”

As it’s free on Amazon Prime, I’ve decided to re-watch Saint Jack and see what happens. 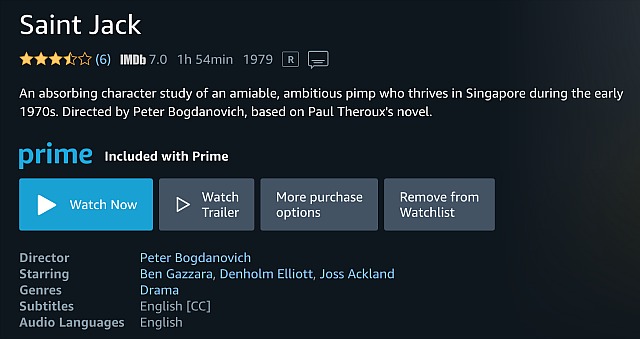