Which Fall Film Festivals, If Any?

Blackfilm‘s Wilson Morales called yesterday to see how I’m doing, etc. Hanging in there, glad to be healthy and doing my best, I said. That includes doing my best to not feel morose, I qualified. Wilson said I need to stop writing so much about the virus. I’m trying like hell to write about anything movie-ish that pops into my head, I said, but I don’t see how I can avoid the spiritual equivalent of the 1930s Dust Bowl right outside my door. It’s like the Martians have landed.

Write about Quibi, he said. The short-form video platform launches tomorrow (4.6) and PMK is sending out loads of screeners, etc. “Good idea,” I said, although inwardly I was tailspinning into depression. I mean, I didn’t get into racket to write about ten-minute shorts.

Wilson also had some strategic marketing advice, which was to work the big streamers (Quibi included) for ads until award season kicks in. They all have to do something to excite the locked-down viewer base in this bizarre time-out period, and are probably open to focusing on conversation-starter sites like HE. Particularly in the realm of prestigious miniseries like FX’s Mrs. America, which I plan on watching tomorrow or Tuesday. 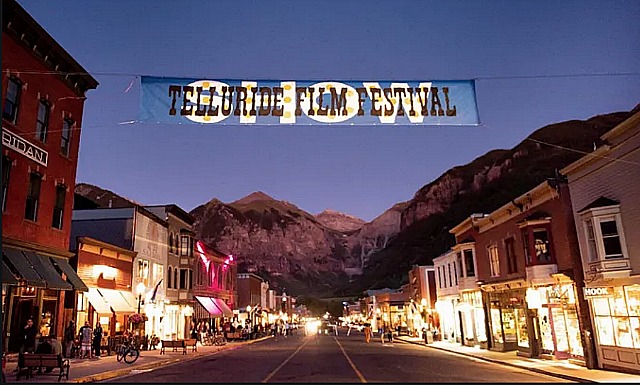 The conversation strayed to Oscar season and which early fall festivals might happen during what we all hope and pray will be the tail-end of the pandemic. We acknowledged that even if the virus begins to ebb sometime in June or July nobody is going to want to fraternize in close proximity in northern Italy, the #1 death camp locale before the United States and particularly the New York City area took over in that regard.

What about Toronto? Also doubtful, it seems. Ditto the New York Film Festival (late September to mid October), but who knows? After practicing social distancing for a half year with masks and gloves who in their right mind would want to parachute into a dense urban environment with mobs of film lovers, tightly packed theatres and nightly social gatherings?

The smaller, eternally cooler Telluride Film Festival might work out, at least theoretically. Especially if Tom Luddy and Julie Huntsinger are extra careful about not allowing each and every seat to be occupied and are perhaps even open to staging the festival a week or two later than usual, especially if the coronavirus fade doesn’t begin until July or, God forbid, early August.

Will Oscar season happen? If the pandemic lifts when it probably will, yes. Certainly! But with some big summer films getting bumped into the fall as we speak (including Top Gun: Maverick, No Time To Die and Wes Anderson‘s The French Dispatch with Chris Nolan‘s Tenet sure to follow) it’s going to be a hell of a jam-packed season.

In a piece titled “Oscar Contenders in 2020 Must Face a Complex and Uncertain Path to Success“, Indiewire‘s Anne Thompson says the following:

“Festivals play an enormous and vital role in establishing and vetting award-season contenders. How will foreign films become viable awards candidates without them? When will films open in their countries and build some kind of following?

“Of course, we do not know where the world will be in late August (Venice) or Labor Day (will sleepy Telluride, Colo. welcome intruders from the coasts?) or September (will industryites be willing to fly to Toronto or New York?) or October (the Hamptons, London?).

“It’s easier to imagine local festivals playing to their home audiences than pulling in buyers and sellers from around the world, although that’s an urgent necessity for the global film market, especially without Cannes.”