Rick Worley‘s “Woody Is Innocent” essay (posted four days ago — 5.14.20) lasts two hours and 34 minutes. Very exacting and specific — all fibre, no fat. If you don’t have that much time to invest, the first 12 minutes more or less covers it. In my opinion Allen’s innocence is irrefutable. The Mia Farrow allies and Woody haters (including the #MeToo-ers who continue to intimidate and terrify U.S. distributors) will never listen, of course. Here, again, is Moses Farrow’s Woody-exonerating essay.

Fat-shaming is not only verboten, but descriptive terms that even flirt with the perimeters are also outlawed. In this verbally cautious realm you’re not supposed to call anyone “morbidly obsese,” and yet earlier today Nancy Pelosi referred to Donald Trump with the m.o. term.

Incidentally: I’m not disputing Pelosi’s use of said term, which basically means “heavier than garden-variety obese.” But I wonder what term she would have chosen if she’d been with Tatyana and I at El Matador beach last Sunday. I’m sorry but we saw some women who were truly scary in this regard.

Michel Piccoli, the renowned French actor who seemed to costar in almost every noteworthy French film in the mid to late 20th Century, has passed at age 94. I’ve been trying to decide which Piccoli performance is my favorite, and I honestly can’t decide. Okay, maybe his weary, blocked painter in Jacques Rivette‘s La Belle Noiseuse (’91).

He was always a reliable, trustworthy presence. An actor who always seemed to calm things down. Always plainspoken, genuine, discreet.

And the late ’60s and ’70s, it seemed to me, was his peak era, although he kept going as a working actor through the next three succeeding decades. One of his last theatrical films, Lines of Wellington, opened in 2012.

Yesterday I stumbled across a shot of Deborah Kerr and Donna Reed performing the final scene from Fred Zinneman‘s From Here To Eternity (’53). On a ship departing Honolulu by way of a sound stage. No one is more queer for behind-the-scenes snaps of this 1953 classic than myself, be they color or black-and-white. So I went hunting for all the decent ones I’ve ever seen or previously posted, and here they are. (The sixth from the top was taken by yours truly during the May 2001 Pearl Harbor junket.) 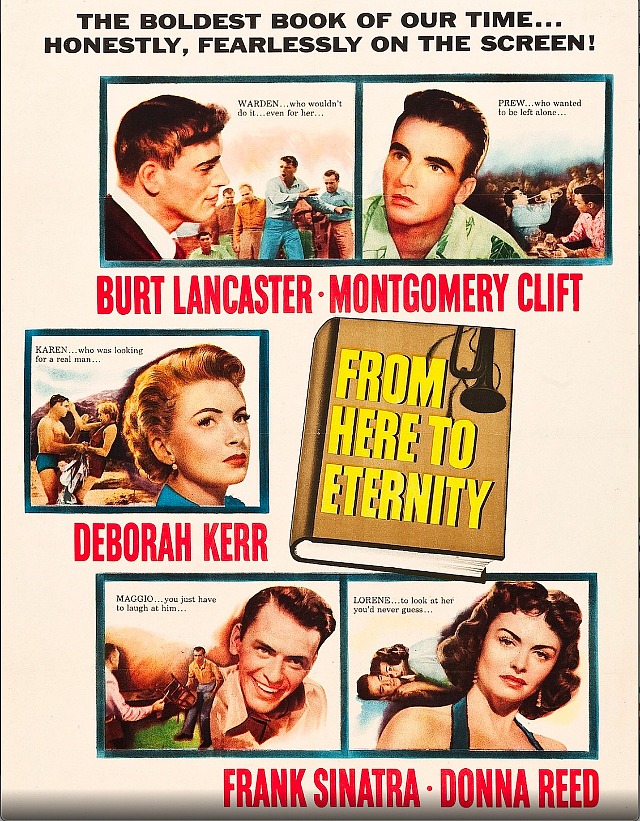 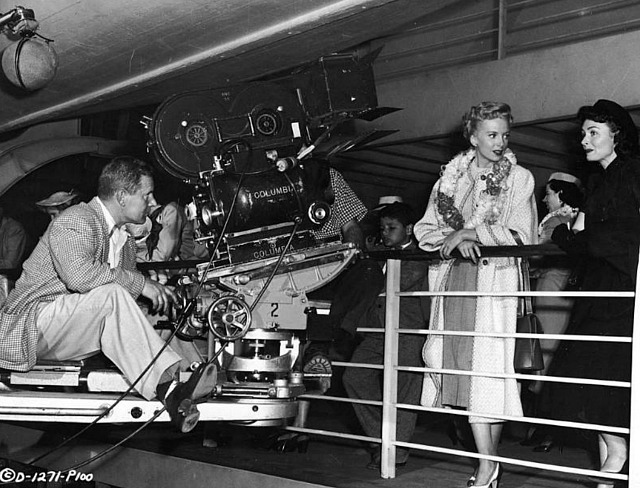 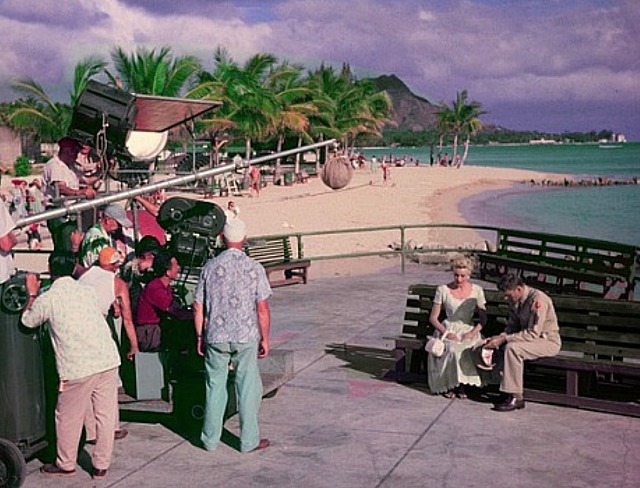 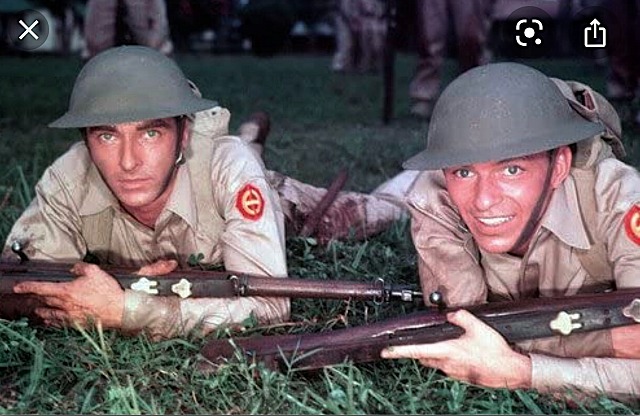 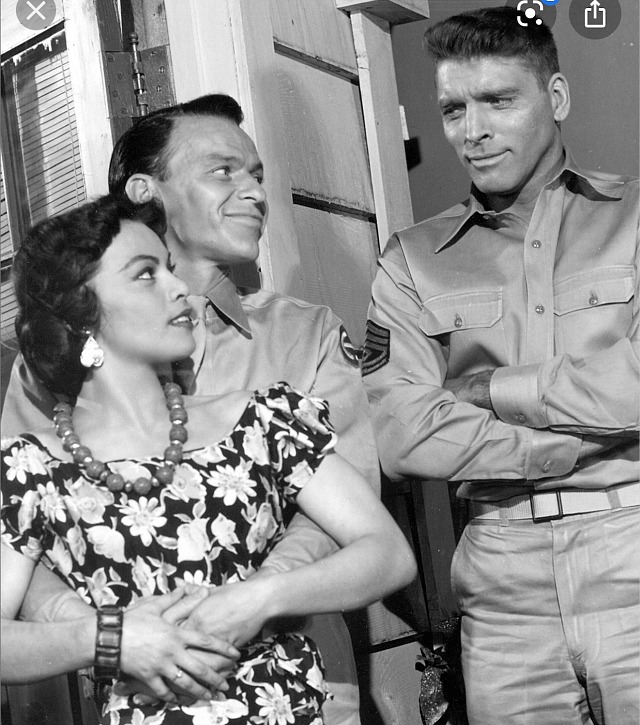 I’ve changed my mind about From Russia With Love. It’s now my #1 favorite early-era Bond film, followed by Dr. No. I still swear by that epic train-compartment fight between Sean Connery and Robert Shaw.

He started about two weeks ago, he said. 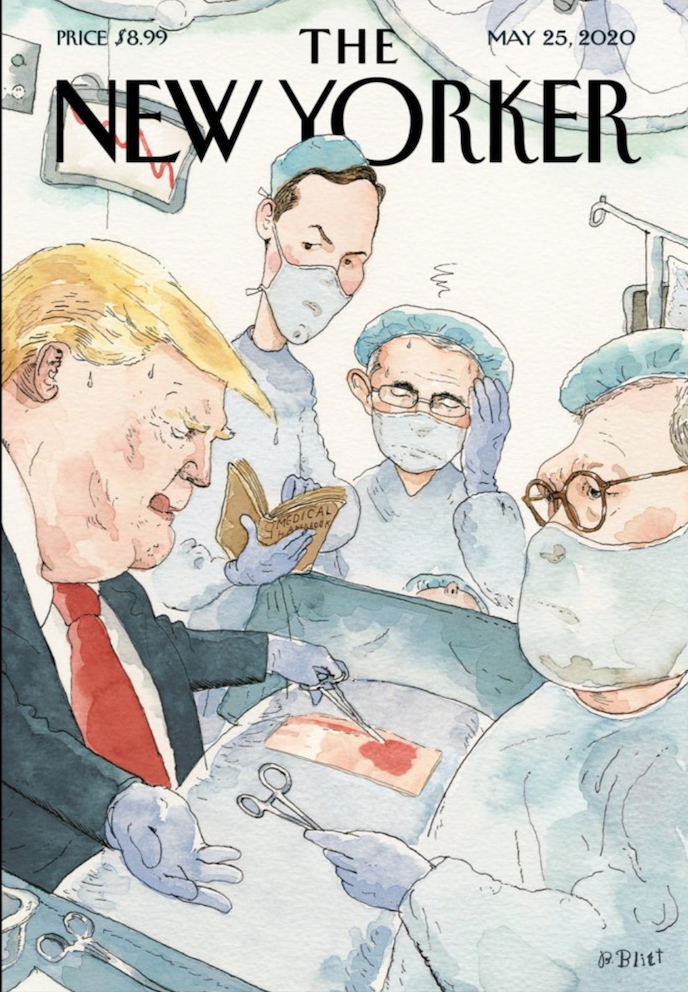 26 Comments
With Farrow Under Fire, #MeToo Hits Back

I am 98% certain that Ronan Farrow is full of shit when he maintains that Woody Allen sexually molested his younger adopted sister, Dylan Farrow — an alleged incident that happened in August 1992, when she was 7 and Ronan was 4. His insistence that all the Woody-exonerating evidence (which there’s a ton of) and the Woody-exonerating view of his adopted older brother Moses is not to be trusted is, I feel, inescapably deranged.

I also strongly suspect that he’s the biological son of Frank Sinatra, whom Mia Farrow once speculated may “possibly” be his actual dad, and not Woody, whom Ronan doesn’t begin to even slightly resemble — looks, temperament, nothing.

Otherwise he’s obviously a respected investigative journalist who’s done some excellent work regarding Harvey Weinstein‘s history of sexual assault, and of course with the best-selling book “Catch and Kill“, which also accused NBC News of discrediting or dismissing his investigative work along these same lines. 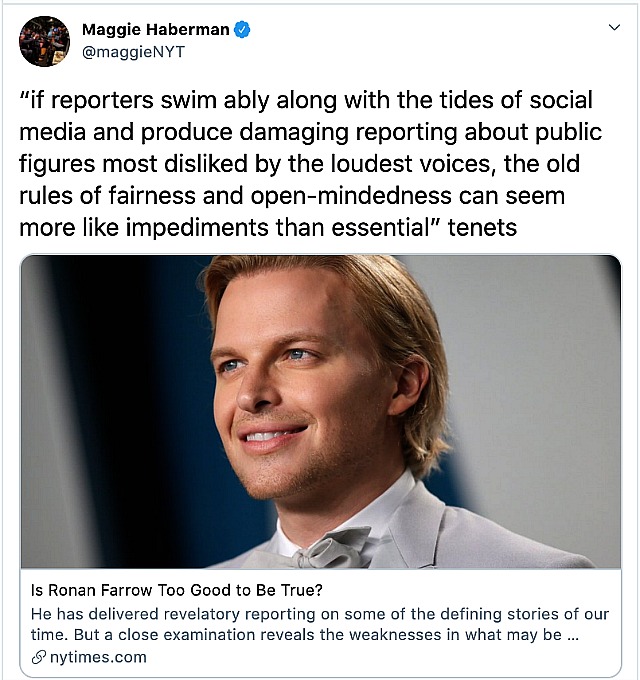 But now Farrow himself is taking a bit of sniper fire. The bullets were fired yesterday by N.Y. Times reporter Ben Smith (former editor-in-chief of Buzzfeed) in a piece titled “Is Ronan Farrow Too Good to Be True?“, and subheaded as follows: “He has delivered revelatory reporting on some of the defining stories of our time. But close examination reveals the weaknesses in what may be called an era of resistance journalism.”

In response to Smith’s article Robespierre purists are twitter-slamming the N.Y. Times for daring to go after a figure they regard as the triumphant crusading knight of wokester #MeToo journalism.

One reliable measure of wokester fervor is Vulture columnist Mark Harris, who tweeted today that access journalism is just as fraught with problems and prejudices as resistance journalism. Writer-comedian-podcaster Akila Hughes tweeted that Smith wrote the Farrow hit piece out of jealousy.

Journo pally: “It’s interesting where I think perhaps you and I differ on the significance here. You see the Robespierre of it all and I see the media monopolies twisting truth into pretzels of it all.

“I just watched a doc from around 2012 called Shadows of Liberty, which is the leftward view of how dangerous ‘fake news’ really is. Now that Trump has co-opted that clarion call, is the news any less fake that all the leftists were saying it was before Trump ever stumbled onto the public stage? ‘Resistance journalism’ is a fancy term for propaganda. Just like Fox imho.

“In any event, this is a major piece.” 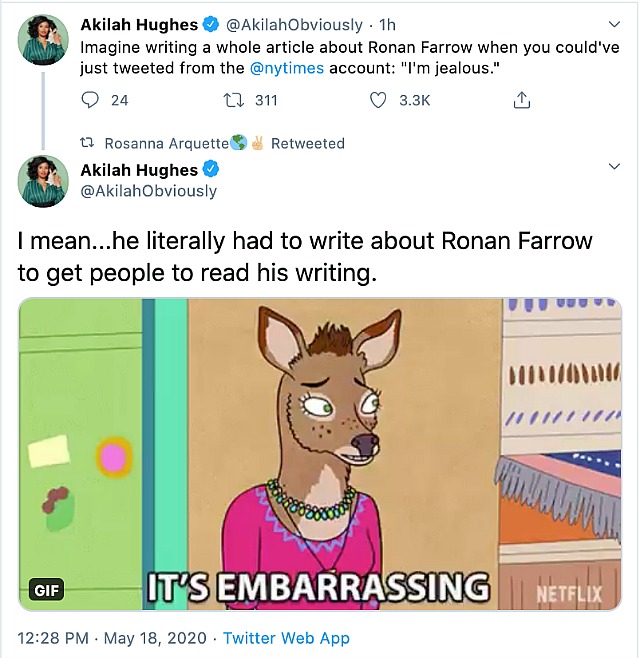 Ken Osmond, otherwise known as Eddie Haskell, the Leave It To Beaver king of flagrantly insincere teenage suckuptitude, has bitten the dust. He was only 76 but we’re all specks of dust in the cosmic sprawl of backyard leaves, and when God comes along with a rake…scratch that. When your number’s up, it’s up.

No history of 1950s and early ’60s sitcoms would be complete without raising a glass to Haskell, a one-note but essential superstar character who was easily on par with Bob Denver‘s Maynard G. Krebs, Fess Parker‘s Davy Crockett and George Reeves‘ Superman.

Haskell became an iconic figure because every high-school sufferer knew and recognized him. Because high schools of the Eisenhower and JFK eras were unfortunately punctuated with Eddie Haskells…completely devious weasels, totally consumed with showing deference to authority figures with the most revolting kiss-ass phrases and kowtowings.**

What happened to Eddie Haskell when psychedelic substances took hold in the mid ’60s and everyone had to reckon with them one way or the other? What happened to him when he smoked DMT in his mid 20s? I’ll tell you what happened to him. He started rubbing his cordouroy-covered thighs and then stared at the ground beneath his feet, going “uh-oh…uh-ooohhhh”. And then he looked up at the night sky like Anthony Quinn‘s Zampano at the end of La Strada and said something like “aacckk-aacckk-aacckk!”

Osmond had a tough time finding new work because of the Haskell typecasting. He called it “a death sentence,” and he presumably knew whereof he spoke. He joined the LAPD in ’69, growing a moustache in order to hide the Haskell. On 9.20.80 Osmond was shot five times by a suspected car thief, but four bullets were absorbed by a bullet-proof vest and the fifth hit his belt buckle. He was placed on disability and eventually retired from the force in ’88 at the age of 45.

Wiki excerpt: “Osmond returned to acting in 1983, reprising his role as Eddie Haskell in the CBS made-for-television movie Still the Beaver, which followed the adult Cleaver boys, their friends, and their families. This led to the revival comedy series The New Leave It to Beaver, which premiered the following year and ran for four seasons — ’84 to ’89.

He continued to make television appearances throughout the ’80s and ’90s on Happy Days, Rags to Riches, and in the TV movie High School U.S.A. He also had a bit part in the 2016 indie movie Characterz. In 2011 Osmond began appearing as a celebrity spokesman for St. Joseph aspirin.

Osmond died earlier today. No cause of death revealed. Hugs and condolences to all concerned.

Spike Lee movies always confront, excite and challenge. The engine is always turned on. Excellent aspect-ratio immersion, haunting Chamber Bros. time tunnel, half early ’70s and half now. Oh, that Vietnam humidity, aroma and general atmosphere, which I’ve sampled first-hand on three separate occasions (’12, ’13, ’16), And those ghosts (including Chadwick Boseman‘s) swirling up and around and through. Pops on 6.12, or a little more than three weeks hence. 154 minutes.