If and when The Beast says anything about the 2.23.20 murder of Ahmaud Arbery by suburban Georgia vigilantes, and especially the foot-dragging response by local authorities to an obviously unwarranted shooting by gut racists, it’ll be some kind of Charlottesville statement — i.e., respect due process, “there are many good people in Georgia”, killing is bad but black guys shouldn’t grab a white man’s shotgun, blah blah.

This is obviously Trayvon Martin II. The case blew open yesterday with the release of video of the shotgun slaying.

Boilerplate: “On 2.23.20 Ahmaud Arbery, a 25-year-old African American man, was shot dead while running near Brunswick, Georgia. Arbery was unarmed and running on a road, when he was chased and then confronted by three white bubbas with a pickup truck: Gregory McMichael, his son Travis McMichael and William “Roddie” Bryan. The confrontation involved Arbery trying to grab one of the men’s gun, and resulted in Travis fatally shooting Arbery.

Update: Two arrests (the shooter son and the father) happened today. Earlier: An anonymous YouTube video of the shooting was publicized on May 5th on a radio station website, before being reposted on Twitter by the attorney for Arbery’s family; it went viral. After the video’s release, the presiding prosecutor, Atlantic Judicial Circuit District Attorney Tom Durden, said a grand jury would decide whether charges would be brought.” 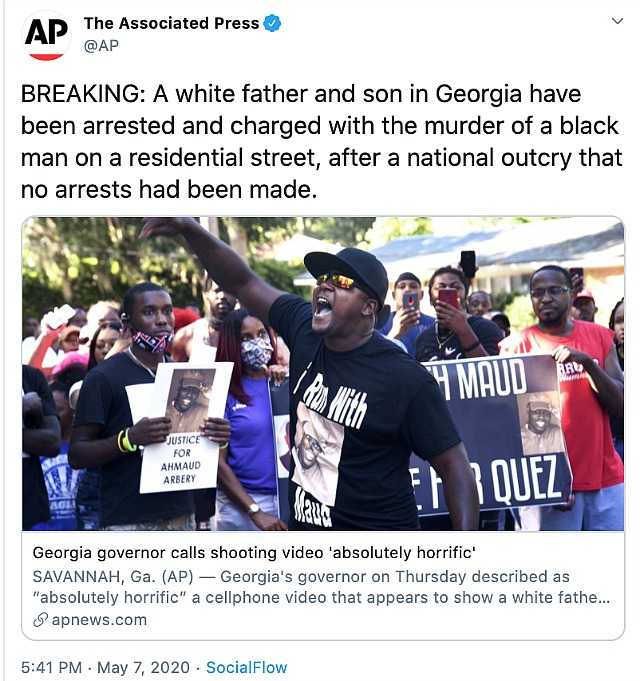 .@sunny on Ahmaud Arbery: “The President has been silent about it. He can tweet about EVERYTHING ELSE. Fake news, attacking late night hosts, but he can’t offer his thoughts on this? This is despicable.” pic.twitter.com/sD1UbsvaPy