Garrett Hedlund and Kelly Macdonald play Luther and Georgie. At the very least Sam Chiplin‘s cinematography seems appealing. We all understand that some books simply don’t translate to the screen, and sometimes they’re not adapted in quite the right way.

Either way you can’t help but wonder what might have happened if the original Dirt Music team — director Philip Noyce, costars Heath Ledger and Rachel Weisz, and screenwriters Justin Monjo and John Collee — had made their version a decade or so ago. 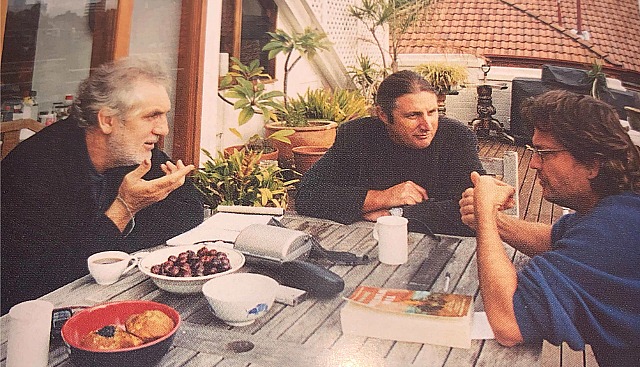 Noyce had been working on a Dirt Music flick even before Winton’s novel became an Australian best-seller in ’02. He had the option to make a film version for roughly 11 years, from before publication until sometime in 2012. Noyce had wanted Rachel Weisz to play Georgie — she wound up being attached to the project for several years. In February ’07, with the project very much alive and ready to roll, Noyce ran into his leading man.

“One morning, walking with my coffee in Sydney, a Range Rover pulled up at a pedestrian crossing,” Noyce recalls. “Down came the window, and there was Heath Ledger. We agreed on the spot to shoot the film in Western Australia eight months later with Rachel.”

But the usual delays occured, and then Ledger died of an accidental overdose on 1.22.08. He was 28 years old.

“And I could never find the same spark for making the film with anyone else,” Noyce laments. “Not with Colin Farrell nor with Russell Crowe. No one could be the Luther Fox that Health showed me that morning in Sydney.”

In November 2011 Noyce asked Chris Hemsworth to play Luther for a shoot that would have begun in March 2013. That didn’t pan out either. Noyce’s option expired.

Along came Gregor Jordan. Jack Thorne (The Eddy) was engaged to write a new script. In August 2018 Hedlund and Macdonald were announced as the costars. Filming eventually happened in Kimberley, Western Australia, as well as Perth and Esperance.

May 24, 2020by Jeffrey Wells7 Comments
« Previous post
Best “Trip” Of The Four
Next post »
Have Faith, Hold Fast