In Memory of Tara Reade

In a 5.5. N.Y. Times column titled “Joe Biden Would Rather Be Talking About Something Else“, neither Bret Stephens nor Gail Collins seem to understand that the Tara Reade thing is totally over.

That aside, Stephens supplies an interesting comment about Joe Biden: “[He] needs to articulate some kind of idea about his prospective presidency that is larger than ‘I’m not insane, I’ve been around, and Barack Obama likes me.’

“We are moving into a dark world of recurring outbreaks of disease and deepening depression. We may not have a vaccine for years. Thirty million-plus Americans have just lost their jobs. We are going to be more insecure, at home and abroad, than at any time in decades. Millions of businesses, particularly small ones, may go bust. Authoritarian regimes, particularly China, may be strengthened by the pandemic because they are less scrupulous about protecting the lives and health of their citizens. People are going to be tempted, even more than they were before Covid-19, by all kinds of populist or authoritarian political programs. We’ll have more to fear than fear itself.

“In other words, I don’t think Biden can win by selling himself as the second coming of George H.W. Bush when what we really need is closer to the F.D.R. mold. Not that I’m in favor of another New Deal, but we probably need a New Think.” 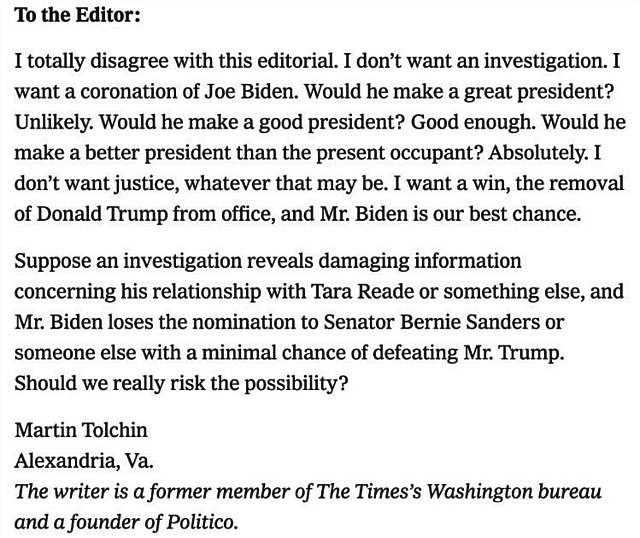