There are three reasons why Derrick Borte, Carl Ellsworth and Russell Crowe‘s Unhinged (Solstice Studios, 7.1) is suddenly a major wanna-see. One, it’s Steven Spielberg‘s Duel meets Joel Schumacher‘s Falling Down, and we all know the name of that tune. Two, it’s about a hair-trigger situation that we’ve all experienced at one time or another, and in a broader sense about the general bottled-up rage that lies just beneath the surface of American life these days. And three, some of us have felt like Crowe’s character at one time or another (to our shame), but more of us have unwisely behaved like Caren Pistorious‘s enraged mom.

Crowe is the classic madman, but Pistorious is more of a villain because she won’t won’t dial it down when he apologizes. She drew first blood, not him.

Wiki note: “Originally scheduled to be released on September 4, 2020, Unhinged was moved up to July 1, 2020, in order to ‘likely be the first to test the waters as theaters try to rebound‘ from the COVID-19 pandemic.” 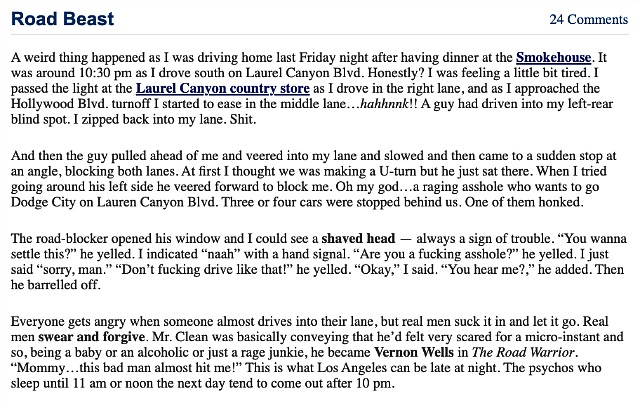