Val Kilmer as Will Sampson

Said before, saying again: I harbor no ill feelings about Val Kilmer. The opposite, in fact.

I helped report that “Psycho Kilmer” Entertainment Weekly article that ran in mid ’96, but I had a nice chat with him at a party he threw at his home back in ’04 or thereabouts. (He had just finished working on Oliver Stone‘s Alexander.) I ran into Kilmer again in the fall of ’11 while having lunch with Descendants costar Judy Greer. We waved and smiled as Kilmer sat at a nearby table. When I tried to pay the bill the waitress told me the check had been taken care of by “that man sitting over there,” except Kilmer had left by that point.

In Taffy Brodesser-Akner‘s “What Happened to Val Kilmer?” (N.Y. Times, 5.6.120), the 60 year-old Kilmer asks, “You don’t think we will be going to Cannes? How about the Olympics? The Olympics has never been canceled except in time of world war.” You can’t cancel the world, right? Bad things happen, but you still need art. 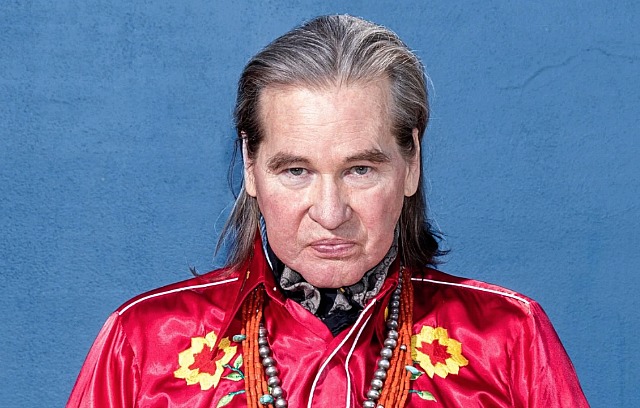 TBA: “And I thought: Right? Right! You still need art. You still need forward momentum. You still need to believe that all your effort wasn’t for nothing, that we could — we will — survive a dark moment in history and that when that happens, we won’t be left without the things that made those moments decipherable and meaningful and therefore tolerable.

“The world outside had seemed to be getting so, so bad for so, so long, and this was the first whiff of overarching hope and positivity that I’d witnessed in I couldn’t remember how many months or years now — so much so that I almost couldn’t identify it when I saw it. The last glowing embers of hope coming from Val Kilmer? The movie hunk of my youth, who disappeared unceremoniously and now presented with an entirely different appearance and a bizarre accounting of where he’d been?

“But there was something familiar about it, like a faint knocking that came from inside me: It was the special kind of optimism that maybe only the faithful have, the enduring belief that some force will come along and save us from the centrifuge of despair we’ve found ourselves in. When is the last time you saw that up close?

Later in the piece: “Perhaps we had created the coronavirus out of our fear and wickedness — children in cages, the rich hoarding wealth; perhaps we had only the suggestion of a virus. I grew up with too many messianics in my household. I found this kind of thing too easy to believe, if only because it was more believable than the fact that in 2020, my young, healthy colleagues were in the hospital, the streets were bare, I was stuck inside my house and nobody knew how long that might go on for. It was so hard to parse all the fear that permeated society now — what was real and what had come as a result of our own hysteria. During the day I’d think that it was the fear that was hurting us most.

“But at night my husband would shake me to wake me up because I’d been crying in my sleep. More quickly than I could have imagined, the world took on the hallucinogenic quality of right before you fall asleep, when everything is outsize and nothing makes sense. The margins on my suspension of disbelief started to close in on themselves, and the borders of things began to diminish, and now the world seemed like a word you stare at so long that it becomes nonsense.”