“Palm Springs is insane. Screenwriter Andy Siara knows we’ve seen our share of time-loop movies. He knows the problems we have with their plot holes and logic gaps. And he knows that the rules in this genre never, ever make sense, which is why he goes a completely different direction here — well, not completely different.

“Taking a page from Russian Doll Nyles (Andy Samberg) realizes that he’s not the only one caught in a loop. The CG in this movie looks terrible (so bad that it almost becomes funny), but that earthquake we saw at the beginning opened some glowing rift in the space-time continuum, situated in a remote desert cave, and when he enters, anyone who follows him in winds up cursed to relive Nov. 9 forever.” — from Peter Debruge‘s Variety review, posted from Park City on 1.28.20

For now, I mean. I haven’t seen A League of Their Own (“There’s no crying in baseball!) since the early days of the Clinton administration. I love Jerry Maguire but how much better can it look? I was underwhelmed by Gandhi back in ’82, and feel no special urge to revisit. I’m mildly interested to see how good the black-and-white might look in Mr. Smith Goes to Washington, but no big hurry. 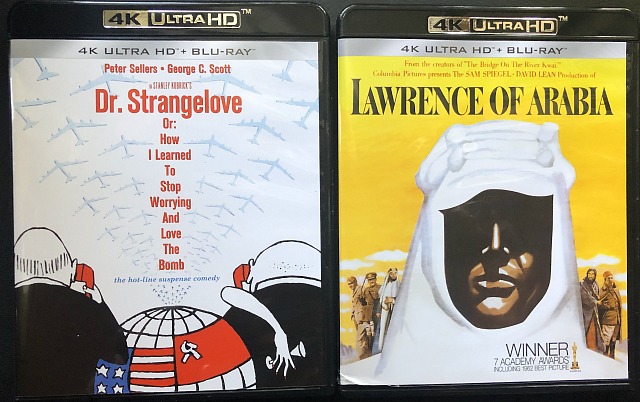 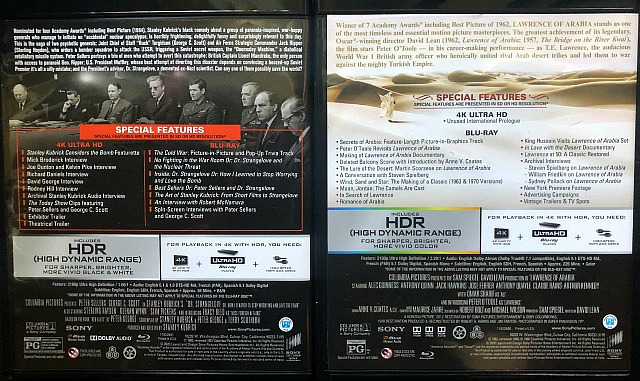 2 Comments
Instead of “Happy Birthday”…

I sent this message to a friend celebrating the sum of it, the all of it. 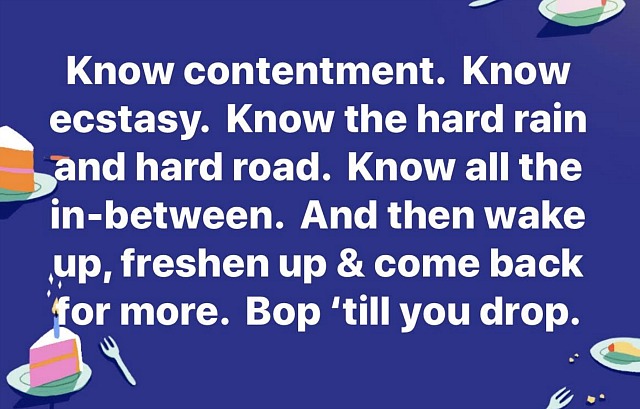 During the 1958 filming of Some Like It Hot, it took 59 attempts before Marilyn Monroe was able to say “where’s that bourbon?” in just the right way, or at least to director Billy Wilder‘s satisfaction.

For years this was a fascinating, oft-repeated anecdote — an example of how much effort and sweat it could take to get a scene right. But many such stories have cropped up in the 60-plus years since the Monroe-Wilder incident. Stanley Kubrick was alleged to have asked Harvey Keitel to perform a certain scene in Eyes Wide Shut more than 59 times. (I forget the exact number.) And of course, David Fincher is legendary for asking his actors to do dozens upon dozens of takes.

But now comes Mank costar Amanda Seyfried with a story about Fincher having her perform a single line — “You think I can just relax?” — roughly 200 times. The story was passed along yesterday by Collider‘s Tom Reimann.

Seyfried quote: “I was part of scenes with tons of people in it and we would do it for an entire week. I can’t tell you how many takes we did, but I would guess 200, maybe I could be wrong and could be way off. Uhm, I could be underestimating by five days of one scene when I didn’t have one line…‘You think I can just relax?’ No, because there are probably about nine or 10 different camera angles that had been on me at one point.”

From Jennifer Szalai‘s 6.17 N.Y. Times review of a National Security Adviser’s tell-all: “In ‘The Room Where It Happened,’ John Bolton Dumps His Notes and Smites His Enemies”: 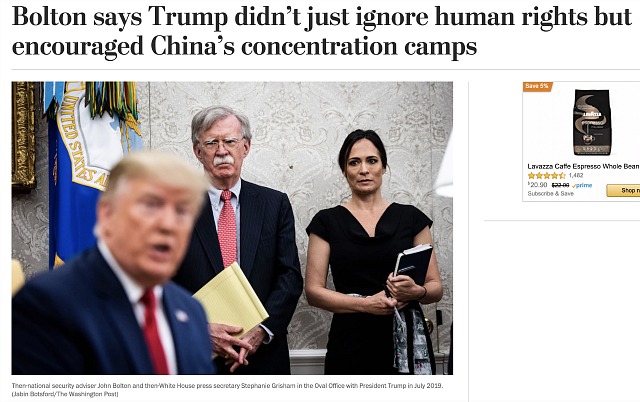 47 Comments
Bruh Uniform On The Links

Last weekend Margot Robbie‘s producer husband Tom Ackerley offered further proof that the low-rent bruh uniform (about which I reposted three days ago) is scrupulously followed worldwide, regardless of wealth or status. Shorts, low-thread-count T-shirt, backwards baseball cap, closely-trimmed whisker beard, whitesides without socks. From Timbuktu to Tunbridge Wells to Tallahassee, they all look like the exact same bruh. 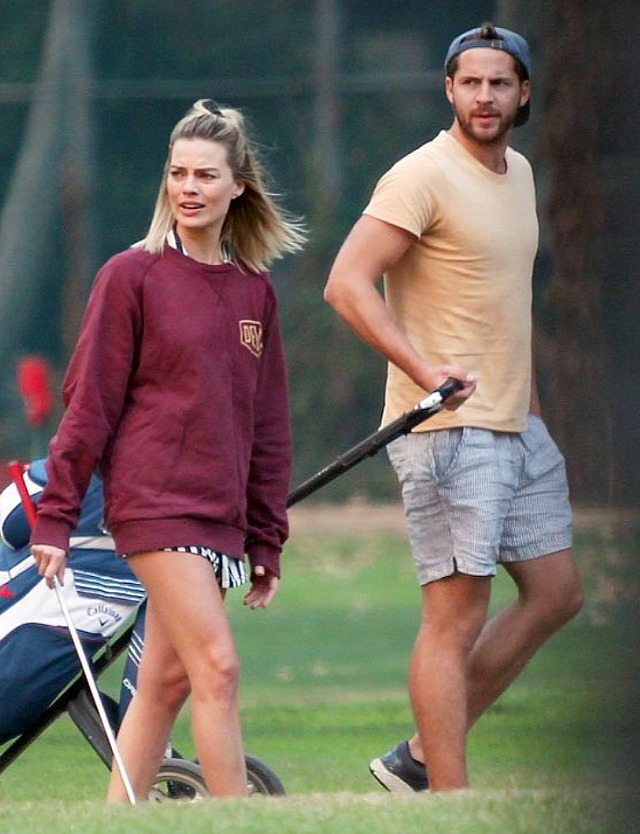 Due to roll in early ’21, the Steven Knight-scripted drama will “cover a three-day period in the early ‘90s, when Diana decided her marriage to Prince Charles wasn’t working, and that she needed to veer from a path that would put her in line to one day be queen,” Fleming reported.

Diana’s chosen path, as we all know, turned out to be sporadic and wayward, and was chiefly defined by a series of extra-marital and post-marital affairs (Barry Mannakee, James Hewitt, James Gilbey, Oliver Hoare, Theodore Forstmann, JFK Jr., Bryan Adams, Hasnat Khan). It ended tragically when she and the totally worthless Dodi Fayed died after a high-speed car crash in Paris on 8.31.97.

Right off the top, the Larrain-Knight project is flawed for two reasons.

One, nobody cares about Diana’s decision to bail on her marriage to Prince Charles in ’91 or thereabouts. What they want to see, of course, is a Harold Pinter-esque drama about her tragic, idiotic affair with Fayed with a special focus on (a) the particulars of her last few hours of life, and (b) the worldwide reaction to her death including the funeral and the Elton John performance of “Goodbye, English Rose.” 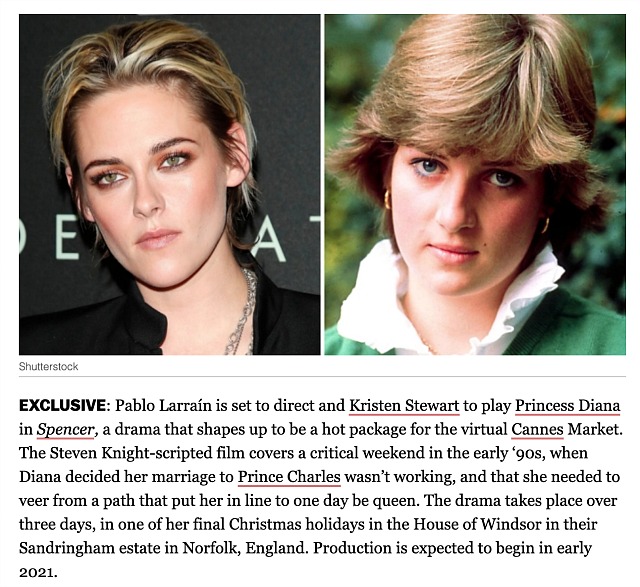 And two, the 5’5″ Stewart is way too short to inhabit the physical realm of the 5’10” Diana. Diana was seriously statuesque (5’10” in heels = six feet) and nudging the giraffe realm while Stewart — be honest — is smallish. It would be one thing if she stood 5’7″ or 5’8″ but she’s five full inches shorter than the Real McCoy — you might as well call it half a foot.

Plus Stewart doesn’t look anything like Diana in terms of eye shape or facial bone structure. She was a passable Jean Seberg as they shared certain similarities, but even the makeup guy who transformed Charlize Theron into Megan Kelly would be at a loss.

Larrain has twice cast too-short actresses as famous women — the 5’3″ Natalie Portman as the 5′ 7″ Jackie Kennedy (which didn’t work — Portman was simply too runty), and now Stewart as Spencer.

My pet theory is that Larrain, who himself only stands 5’7 1/2″, prefers to cast women who are shorter than himself.