“A Minor Point At Such A Moment”

Gone With The Wind has been shunned once again, this time by HBO Max, and HE is still saying “yes but hold on.” For despite its deeply offensive depictions of the antebellum South and a culture that was founded upon the ruthless exploitation of African-American slaves, the second half of the first act of Gone With The Wind is nonetheless great cinema.

Because, as I wrote five years ago, GWTW is not actually about this odious history and these conditions. Not really, not deep down. For it is fundamentally a film about how life separates the survivors from the victims when the chips are down, and about the necessity of scrappy, hand-to-mouth survival under the cruelest and most miserable of conditions. It basically says “only the strongest and the most determined survive.”

In June 2015 former N.Y. Post film critic Lou Lumenick called for a shunning of Gone With The Wind because of “undeniably racist” attitudes embedded in its story and characters. A little more than two years later (late August of ’17) the board of Memphis’ Orpheum Theatre announced it would no longer show Gone With The Wind as part of the Orpheum Movie Series due to complaints. The board deemed the 1939 film “insensitive” after receiving “numerous comments” that stemmed from a screening on Friday, 8.11.17. 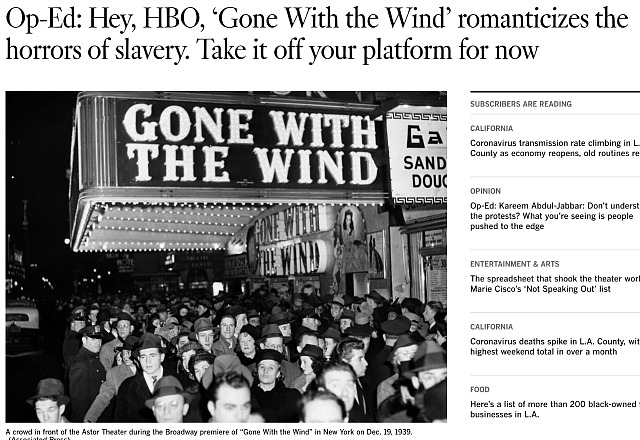 And now another shoe has dropped upon David O. Selznick and Victor Fleming‘s Oscar winner with the announcement that HBO Max will no longer stream it.

The move came partly in response to “media companies reappraising content in light of nationwide protests over police brutality and systemic racism after the death of George Floyd,” according to a 6.9.20 Hollywood Reporter piece by Abid Rahman.

Another nudge was felt from a Los Angeles Times op-ed by 12 Years A Slave screenwriter John Ridley, published Tuesday (6.9). The headline read “Hey, HBO, Gone With the Wind romanticizes the horrors of slavery. Take it off your platform for now.”

GWTW “glorifies the antebellum south,” Ridley wrote. “It is a film that, when it is not ignoring the horrors of slavery, pauses only to perpetuate some of the most painful stereotypes of people of color.”

Ridley is, of course, correct. There’s never been any question that Selznick’s epic ignores and sugarcoats the realities of 19th Century slavery, and that its Technicolor depiction of the Old South as a fair land of cavaliers and cotton fields makes it in some ways a dark and odious fantasy piece — the anti-12 Years A Slave. Consciousness does evolve and for all its polish and grandeur, Gone With The Wind has become more and more of an unsavory antique in some respects. No argument there.

“But I feel misgivings,” I wrote on 6.26.15. “I don’t believe it’s right to throw Gone With The Wind under the bus just like that. Yes, it’s an icky and offensive film at times. The moment when Vivien Leigh‘s Scarlett O’Hara slaps Butterly McQueen‘s Prissy for being irresponsible in the handling of Melanie giving birth is ugly, to say the least. And the depiction of Everett Brown‘s Big Sam as a loyal and eternal defender of Scarlett in the face of thieves and would-be rapists is another head-scratcher.

“But every time I’ve watched GWTW I’ve always put that stuff in a box in order to focus on the real order of business.

“For Gone With The Wind is not a film about slavery or the antebellum South or even, really, the Civil War. It’s a movie about (a) a struggle to survive under ghastly conditions and (b) about how those with brass and gumption often get through the rough patches better than those who embrace goodness and generosity and playing by the rules.

“This is a fundamental human truth, and if you ask me the reason Gone With The Wind has resonated for so long is that generation after generation has recognized it as such. If you want to survive you have to be tough and flinty and sometimes worry about the proprieties later on. Anyone who’s ever faced serious adversity understands the steel of that classic Scarlett O’Hara line, ‘I’ll never be hungry again.’

“On top of which the second half of part one of Gone With The Wind (the shelling of Atlanta to Scarlett shaking her first at those red skies) is undeniably great cinema. Max Steiner‘s music, the struggle, the crowd scenes, the panic, the burning of Atlanta, Ernest Haller‘s cinematography, the anguish, the soldiers groaning and moaning, Scarlett’s drooling horse collapsing from exhaustion, the moonlight breaking through as she approaches Tara…you can’t just throw all that out.”

Yes, the film’s unfortunate racial attitudes, which were lamentably par for the course 80 years ago, are now socially obsolete. And I wouldn’t argue with anyone who feels that portions of it are too distasteful to celebrate, but it just doesn’t seem right to lock all of that richness inside some ignoble closet and say “no more, forget about it, put it out of your minds.”