Spike Lee‘s Da 5 Bloods (Netflix, 6.12) is a ghost-ridden Vietnam adventure flick. It’s set in the present but tethered to the past, and is basically a tangle of echoes, memories and associations that are kicking around in Spike’s head. Some of it connects and some of it doesn’t, but it’s always pushing and poking, always jabbing with a stick.

As you might expect in the current climate, reviews have been highly favorable. Everyone loves Spike and nobody wants a pickle. Me included for the most part. I was moderately okay with this effort when it ended. It didn’t leave me in an itchy or irritated place. I got it.

The script is about four black dudes in their late 60s (Clarke Peters, Delroy Lindo, Isiah Whitlock Jr. and Norm Lewis) trekking to Vietnam to accomplish two disparate goals. One, find the remains of a beloved squad leader (Chadwick Boseman) who died in a skirmish with the enemy. And two, find a cache of buried gold bars. 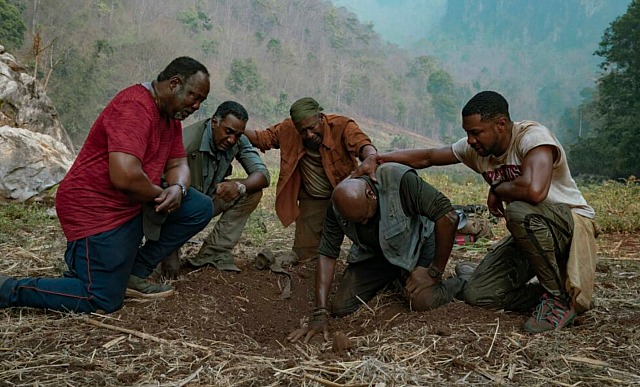 Why these guys have waited a half-century to do this instead of, say, 20 or 30 years ago is anyone’s guess. Peters to the other three in the early ’90s: “Hey, guys, I could use some extra dough. What about returning to Vietnam to collect all that loot?” Three comrades to Peters: “Naah, we’re too young for that shit. Let’s wait until we’re pushing 70.”

My three visits to Vietnam (’12, ’13 and ’16) were peaceful and nourishing. The vibes from the natives couldn’t have been gentler. All the young guys wanted to talk about were iPhones and iPads. Suffice that things are a lot more turbulent for Spike’s crew. Their treasure-hunt (or memory hunt) turns out to be a blending of Treasure of Sierra Madre and Who’ll Stop The Rain, and you know what that means. Bullets fly, mines explode, greed ignites, bad guys come out of the woodwork.

It would be one thing if the “bloods” were just trying to find Boseman’s remains, but the gold is a problem. A peaceful mission is not in the cards. The opposite, in fact. All the bad stuff they left behind in the ’60s comes surging right back. But at the very end it chills out. Tensions ease, sins are forgiven, etc.

I can’t honestly say that Da 5 Bloods comes alive the way BlacKkKlansman did when Spike threw in an epilogue that condemned Trump and the Charlottesville neo-Nazis, but it’s always trying for that kind of thing. All the then-and-now currents (including Black Lives Matter) crash into each other and kick up dust.

Lindo’s character. a short-tempered Trump supporter, is the most histrionic and bothered of the four. Peters (The Wire) is the deepest, wisest and coolest. Lindo’s son David (played by Jonathan Majors) also tags along, probably because someone decided that the ensemble needed some fresh blood.

The dialogue struck me as a little too on-the-nose, but there’s no mistaking where everyone is coming from.

Portions were shot in Ho Chi Minh City but otherwise in rural Thailand.

There’s a moment in which a Vietnamese ne’er-do-well channels not only the spirit but the actual dialogue of Alfonso Bedoya‘s “Gold Hat” in Treasure of the Sierra Madre. At another point the final line in Bridge on the River Kwai is heard. What can be said? Spike loves these films and wanted to pay tribute.

I loved, however, the decision to not de-age Lindo, Peters, Whitlock and Lewis in the ’60s-flashback combat scenes. I was enormously relieved, in fact, that Spike decided to ignore the aging process altogether. I don’t know if this decision was made because of cost, but it struck me as inspired.

Da 5 Bloods, as noted, is two movies in one. I would have completely content if the uncover-the-gold story had been abandoned and the film focused entirely on dealing with what happened with (and to) Boseman’s “Stormin Norman” character.

But I respected Lee’s attempt to try to mesh the two together and make a film in which 2 + 2 equals five.