Bring Us The Head of Ansel Elgort

57 and 1/2 years ago Paul McCartney authored a song about love/sex with a 17-year-old lassie. At the time (late October ’62) McCartney was on intimate terms with Celia Mortimer, who herself was 17. “I Saw Her Standing There” was released on 3.22.63 and nobody batted an eye. “Whatever, mate…the bird was 17,” etc.

But if, God forbid, 2020 cancel culture had somehow descended upon early ’60s England like a flash flood, McCartney might have sustained serious career damage if Mortimer had decided to accuse him after-the-fact of “sexual assault”, which can sometimes be translated as “it was my first time and a bit painful, and the sex wasn’t followed by tender emotional caresses and perhaps the beginning of a serious relationship, and so I felt used.” England’s age of consent was 16 at the time so at least the 20-year-old McCartney would have been legally in the clear.

Some of this reflects upon West Side Story star Ansel Elgort, 26, who is being accused of sexual assault for having had it off with a 17 year-old named “Gabby” in the vicinity of December 2014. (AE turned 20 on 3.20.14.) Right now #MeToo and safe-space Twitter wants him dead and dismembered. Even though the liason apparently happened in New York State, where the age of consent is 17. 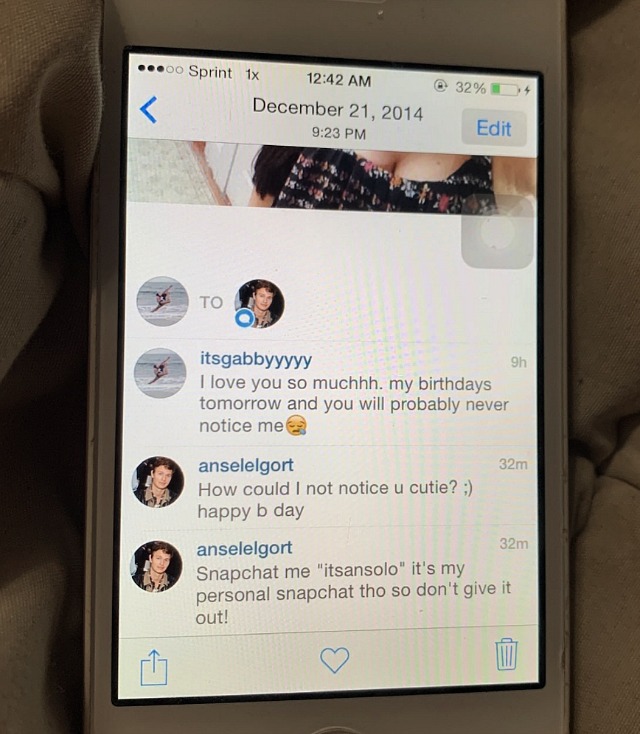 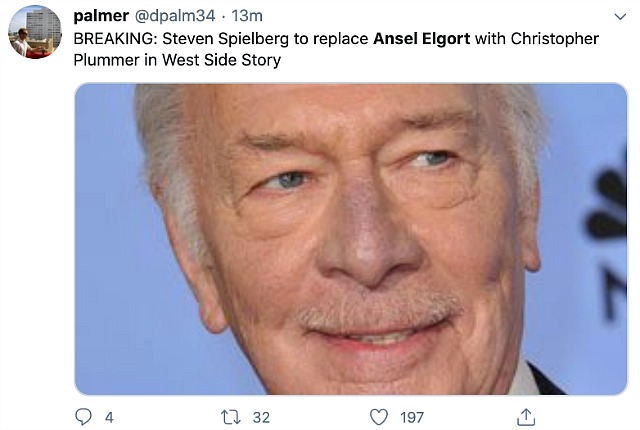 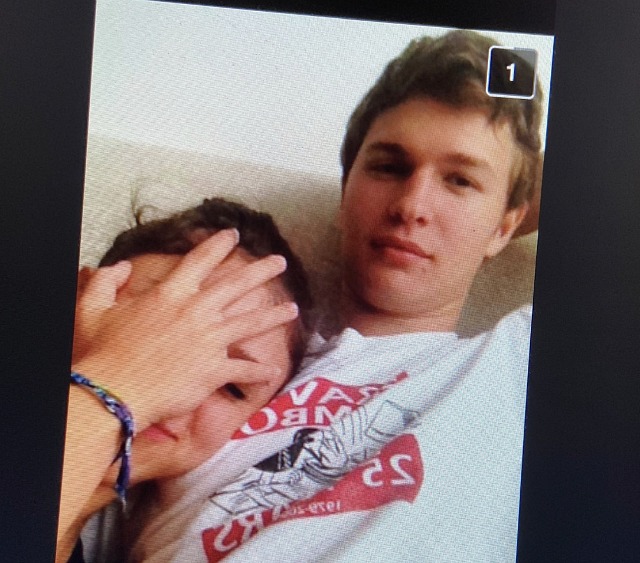 Except Gabby’s description doesn’t sound like sexual assault — the sex began as consensual if not eager-beaver on her part, but she felt badly afterwards. It almost sounds like an Aziz Ansari-type situation.

In the real world, of course, a 20 year-old guy having it off with a 17 year-old is far from Polanski-ville. Some Twitter fanatics have even claimed AE is guilty of pedophilia, which is ridiculous.

In any event Steven Spielberg and the the Disney-owned 20th Century Studios, the director and distributor of the forthcoming West Side Story (12.18.20), are…how to put this?…accepting of the Gabby situation (how could they not be?) but are probably not, shall we say, entirely at peace with it. The idea, I would imagine, would be to gently put a damper on the episode (and particularly the Twitter brush fire) in whatever way that might be deemed appropriate, sensitive and non-suppressive.

Oh, and the thing about Elgort having allegedly blurted out the n-word in high school? High-school kids say and do stupid, hurtful things all the time. Leave it there. 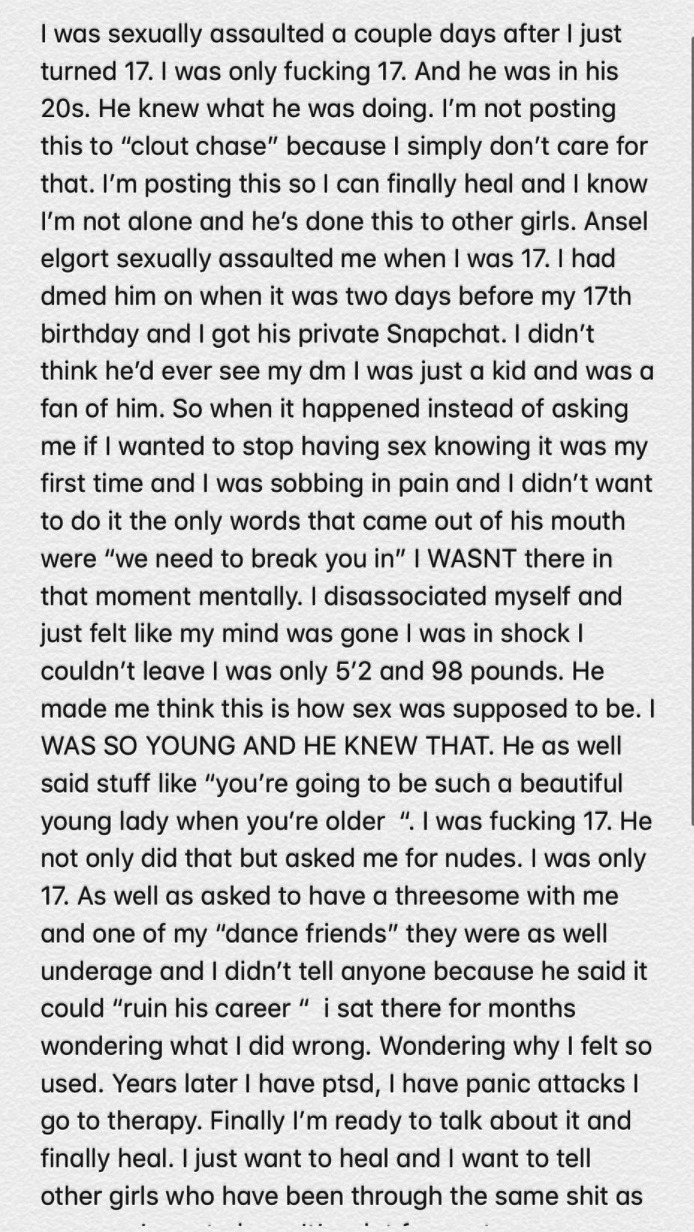 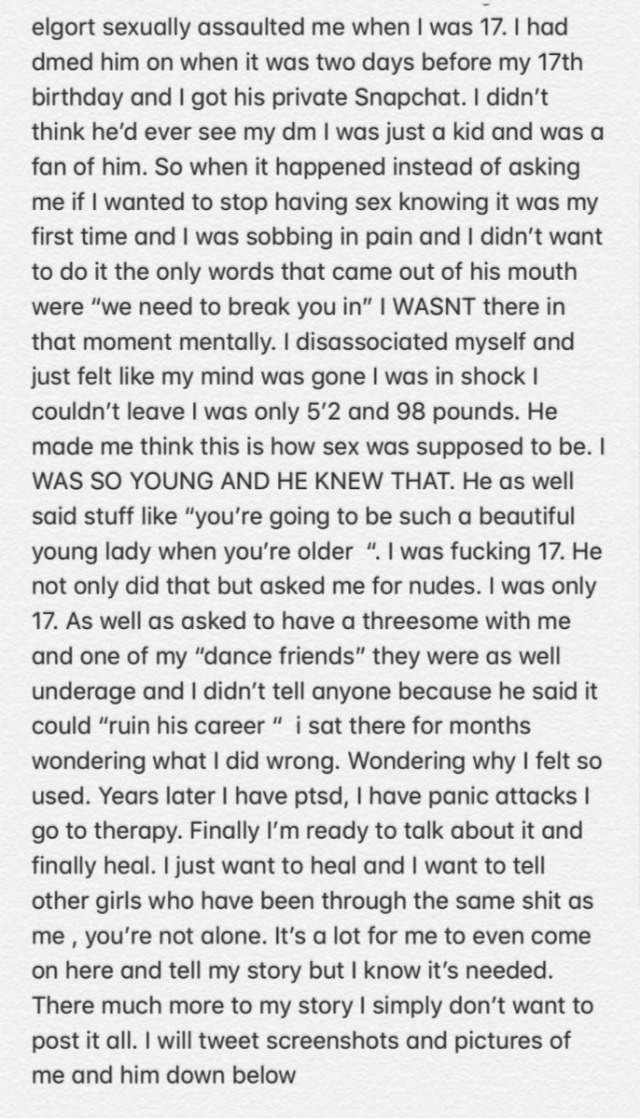