Two days ago a Winona Ryder interview, written by Laura Atkinson, appeared in the London Sunday Times (6.21). It contains two iffy quotes about Hollywood anti-Semitism, on top of which William Earl‘s 6.23 Variety piece about same omits the historical context regarding one of them.

Quote #1: Ryder tells Atkinson “there was a movie that I was up for a long time ago, it was a period piece, and the studio head, who was Jewish, said I looked ‘too Jewish’ to be in a blue-blooded family.”

HE question: What if this producer has told Ryder that she doesn’t look WASPy enough? There is such a thing as a fair-skinned, blue-eyed, descended-from-European royalty, to-the-manor-born appearance, no? Or is such an observation considered racist by today’s standards? Either way aren’t industry Jews allowed to say this to other industry Jews? It’s one thing for a WASP or Nordic or German-descended Hollywood hotshot to say “too Jewish,” but surely people of the tribe are allowed to share this opinion with one another…no?

Quote #2: Ryder repeats a mid-’90s story about running into a drunk, cigar-smoking Gibson at a Hollywood party (possibly at agent Ed Limato‘s annual Oscar shindig), and Gibson saying to Ryder, “You’re not an oven dodger, are you?”

HE comment: Obviously racist-creepy to the max, but Earl’s rewrite allows the lazy reader to presume that Gibson might have said this recently. In fact the same Ryder story appeared in a 12.16.10 GQ story by Alex Pappademas, to wit: “I remember, like, fifteen years ago, I was at one of those big Hollywood parties. And he was really drunk. I was with my friend, who’s gay. He made a really horrible gay joke. And somehow it came up that I was Jewish. He said something about ‘oven dodgers,’ but I didn’t get it. I’d never heard that before. It was just this weird, weird moment. I was like, ‘He’s anti-Semitic and he’s homophobic.’ No one believed me!”

So it happened around ’95 or thereabouts. Gibson suffered a career meltdown 11 years later when he was popped in Malibu for drunken driving and was famously quoted as having told a cop that “the Jews are responsible for all the wars in the world!” For what it’s worth, Gibson allegedly went into rehab soon after and apologized for his racist remarks and tried to mend fences. Not that anyone believed him.

This morning Gibson denied saying what Ryder has claimed. 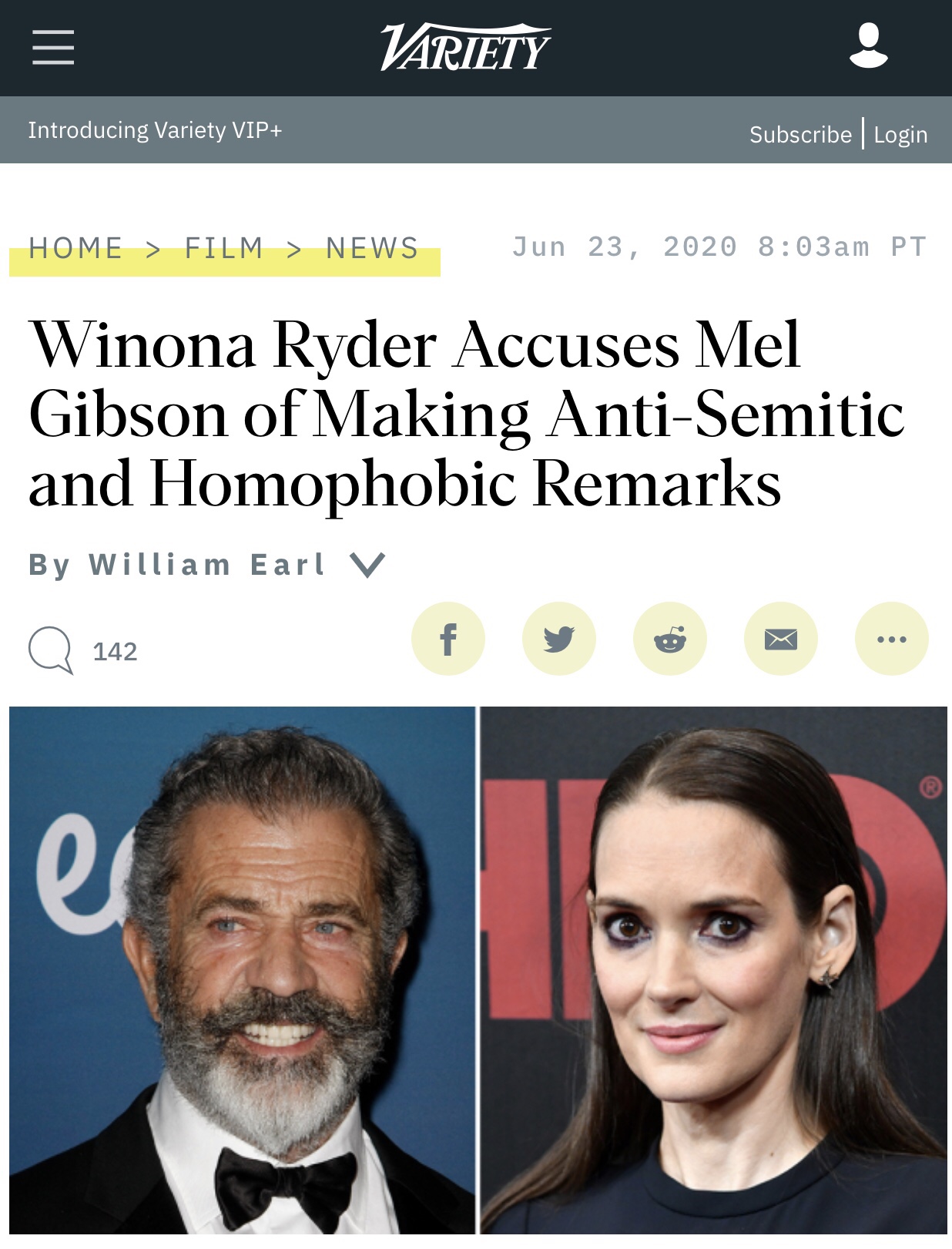