The Academy of Motion Picture Arts and Sciences has invited 819 actors and filmmakers to join up and pay their dues. The AMPAS membership tally now comes to now 9300. In keeping with recent patterns, the additions will further diversify the ranks. 45% of the fresh recruits are women and 36% are under-represented ethnic/racial minorities, for a total of 86%. The international (i.e., non-domestic) makeup of the new crew is 49% from 68 countries.

So are the remaining invitees who aren’t female or under-represented ethnic-racial minorities (what is that, 55% or less?) males or, God forbid, European-descended males with pale complexions?

As I understand the new-members situation, Scott Feinberg‘s Hollywood reporter headline — “Film Academy Invites 819 New Members, With 36 Percent People of Color” — isn’t quite right as the term “people of color” has been retired in favor of the above-mentioned URERM (i.e., under-represented ethnic/racial minorities).

For years the Academy has used the “person of color” term. Except that partly alluded, I’m told, to people of Spanish heritage and residence (i.e., citizens of Spain). In the eyes of the Academy, for example, Antonio Banderas was regarded (until today) as a person of color. Which is kind of odd as Spaniards are not “people of color” any more than Mick Jagger is. Anyone who’s seen a Pedro Almodovar film will tell you that while their hair is frequently dark (along with auburn, blonde and what-have-you), they all have fair, Wonder Bread-ish, Ozzie-and-Harriet complexions.

And so AMPAS is now going with the more egalitarian-sounding under-represented ethnic/racial minorities, which draws a sharper line. As long as they continue to keep white guy additions to a bare minimum, we’re good. 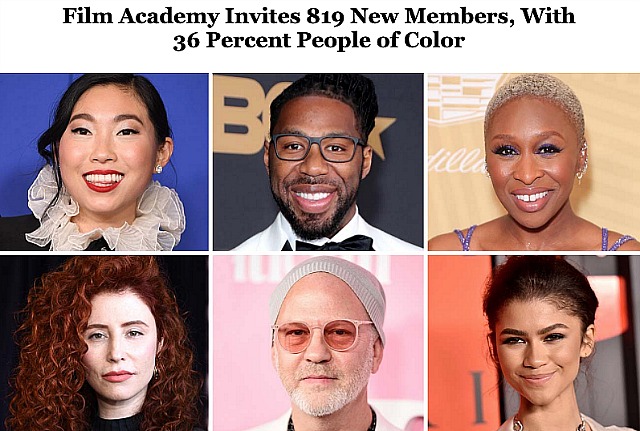 June 30, 2020by Jeffrey Wells31 Comments
« Previous post
All Spelled Out
Next post »
So Hathaway Got It Wrong?