How To Ship A Samurai Sword

For about 22 years I’ve been a proud owner of a real-deal samurai sword, a Claymore sword from Germany, and what I’ve been told is an 18th Century Barry Lyndon sword. And they’re all in good shape. I had the samurai sword re-sharpened about 15 years ago and it’ll split a hair.

Two days ago Dylan called to suggest that I send the sword to Jett for his 32nd birthday, which was yesterday. Dylan and Jett were totally into swords during the waning days of the Clinton administration, when they were nine and ten.

Dylan’s idea was that the samurai sword would connect Jett to those days, and how we hung out and went on car trips and attended screenings, etc.. So I decided to send the samurai to Jett in Jersey City and the Claymore to Dylan in Austin.

Around 4:45 pm I took them to a UPS store but the guy said he’s not allowed to send weapons. “Well, they’re technically weapons, okay, but not really,” I said. “They’re mainly relics of a distant past. Only Mel Gibson would regard them as actual weapons.”

He suggested FedEx, which was just down the street. I had to pack them first, of course, or the FedEx guys would say the same thing.

The UPS guy sold me a couple of tall boxes and masking tape and a bag of styrofoam peanuts. But I couldn’t wrap them in the store, he said. Out   to the parking lot. The wind was blowing and the peanuts were flying all over the place, but I eventually got it done.

The FedEx guys didn’t even ask what was in the boxes. A Thursday delivery was out of the question, but to ensure that the samurai would arrive at Jett’s Jersey City home by today I had to pay them $185 bills. And the box wasn’t even that heavy. 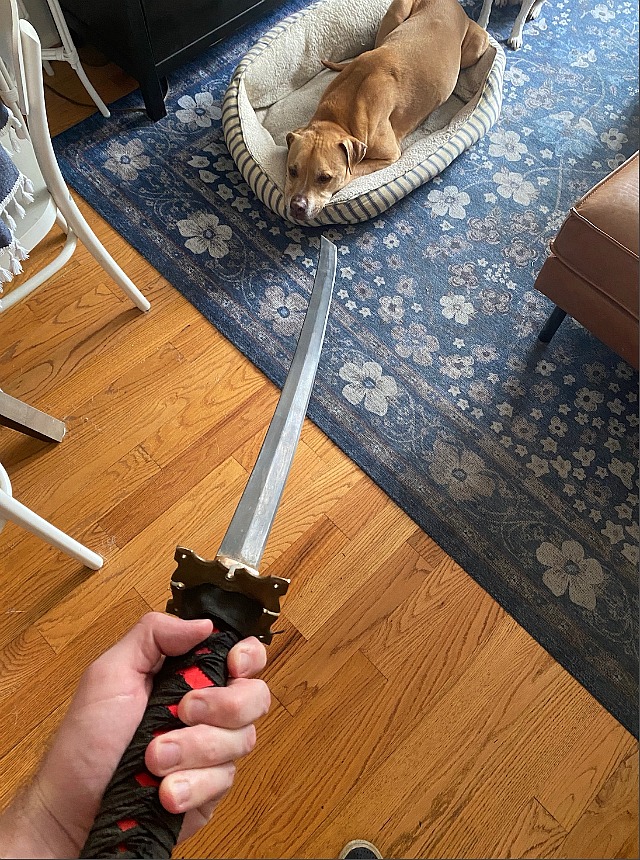