Humanists, Beware of the Rogen!

Yesterday Seth Rogen decisively bitch-slapped the “All Lives Matter” crowd…he stood his ground, gave no quarter and punched those bitches silly and set them straight, you bet.

Last night I posted a photo of a compassionate hand-painted sign in from of a Melrose Ave. storefront. The owner/proprietor, a 40ish woman with whom I’d briefly chatted a day earlier, had written “#Black Lives Matter” as well as (gasp!) “#HumansMatter.” Humans Matter in what fucking universe? If Rogen had driven by he might’ve slammed on the brakes, leapt out of his car, walked inside and read the riot act to that sad, deluded woman…given her a piece of his suffer-no-fools mind.

Soon after my “You Get What You Pay For” post appeared, “Aaron B” tried to explain things. “The phrase isn’t ‘Only Black Lives Matter,” he said. “Anyone who counters BLM with ‘All Lives Matter‘ is either (a) ignorant of the point or (b) racist.” 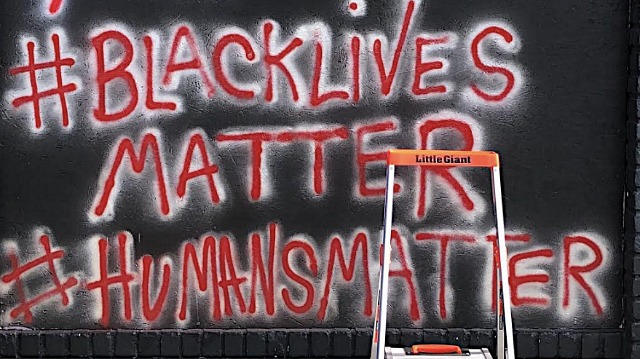 More Aaron B: “If someone whose mother is dying of cancer says ‘cancer is a terrible disease’ and your response is ‘yeah, but so is Alzheimer’s’, you are an asshole, despite being correct.”

HE response: “The female storekeeper who painted ‘humans matter’ is an asshole! Of course she is! And possibly a racist! Maybe we can cancel her ass!”

Aaron B: “You do see the BLM tag right above that, right?”

HE: “She just threw that in for cover, blowing smoke up our asses. She needs to be slapped around! ‘Humans matter’…bullshit! Yo, Seth! Bruh, can you straighten this incredibly insensitive woman out?”

Filmklassik to Aaron B: “Yes! Agreed! Some people are just too fucking dumb to know that two things can be true at the same time.

“For example, do you like to laugh? This is gonna tickle you: There are real, bona fide knuckle-draggers out there who claim that if you lament the destruction of innocent people’s businesses, then you, quote, ‘care more about property than you do black lives.’ I’m not kidding. In their puny little reptile brains, if you condemn one thing, it means you are implicitly endorsing the other.

“Disgusting, right? I’m with you. They really need to read your wonderful cancer/Alzheimer’s analogy. Maybe they’d gain a little perspective.”

June 3, 2020by Jeffrey Wells45 Comments
« Previous post
Tears Welled In My Eyes
Next post »
“You Get What You Pay For”