Most Wowser Oscar Year Ever

In yesterday’s “Oscars in April ’21…But Of Course!” piece, I speculated (and not all that brilliantly) that with the Sunday, 2.28 Oscar telecast expected to be postponed “by as many as eight weeks,” the new Oscar date will either be 4.18.21 or 4.25.21, which of course are both Sundays.

It was announced this morning that the Oscar telecast will indeed air on 4.25.21, and that the 2020 release year will be extended for a full two months, or until Sunday, 2.28.21. I’m assuming that the Academy voting deadline will come a week or so before 4.25. Let’s say Friday, 4.16 or Monday, 4.19. That will leave roughly seven weeks of campaigning between 2.28.21 and the voting cut-off.

What will this mean as far as the Phase One (pre-Oscar nomination) and Phase Two (post Oscar nomination) mindsets are concerned? I’ll tell you what it means. It means there will be two (click!), two (count em!), two Phase Ones and one Phase Two. 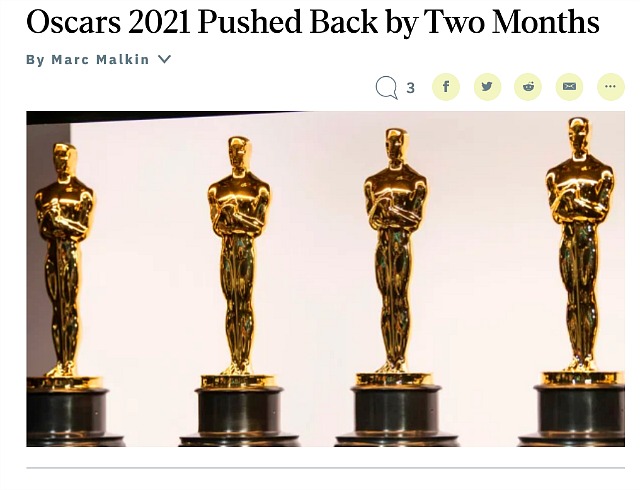 It also means that with the Telluride, Toronto, Venice and N.Y. film festivals sticking to their usual early fall dates, we’re looking at an extended award season that will last nearly eight months instead of the usual five-and-a-half or six (Labor Day to late February).

This is a one-off situation, remember. It’ll be back to business-as-usual for the ’21 and early ’22 Oscar year. We’re in uncharted territory, yes, but it’s not that hard to figure the angles and strategies.

To repeat, Phase One is not going to be shortened or pushed back — it’s going to expand. Remember that a good portion of the Oscar contenders are still going to “open” (even if that means a streaming debut) by 12.31.20. Today’s announcement is about accommodating the overflowers whose post-production skeds have been delayed by COVID.

But there won’t be any backing away from the traditional Phase One promotions of November and December. Parties and promotion-wise, people are 100% accustomed to Oscar season happening in November and December, partly if not largely because the holiday period is when the non-devotional dilletantes go to the movies (along with the summer).

So the traditional Phase One (call it Phase One A) will still happen in November-December, and then the brand-new Phase One B (which will naturally include some Phase One A repeats and redoublings) will kick off in late January and February.

And then, after the nominations are announced in early to mid-March, Phase Two will kick in, lasting from mid March to roughly April 16th or 19th, give or take.

So to summarize, we’ll be seeing two Phase Ones followed by a two-months-later-than-usual Phase Two. And then comes the most glorious Oscar telecast of all time on 4.25 — a Night of a Thousand Superstars with an up-with-Hollywood, “America needs movies and movies need America!”, rally-round-the-flag-boys esprit de corps that will be awesome to behold.

Blogaroo comment: “I think Jeffrey is likely wrong, for what it’s worth, unless theaters are wide open in Nov/Dec.

“I suspect that whenever there is a true theatrical window, they will start promoting for awards with that window. And if there is no real theatrical window, that no one will spend a dime until after New Years. Netflix might be the only buyer early, as they don’t care about theatrical and they might want to get out early.

“On the other hand, they have been burned by being the frontrunner the last two years so maybe a strategy change.

“My Phase One window used to start in October. It’s gotten shorter and more focused every year.

“I would expect all the other shows that nominate in December to push until February, at least. That is the primary reason we all got the Nov./Dec. ad buys anyway. That and theatrical release, so they could hide spending in those budgets.

“There are many variables still. But look for majors to hold until January unless there is a clear fall window.”

HE to Blogaroo: “For the last 20 years the world and ‘the business’ has been conditioned to expect award season to kick into high gear in November and December. Presuming that theatres will be fully back in action by the holidays, that traditional mindset and expectation will hold. American goes to the movies big-time over the holdays, and this is the time to begin promoting and celebrating the best of the year (i.e., Phase One). The only difference this time is that there will be a second Phase One in late January and February.