We’ve now witnessed two recent episodes in which New and Old Guard journalists have been sharply at odds. Believers in wokester activist journalism, a Millennial and Zoomer thing that’s about exposing racism, pollution, corruption and all the other social ills and in some cases indicting and/or cancelling old-schoolers (and particularly Trump-aligned righties), have clashed with defenders of traditional liberal journalism — basically a generational rift.

Episode #1 was about wokester N.Y. Times staffers condemning the opinion section’s decision to publish a somewhat rash opinion essay by Arkansas Republican Senator Tom Cotton (“Send In The Military“) that basically said the military should be brought in to stop looters.

Wokester staffers tweeted that running the Cotton piece “puts Black @NYTimes staff in danger”…really? Most Americans believe that the looting has been horrible if not ruinous, and that it should be stopped one way or another.

N.Y. Times columnist Bari Weiss explains the clash as follows: “The civil war inside The New York Times between the (mostly young) wokes and the (mostly 40-plus) liberals is the same one raging inside other publications and companies across the country. The dynamic is always the same. The New York Times motto is ‘all the news that’s fit to print.’ One group” — the 40-plussers — “emphasizes the word ‘all.’ The other, the word ‘fit.'” 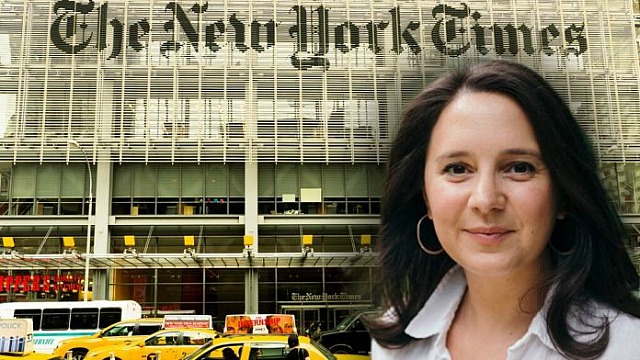 “The New Guard has a different worldview,” Weiss went on. “They call it ‘safetyism,’ in which the right of people to feel emotionally and psychologically safe trumps what were previously considered core liberal values, like free speech.”

Episode #2, which happened last night in Los Angeles, was about safetyism.

Variety editor Claudia Eller was forced to take a two-month administrative leave after a Twitter dispute with freelancer Piya Sinha-Roy about insufficient newsroom diversity. The flashpoint moment was when Sinha-Roy complained that “POC voices are constantly dismissed“, in response to which Eller took umbrage because she felt she and other Variety editors had conveyed an understanding of this complaint and a pledge to improve. “When someone cops to something why would you try and criticize them?,” she said to Sinha-Roy. “You sound really bitter.”

American voters are starting to figure some things out also. Scratch an under-40 wokester-progressive and you may find an ideological Stalinist who’s convinced that change can’t happen without slapping a few people around or even deep-sixing them. A day or two ago I equated this crowd with Tom Courtenay‘s “Strelnikov” character in Dr. Zhivago. I’ve said 50 times that we’re living through a period that’s not unlike the French terror, at least within wokester circles.

We’re also living through a certain strain of liberal hypocrisy in which progressives had insisted for nearly three months that strict social distancing had to be observed for God knows how long. This was followed by the partial collapse of social distancing (certainly among protestors) when it came time to march against systemic racism in the wake of the murder of George Floyd.

Drive though any major city now and you’ll see a whole lot of storefronts covered with plywood, plywood, plywood. Caused by looters but also by the George Floyd protestors who’ve given them cover. What kind of impact is this going to have on Average Joe voters? The vast majority is appalled by racially-driven police brutality and support the demonstrations, but at the same time they don’t like the way plywood has totally taken over.

What would be the right proportional makeup of a properly diverse newsroom, by the way? Should the racial makeup of a newsroom reflect last year’s U.S. census figures, which stated that whites comprise 60.4% of the population with other tribes close to 40% (African Americans 13.4%, Hispanic-Latino 18.3% and Asians 5.9%, etc.). Or is journalism a different kettle of fish? How should it work exactly?

In my view, Weiss is one of the few serious truth-tellers within the N.Y. Times community when it comes to wokesters vs. traditionalists. 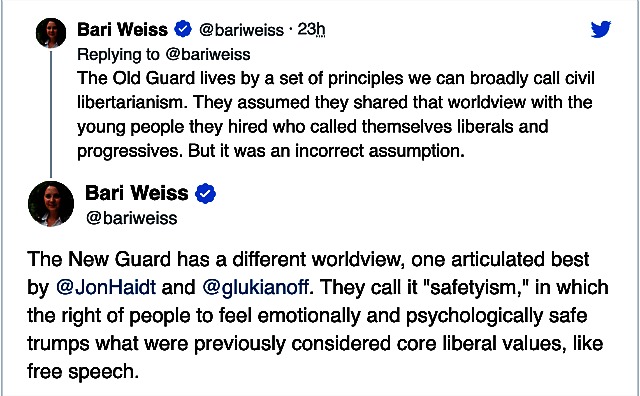 June 5, 2020by Jeffrey Wells43 Comments
« Previous post
Put Out The Fire
Next post »
Not Far From Nightly Truth