George Szalai, the Hollywood Reporter‘s international business editor, may have faced tough questioning earlier today from #MeToo wokesters. Reports of chanting protests and picketing outside THR‘s London offices could not be confirmed, but there was no question that Szalai had given great offense for failing to mention an alarmed response to the 2020 San Sebastian Film Festival’s decision to premiere Woody Allen‘s latest, Rifkin’s Festival.

The fact that the Variety and Deadline stories have not only mentioned wokester concern but have used the same term to describe it (i.e., “raised eyebrows”) has raised eyebrows. Both publications are owned by Penske Media Corporation.

A spokesperson for #DeathtoWoodyAllen sent the following statement to Hollywood Elsewhere: “The indifference that Szalai has shown about the urgent matter of Allen’s guilt or innocence in the matter of Dylan Farrow‘s alleged molestation in August 1992 is callous and irresponsible.

“The fact that only #MeToo fanatics believe there’s any truth to Farrow’s and Mia Farrow‘s charge is immaterial. The fact that Szalai and The Hollywood Reporter didn’t even allude to the 1992 allegation or Allen’s reputation in the wake of it indicates blithe disregard for #MeToo and the worldwide…okay, the national community of Allen haters. An investigation is clearly warranted.” 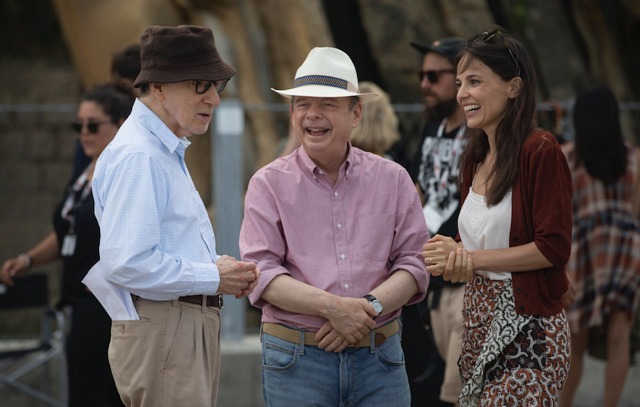 (l. to r.) Woody Allen, Wallace Shawn and Elena Anaya during San Sebastain filming of Rifkin’s Festival during summer of ’19.