Schumacher To Indiewire: Thanks, Guys!

Joel Schumacher text message from heaven to Indiewire‘s Ryan Lattanzio: I don’t mind saying that in life I was a better-than-capable director and sometimes a first-rate one. The Client, A Time to Kill, Tigerland, Phone Booth, Veronica Guerin, The Phantom of the Opera, Trespass, etc. But my finest and most confident film — ask anyone — was Falling Down (’93), an angry-white-man drama starring Michael Douglas and Robert Duvall.

Falling Down didn’t have bat nipples or butt shots, but it was sly sociology and the most on-target, perfect-pocket-drop film I ever made — and one that connected with the culture in some kind of resonant and fundamental way. It came out 27 years ago and it feels like it was yesterday. Especially in heaven where there’s no sense of time anyway.

But then 2020 rolls in and I finally succumb to cancer and arise into the clouds, and the first thing I see when I arrive (they have iPads up here) is your Indiewire obit, and you don’t even mention Falling Down? Because…what, it’s not politically correct to pay respects to or even mention a movie about an angry white guy? Because middle-aged white dudes are regarded as bad news by wokesters, BLM-ers and #MeToo-ers…right?

I’m sure you’re a nice guy, Ryan, but this is why some people hate Indiewire. Because sometimes it tries to editorially convey a certain view of life. It observes but also instructs to a certain degree. Because it’s Woke Central, progressive to a fault, the People’s Central Committee, etc.

And on top of this your obit headline highlights three of my lesser achievements — St. Elmo’s Fire, The Lost Boys and Batman Forever? I don’t mind if people associate my career with the two Batman films and maybe have a laugh, but I don’t want to be “remembered” for them, if you catch my drift.

I did better, and I’m truly angry that you ignored my ultimate work. I’ve always held myself in check on earth and was certainly never one to lose my temper, but if I could come back to earth right now I would find the Indiewire offices and walk up to your desk and give you the dirtiest look imaginable. And I would hold it for a full minute. 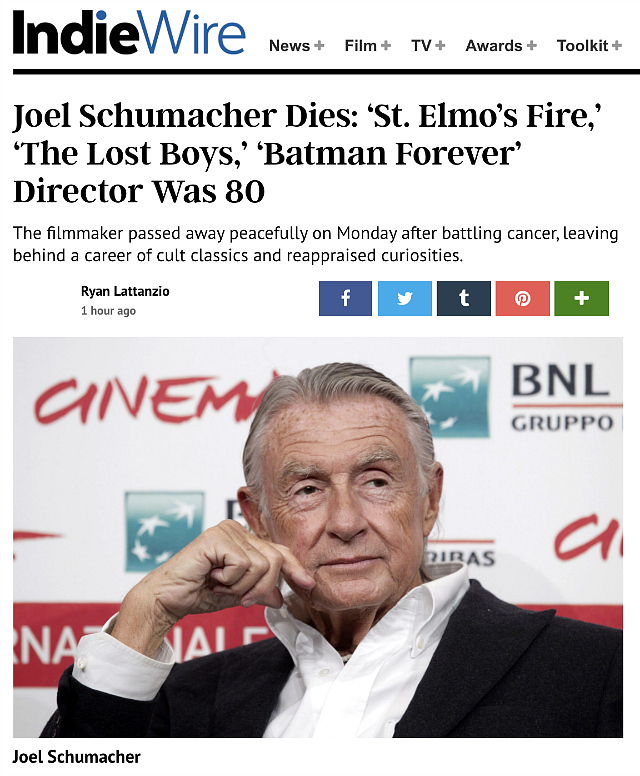