Netflix was allegedly concerned about the cost of using an expensive 16mm film stock that gave the picture a “chrome look,” which Lee was insisting upon. That plus having to send the 16mm footage from Vietnam/Thailand to the U.S. for “processing at a specific lab” added to an allegedly burdensome price tag.

I have a semi-sophisticated eye when it comes to exotic or old-time film stocks, and all I thought when I saw the 16mm footage in Da 5 Bloods was “okay, Spike shot in 16mm to make it look 50 years old.” I didn’t say to myself “holy shit, what a super-authentic 16mm chrome look!” I’ll bet there are no more than 75 people on the planet earth who can tell the difference between regular, old-style 16mm footage and 16mm “chrome” footage, whatever the hell that looks like.

In other words, 99.9% of the viewing audience wouldn’t recognize 16mm chrome footage if it shook them by the lapels.

I don’t know what the 16mm costs of Lee’s film came to. Maybe they were considerable and maybe not. But if I was a Netflix exec riding herd on Da 5 Bloods, I would have said to Spike, “Okay, but why do we have to spend hundreds of thousands on exotic 16mm film plus expensive processing when you could shoot your ’60s sequences on a regular 4K digital camera and then use 8mm, an app that I have on my iPhone, to make it look like 16mm? Very few would know the difference.”

As for Netflix telling Lee that it wouldn’t pay to de-age the four long-of-toothers (Delroy Lindo, Jonathan Majors, Clarke Peters, Isiah Whitlock Jr.) for Vietnam flashback combat sequences, I for one thought it was cool and daring that Lee didn’t do the usual usual.

Friendo: “This is such a blatant example of virtue-signaling tweeting. The Irishman had De Niro/Pacino/Pesci — Da 5 Bloods’ biggest star is Delroy Lindo.” 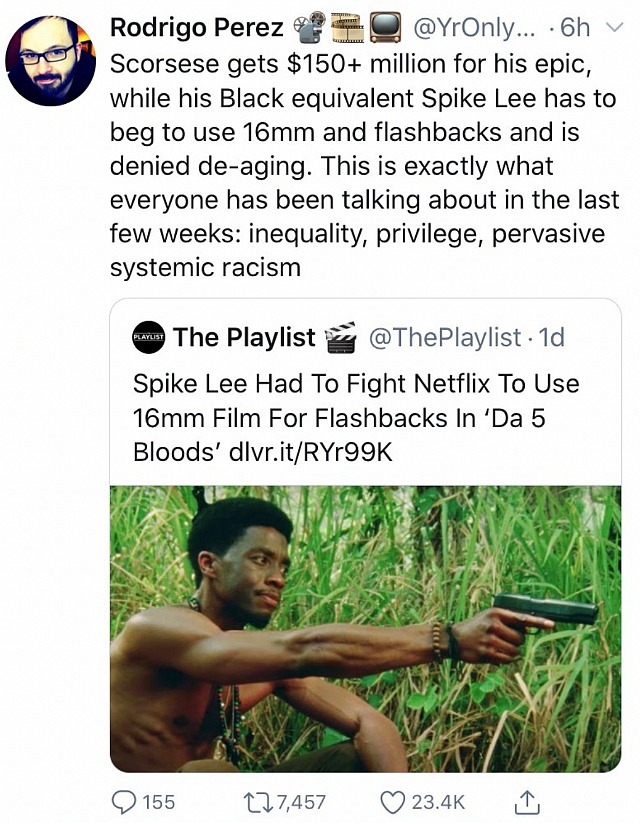