On 6.20 (only five days ago!) Paul Schrader wrote on Facebook that he’s “troubled by the double standard. We encourage multiracial casting — black Romeos with white Juliets, a female Lear, etc. Yet when a non-Jew plays Shylock or a white plays Othello, this is considered outre and unacceptable.”

HE reply: “Whites may no longer portray non-whites” is fuck-you payback for all the decades (early to mid 20th Century) when whites portrayed other tribes and races with impugnity in films. No one mentions Marlon Brando as Sakini, a native Okinawan, in Teahouse of the August Moon, or Katharine Hepburn as Jade in Dragon Seed, but whitewashing was once par for the course.

Not out of inherently venal reasons, but banal ones. Because Hollywood producers believed that non-white actors would, in many circumstances, diminish box-office returns and that white actors would enhance them.

Don’t forget, however, that as recently as ’07 Angelina Jolie played Mariane Pearl, a French-born woman of Afro-Cuban descent, in A Mighty Heart, and nobody said boo.

How was this different than Mickey Rooney‘s Japanese landlord in Breakfast at Tiffany’s, Alec Guinness‘ Prince Feisal in Lawrence of Arabia, Ricardo Montalban‘s Japanese Kabuki actor in Sayonara, Natalie Wood‘s Maria in West Side Story, Kurt Jurgens‘ “Captain Lin Nan” in Inn of the Sixth Happiness and Jennifer Jones‘ half-Native American in Duel in the Sun? Should wokesters retroactively cancel Jolie? Should they at least take her to task on Twitter?

In a tribal sense, whites are regarded as deeply flawed and generally problematic. Certainly by the standards of cancel-culture and BLM wokesters. Perhaps not the root of all evil, but the N.Y. Times‘ “1619 Project” made a case that European-descended white-person culture represents a profoundly diseased and guilty heritage, certainly as far as African Americans and Native Americans are concerned.

White actors can therefore not play persons of color for this reason. They must sit on the sidelines and meditate on their basic nature, and perhaps eventually evolve into something better down the road.

Given the alleged racism on the part of John Wayne, the ultimate conservative swaggering white man, I wouldn’t be surprised if Wayne’s horse-riding statue (at the corner of Wilshire and La Cienega) is someday pulled down or defaced by demonstrators. I’m serious — in a world in which a statue of George Washington was defaced and statues of Ulysses S. Grant and Francis Scott Key have been toppled, Wayne should be easy pickings. 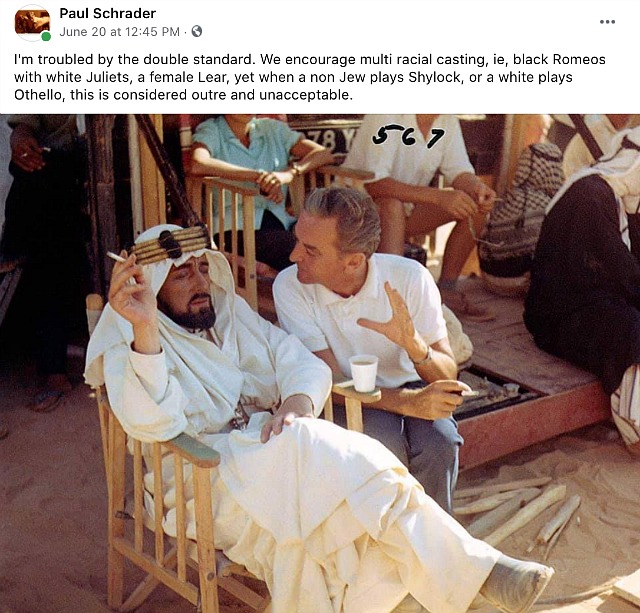