In a 6.12 piece called “The American Press Is Destroying Itself“, Matt Taibbi has nailed the current p.c. zeitgeist, and his observations are downright frightening.

“The American left has lost its mind, [having] become a cowardly mob of upper-class social media addicts, Twitter Robespierres who move from discipline to discipline [while] torching reputations and jobs with breathtaking casualness.

“The leaders of this new movement” — the BLM absolutists, Millennial wokester “safeties” and their terrified chickenshit allies — “are replacing traditional liberal beliefs about tolerance, free inquiry, and even racial harmony with ideas so toxic and unattractive that they eschew debate, moving straight to shaming, threats, and intimidation. They are counting on the guilt-ridden, self-flagellating nature of traditional American progressives, who will not stand up for themselves, and will walk to the Razor voluntarily.

“They’ve conned organization after organization into empowering panels to search out thoughtcrime, and it’s established now that anything can be an offense, from a UCLA professor placed under investigation for reading Martin Luther King’s ‘Letter from a Birmingham Jail’ out loud to a data scientist fired from a research firm for — get this — retweeting an academic study suggesting nonviolent protests may be more politically effective than violent ones! And now this madness is coming for journalism. 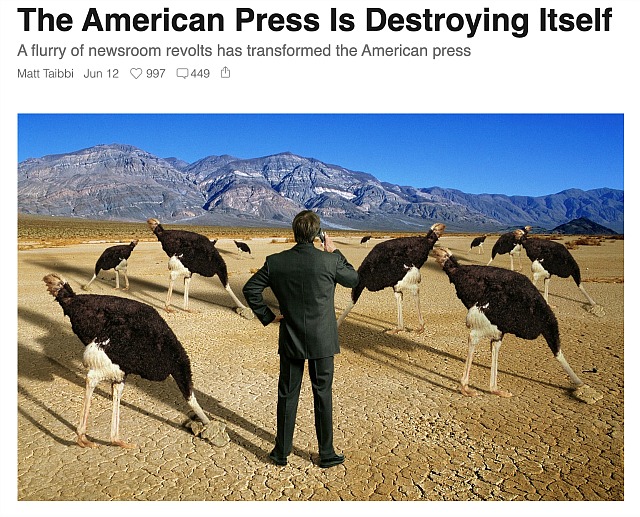 “Beginning on Friday, June 5th, a series of controversies rocked the media. By my count, at least eight news organizations dealt with internal uprisings (it was likely more). Most involved groups of reporters and staffers demanding the firing or reprimand of colleagues who’d made politically ‘problematic’ editorial or social media decisions. The New York Times, the Intercept, Vox, the Philadelphia Inquirier, Variety, and others saw challenges to management.”

Please read the whole thing, but the bottom line (and just because Mark Harris might disagree with this notion doesn’t mean it’s not true) is that the progressive left HAS lost its mind, and you don’t have to be a conservative or (God forbid) a Republican to acknowledge this. I began as a good Democrat in my tweener and teen years, and I’ve regarded myself as left-leaning iconoclast since I was 20 or thereabouts. But over the last two or three years calling myself a staunch leftie has become untenable. Because the left has gone lunatic.

These people are beyond scary, and yet the idea that come November voters will have to choose between allowing these progressive banshees free reign and giving another term to the salivating, sociopathic racism and curdled delusion of Donald Trump is a false scenario.

The thing to cling to in this surreal hurricane is sensible, skeptical, carefully measured liberalism — the kind that isn’t so terrified of being accused or white privilege and/or racism that a semblance of reality actually penetrates the cerebellum. I’m talking about the Bill Maher, Joe Rogan (except for his hateful dismissals of Doddering Joe), Matt Taibbi, Jordan Peterson, Sam Harris, Brett Stephens, Bari Weiss, Sasha Stone, Richard Rushfield, Jordan Ruimy and Katie Herzog cabal.

Boiling it down to eight words, I really can’t be a leftie any more. Because the 21st Century “woke” terror (named in honor of Maximilien Robespierre and the “French reign of terror” of the 1790s) has become too manic, too smothering, too horrifying.

I’ll never be a rightie (I took too many acid and mescaline trips in my 20s for that to ever happen) and the idea of being a comme ci comme ca centrist sounds boring as hell. I just know that the shrieking, accusatory, career-cancelling, sensitive-to-a-fault left has gone around the bend and over the waterfall. They’re just as unhinged and foam-at-the-mouth frightening as the bumblefuck Trump supporters who will attend the Tulsa rally on Juneteenth (i.e., Friday the 19th).

And while I still trust the N.Y. Times‘ reporting on foreign matters, COVID and climate as well as book, film and theatre criticism, I don’t trust them at all in terms of reporting about our domestic racial turbulence and certainly not on the opinion pages — they’ve totally gone over to the regimented BLM-filtered side and are now representing the activist journalism fraternity in this respect.

To bring it all back home, Taibbi has written that “people depend on [journalists] to tell them what we see, not what we think. What good are we if we’re afraid to do it?”

Caveat #1: Two portions of the Christopher Steele dossier haven’t been verified or may be partly or wholly untrue (Michael Cohen secretly meeting with Russian guy in Prague, the alleged pee tape episode) but that doesn’t mean that the entirety of the Steele dossier is “discredited,” as Taibbi claims.

Caveat #2: Nor was the Mueller Report free of damning conclusions about the Trump campaign: 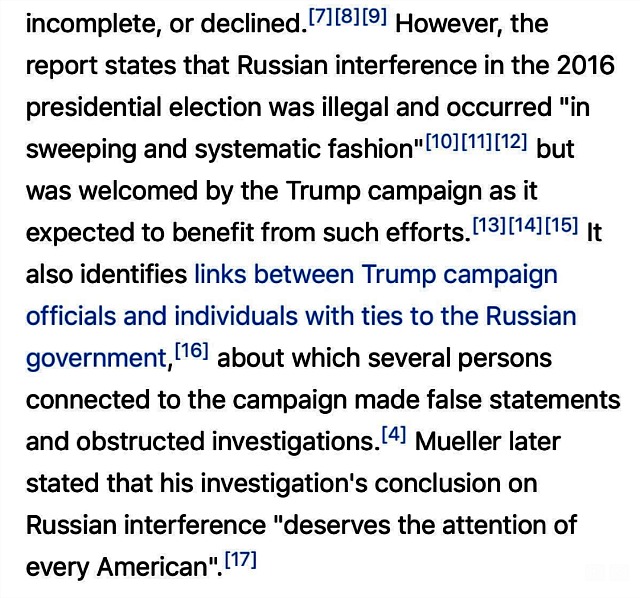 Richard Rushfield: “I agree with everything in Matt Taibbi’s piece except he’s wrong that [wokester hystericalsim] is why Claudia Eller was furloughed [by Variety]. I know it’s tempting when a trend is out there to want to throw everything in that basket. And I don’t argue with the analysis of the trend. Unfortunately as a reporter I have to respect facts above narrative and those just aren’t the facts in this case. Sorry if it ruins a better story but that’s just how it is.”

From 6.12 Bret Stephens column, “What The Times Got Wrong”: “As important as it is to try to keep people safe against genuine threats, it is not the duty of the paper to make people feel safe by refusing to publish a dismaying Op-Ed. Even if one concedes that Cotton’s call to send in the troops poses potential risks, it poses those risks whether his call appears in these pages or not. To know Cotton’s views is, if nothing else, to be better armed against them.

“The same goes for any other type of knowledge, however unpleasant: Having more of it is always a source of strength — a belief that lies at the core of our profession.

“Or, I should say, used to. There is a spirit of ferocious intellectual intolerance sweeping the country and much of the journalistic establishment with it. Contrary opinions aren’t just wrong but unworthy of discussion. The range of political views deemed morally unfit for publication seems to grow ever wider.

“Arthur Miller once said a good newspaper is ‘a nation talking to itself.’ What kind of paper will The Times be if half the nation doesn’t get to be even an occasional part of that conversation?”